Health officials added four more bars and clubs in Itaewon to their Covid-19 hot spots after tracing patients to them, up from the five previously known clubs in the multicultural neighborhood in central Seoul.

The four new places are Made, Pistil, Pink Elephant and Fountain. The five previously known places were King Club, Queen, H.I.M, Trunk and Soho. The latter group of clubs are clustered near Itaewon Station’s exit No. 3, while Pink Elephant and Pistil are near exit No. 4 and Fountain is behind the Hamilton Hotel at exit No. 1.

Made is farther away from Itaewon Station — about 390 meters (1,280 feet) from exit No. 2 — which raises the possibility that infected people spread the disease in that part of Itaewon. 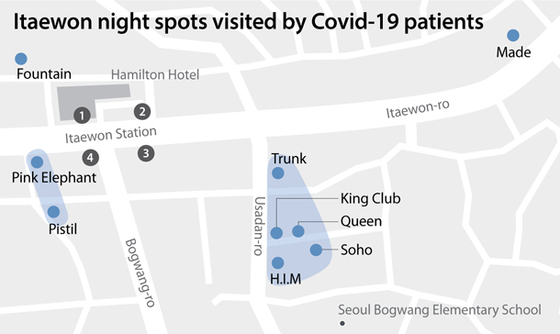 The Yongsan District Office, whose jurisdiction includes Itaewon, said Wednesday it was collecting lists of visitors each club and bar had compiled — in compliance with government health guidelines — to track them down and deploying other contact tracing methods such as card transactions in case the numbers turn out to be fake.

Itaewon is a commercial area known for its international cuisine and vibrant nightlife, including an area popular with the LGBTQ community, and is also home to many foreigners, including diplomats. Many of the clubs that saw their customers infected were frequented by gay men, part of which explains why some partygoers wrote down fake phone numbers at the entrances.

By Wednesday noon, there were 119 patients connected to the Itaewon cluster, up by 17 from Tuesday noon as health officials and police scramble to track down young people who partied in Itaewon between late April and early May.

Health authorities said Wednesday they were starting to discover tertiary infections from the Itaewon hot spot, stressing this week was a crucial time to bring the cluster under control.

The cluster first emerged on May 6, a day after Korea’s holiday week came to an end, when a 29-year-old Korean man from Yongin, Gyeonggi, tested positive for the coronavirus after visiting five different clubs and bars in Itaewon from 11 a.m. on May 1 to 4 a.m. on May 2.

The Korea Centers for Disease Control and Prevention (KCDC) said that by Wednesday noon, 119 people have been traced to the Itaewon cluster, 76 of whom got infected after visiting one of the nine Itaewon clubs and bars. The rest were people who came into contact with the 76, including their friends, relatives and colleagues.

Among the 119 patients, 69 live in Seoul, 23 in the surrounding province of Gyeonggi, 15 in Incheon, five in North Chungcheong,  four in Busan and one each in North Jeolla, South Gyeongsang and Jeju Island.

In terms of Korea’s daily infections, the KCDC announced that 26 people tested positive for Covid-19 Tuesday, four of whom represented imported cases. Of the 22 domestic cases, 18 were connected to the Itaewon cluster, while the rest were unrelated.

By Tuesday midnight, 259 people had died, up by one from the previous day, while 9,695 people have been declared fully recovered, up by 25 from the day before. Of Korea’s total 10,962 patients, 1,142, about 12 percent, contracted the coronavirus while overseas, KCDC data showed, mostly from the United States or Europe.

As for the Itaewon cluster, health officials still don’t know for sure how the coronavirus penetrated the clubs and bars.

Up until Monday, health officials had believed the 29-year-old Yongin man was the initial spreader of the coronavirus because he was the first person to exhibit symptoms of the virus on May 2. But that narrative changed Tuesday when officials said they discovered another Covid-19 patient related to the Itaewon cluster who came down with symptoms on May 2. No person connected to the Itaewon hot spot exhibited symptoms earlier than May 2.

Health authorities did not specify Tuesday who that other person was and said they weren’t sure whether his or her routes overlapped with the Yongin man, saying further contract tracing was needed.

“We think there may have been several epicenters in the Itaewon cluster, not just one,” said KCDC Deputy Director Kwon Jun-wook. “If that’s the case, that means silent transmissions [of Covid-19] had been going on in local society before the holidays and the virus penetrated crowded environments” like Itaewon clubs and bars to cause so many infections recently, said Kwon.

The Seoul Metropolitan Government has been advising anyone who visited or “went near” clubs and bars in Itaewon from April 24 to May 6 to get tested even if they aren’t feeling symptoms of the virus, reassuring people of the LGBTQ community their names will be withheld. Covid-19 tests in Korea are free of charge in many circumstances.

Officials in Incheon, right next to Seoul, were on high alert Wednesday when it was revealed that a 25-year-old Korean hagwon (cram school) instructor in Yonghyeon-dong, Michuhol District, tested positive for the coronavirus last Saturday after visiting King Club from the night of May 2 to the early morning of May 3, some 24 hours after the Yongin man went.

The Incheon hagwon teacher did not feel any symptoms of the coronavirus but got tested last Friday anyway upon hearing news about the cluster and received his positive results the next day.

What created controversy in Incheon, however, is the fact that he initially lied about being a hagwon instructor and told Incheon health officials he was “unemployed,” the city’s office said Wednesday.

Upon realizing that his testimony didn’t match his claimed travel history, Incheon officials said they asked police for help in tracking his mobile phone GPS history and used that information to pressure the instructor to tell the truth.

He then confided he teaches at Seum Hagwon in Michuhol District and is a private tutor in Yeonsu District, Incheon. 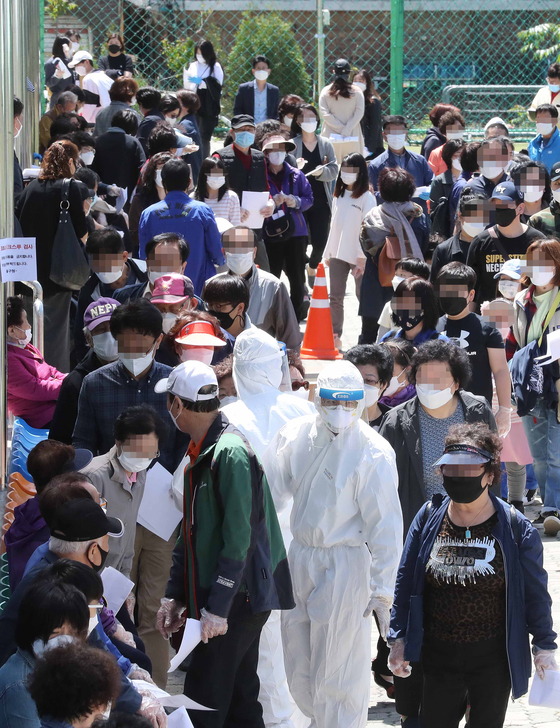 Students of Seum Hagwon and adherents of Palbok Church wait for Covid-19 testing at the Michuhol District Office in Incheon Wednesday upon hearing their members tested positive. The infections were traced to a Seum Hagwon instructor who visited King Club in Itaewon-dong, central Seoul, early this month. [NEWS1]

Health officials informed his students and colleagues and ran virus tests on them, and at least 11 showed positive results so far: five high school students and a colleague at his hagwon; the middle school student he tutors, her twin brother, mom and the sibling’s other tutor; and an acquaintance.

Contract tracing is ongoing, but Incheon officials said at least two people the hagwon instructor transmitted the virus to had gone to different churches lately, sparking fears of further transmissions. The two Presbyterian churches are the Palbok Church in Michuhol District and the Onsarang Church in Dong District, Incheon.