The SMC hot spot grew from six last Thursday to nine on Sunday, while the Itaewon cluster rose from 206 Thursday noon to 225 Sunday noon.

All three new cases at SMC, one of Korea’s five largest hospitals, were traced to a pub in the Gangnam area, visited by one of four nurses at SMC who contracted the coronavirus. Two are workers at the bar and the other is a relative of one of the workers.

Among 19 new cases connected to the Itaewon cluster, only one was a person who visited a club or bar in the neighborhood of Yongsan District, central Seoul, earlier this month, while the rest were relatives, colleagues or friends of someone who visited the area.

Many of the new infections traced to Itaewon specifically came from a sub-cluster of infections surrounding a private cram school (hagwon) instructor in Incheon who partied in an Itaewon club. The number of Covid-19 cases traced specifically to the Incheon hagwon instructor rose to 46 as of Sunday, up by 16 from last Thursday.

The instructor, who lives in Michuhol District, Incheon, left of Seoul, was diagnosed with Covid-19 on May 9 after visiting King Club and another unidentified bar in Itaewon on May 2 and 3, around the same time the initial spreader of the virus in the Itaewon cluster went to five clubs and bars, which included King Club.

The Korean instructor lied to epidemiologists when he later came down with symptoms of Covid-19, claiming he was “unemployed,” delaying contact tracing of his students and their acquaintances. They spread the disease in their local communities, including at coin noraebang joints, booth-type singing rooms where people to go to sing alone or in pairs.

Customers at coin noraebang stores are normally charged by the number of songs, rather than by the hour as in a standard noraebang. Coin noraebang businesses are also usually unmanned, which, in the time of the coronavirus pandemic, means they are less likely to be sanitized between customers.

Incheon announced an effective two-week operation ban on all coin noraebang in the city last Thursday, and the Seoul Metropolitan Government followed suit last Friday, but said its operation ban would last indefinitely until the Seoul mayor allows them to reopen.

It was the second time Seoul announced an indefinite operation ban on a type of business during the pandemic. On May 9, three days after the Itaewon cluster emerged, Seoul government announced all clubs, hostess bars and other nightlife businesses that involve drinking and dancing in the city would shut until the Seoul mayor says otherwise.

The province of Gyeonggi, which surrounds Seoul, relayed a similar ban last Saturday, saying all coin noraebang joints, nightclubs, hostess bars and any other nightlife businesses that sell liquor and involve dancing or singing will be forced to shut down for two weeks, a measure that impacts some 8,400 establishments. 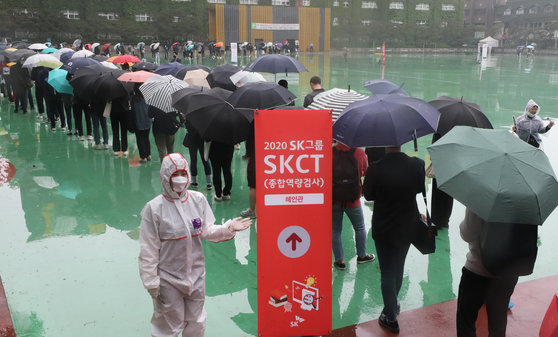 Applicants for jobs at SK Group are told to keep a distance from one another on Sunday while queuing up to enter a building at Seokyeong University in Seongbuk District, northern Seoul, to take a written test. [NEWS1]

As for the SMC hot spot, health officials said they still don’t know for sure how the virus penetrated the hospital, but that it seems one of the four nurses who got infected brought the virus inside the medical facility after visiting the Gangnam area.

Kwon Jun-wook, deputy director of the Korea Centers for Disease Control and Prevention (KCDC), said Saturday during a press briefing that anyone who visited Holics, Akbari or SBS Noraebang on May 9 or 10 should go get tested for the coronavirus even if they’re not feeling any symptoms.

Holics is the pub where the two workers were infected.

In regards to the sub-cluster circling the hagwon instructor, officials said they were tracing more infections to a buffet restaurant in Bucheon, Gyeonggi, named Raon Buffet Party House, which was visited by a taxi driver in Incheon who got infected by his 17-year-old son.

The son visited Top Coin Noraebang on the second floor of the Vision Plaza building in Michuhol District, Incheon, earlier this month. That same coin noraebang was previously visited by a 17-year-old high school student who contracted the coronavirus after attending the hagwon instructor’s class.

The 49-year-old taxi driver, who freelances as a photographer, visited the Bucheon buffet hall on May 9, 10 and 17 after he was hired to take photos of events taking place there, and several people who attended those events recently came down with symptoms of Covid-19.

In Hanam, Gyeonggi, a 56-year-old woman who’s a colleague of a 47-year-old man, whose son visited Top Coin Noraebang, got infected as well. Health officials warned anyone who visited the coin noraebang or buffet hall recently to get tested for Covid-19. 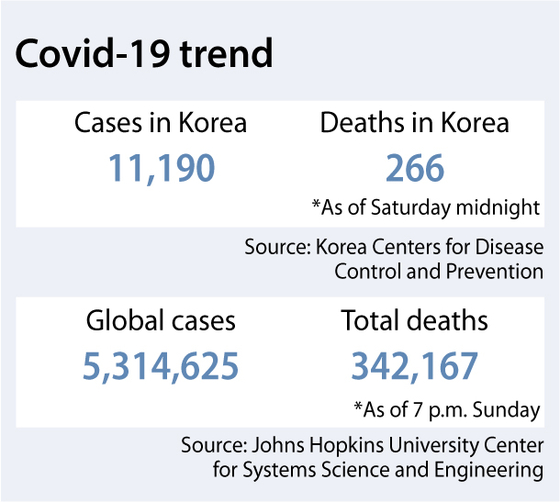 As summer approaches amid the pandemic, many local government offices across the nation have announced plans to delay their official openings of beaches about a month later than previous years, from early June to early July. Beaches in Korea are technically open to public visitors around the year, but for popular ones, local government offices set official opening dates during which they deploy lifeguards, organize concerts and allow vendors to rent parasols.

The Ministry of Education announced Sunday that kindergartners and students in the first, second, ninth and 11th grades will go to school this Wednesday as planned for the first time since the pandemic, a week after 12th graders began going to school.

Korea added 25 new infections Saturday, eight of which were imported, bringing the country’s total case load to 11,190, according to data from the KCDC. By Saturday midnight, 266 people had died, while 10,213 people have been declared fully recovered.