The think tank of the main opposition United Future Party (UFP) has concluded that there is no strong evidence to back allegations raised by conservative opinion leaders and one of its lawmakers about voting rigging in last month’s general elections, sources of the party told the JoongAng Ilbo on Wednesday.

“After the general elections, a senior party official said various suspicions were raised about election fraud and ordered us to look into them,” a key official of the Yeouido Institute told the JoongAng Ilbo. “We’ve investigated and analyzed the allegations internally.”

According to the source, the institute looked into allegations raised by some conservative YouTube content creators that fraud was committed in the April 15 general elections, where the ruling Democratic Party (DP) and its satellite Citizen Party together won 180 seats in the 300-member legislature. The conservative UFP and its satellite Future Korea Party won 103.

Some YouTubers said the DP won 63 percent in early voting while the UFP won 36 percent in some districts in Seoul, Incheon and Gyeonggi, arguing that it is statistically impossible. They also said ballot boxes were not properly managed before the count.

“We concluded that there is a need to point out the shortcomings in ballot box management and the early voting system, but there is not enough evidence to argue that there was election fraud,” said a UFP official who participated in writing the report.

The report also concluded that it was a coincidence that the DP and the UFP won the same ratio of votes in some districts, another UFP official said. “The institute said we must act carefully before raising suspicions about such sensitive issues,” he said.

The institute has not made public the report. “It is an internal report to preemptively look into some suspicions raised immediately after the general elections,” said an institute official. “Some suspicions were newly raised since then, and we didn’t spend a long time fully investigating them. So, we cannot reveal this report.”

Despite the Yeouido Institute’s conclusion, an outgoing lawmaker of the UFP persistently challenge the integrity of the latest elections. Rep. Min Kyung-wook, defeated by his DP rival in Incheon’s Yeonsu B District, said he has strong suspicion about election fraud.

Min, a former KBS reporter who served as spokesman of the Park Geun-hye Blue House, held a press conference on Monday and presented what he called material evidence to the suspected vote rigging. After showing six proportional representation election ballots, Min said the early voting was manipulated. 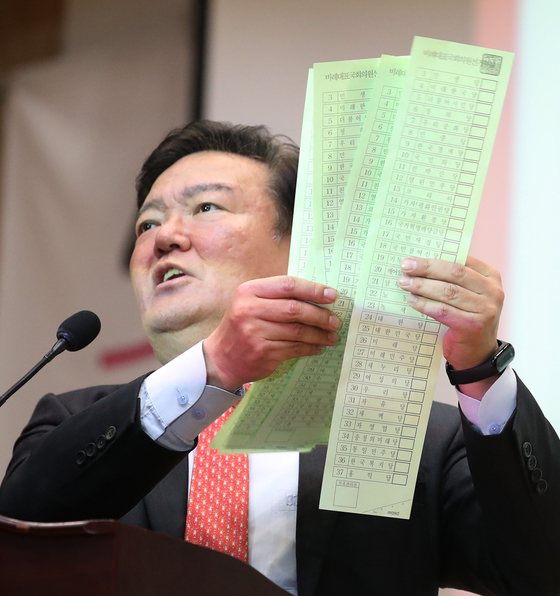 “An early voting ballot is supposed to be printed out whenever a voter arrives, so there should have been no leftover ballots,” Min said. “The fact that I am holding these ballots is proof that the election was rigged.”

He also showed a plastic bag full of shredded papers. “This was found in front of a post office in Gyeonggi. These are shredded early voting ballots,” he said.

The National Election Commission (NEC) confirmed Tuesday that the six ballots Min had presented were leaked from its branch in Guri, Gyeonggi. “We learned that six ballots of proportional representations were missing in District 2 of Guri’s Sutaek 2-dong,” the NEC said Tuesday.

“A bag storing leftover ballots and other election-related documents was temporarily stored in the gym of the ballot counting station, and we believe someone stole it.”

The NEC asked the prosecution to launch an investigation into the stolen ballots. Prosecutors at the Uijeongbu Branch Office have been assigned to the case.

Min refused to disclose how he came to have the ballots because he wants to protect the source. “The NEC didn’t even know that the ballots were missing,” Min told the JoongAng Ilbo.

He wrote in a Facebook posting that he welcomes a police or prosecution investigation. “That means an investigation will start on the rigged election,” Min wrote. “I will sacrifice myself to protect democracy. Come and get me.”

He also wrote that he will pay money to tipsters who offer smoking-gun evidence.

Last week, Min, who suffered a narrow defeat against the DP’s Chung Il-young, filed a lawsuit to invalidate the outcome. He won 39.49 percent, while Chung won 41.78 percent.

The Supreme Court will rule on the petition. The ruling will be final and no appeal is allowed. 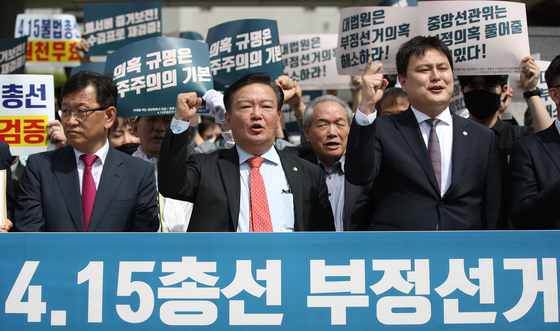 Rep. Min Kyung-wook, center, holds a rally in front of the Supreme Court on May 7 before filing a suit to invalidate the outcome of the April 15 general elections. Min lost to his DP rival Chung Il-young last month. [YONHAP]

On April 28, the Incheon District Court accepted Min’s request to preserve ballots in the district. CCTV records of the storage process of early voting ballot boxes and the ballot counting process were also ordered to be preserved and stored at the court. 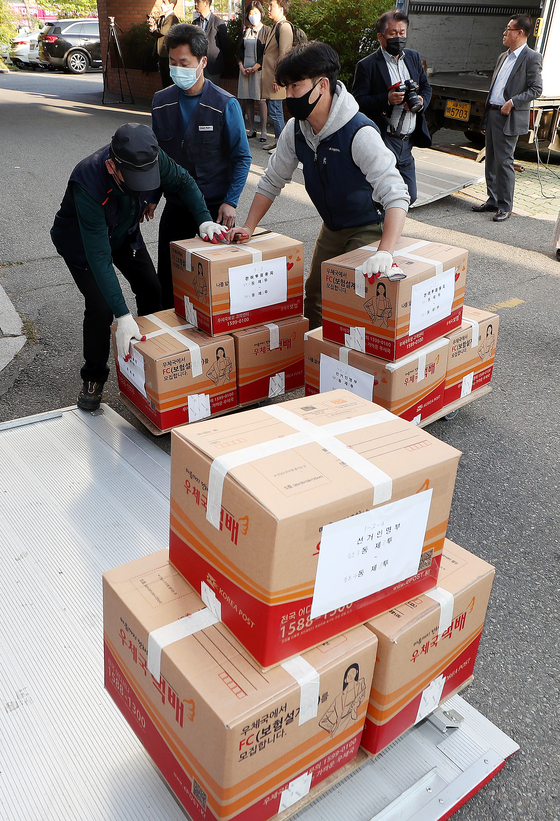 Ballots from Incheon's Yeonsu B District from the April 15 general elections being moved to Incheon District Court after it accepted Rep. Min Kyung-wook's petition to preserve them for recounting. [YONHAP]

As Min continues to fight, concerns grew inside the UFP about the repercussions. “I am worried that the public may think the UFP is not accepting the outcomes,” said Rep. Chang Je-won.

NEC chief apologizes, vows to do better on election day

Neutrality is key to election