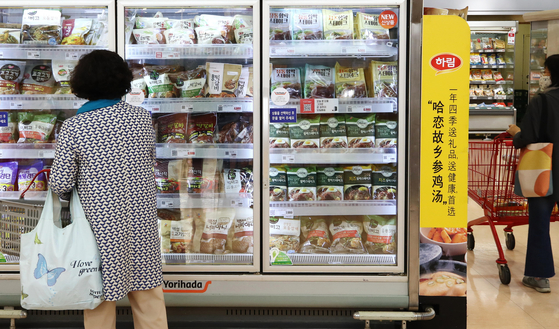 A customer peruses ready-to-eat meals in the refrigerated foods section at a discount store in Seoul. [YONHAP]


While many industries are reeling amid global lockdowns and plunging consumer demand, Korea's food industry is having a banner year.


Food companies are reporting on-year increases in profits during the first quarter, with soaring sales pushing some firms to all-time records.


Consumption patterns shifted markedly during the three-month period as the coronavirus outbreak began its rapid spread. More people opted to stay home in the interest of social distancing, leading to skyrocketing sales for noodles and ready-made meals, often referred to as home meal replacements (HMRs) in Korea.


The company's sales were fueled by rising demand both at home and abroad. Sales for processed foods globally jumped by 126 percent during the January-March period as international consumers rushed to stockpile food to prepare for coronavirus lockdowns, the company said.


“Local sales also increased by 16 percent compared to the same period last year, from the increasing demand for pre-packaged porridge and other soup items from HMR brand Bibigo,” CJ stated in its quarterly earnings report.

According to Hana Financial Investment, the local HMR market is likely to grow close to 4.4 trillion won this year as more people continue to eat fewer meals out.

And the trend to eat in will outlive the pandemic. In a joint survey by Hana Financial Investment and CJ CheilJedang, almost 90 percent out of 4,400 recipients answered they would continue to dine out less often, even after the coronavirus is contained.


Three top ramyeon makers benefited from the coronavirus, due to massive panic buying and growing demand for convenience food.


First came the chapaguri craze that swept across the globe in early February, popularized by the success of Korean film "Parasite," which featured the noodle dish and went on to take top honors at the Academy Awards. And then came the mass hoarding of ramyeon from customers abroad.


For Nongshim, the company that makes the two noodle products required to make chapaguri, net profit increased by 67.7 percent on year, reaching 48.9 billion won. The sales at its international branches increased by 25.9 percent, reaching nearly 1.7 trillion won in the first quarter.


Samyang Foods, the No. 3 ramyeon maker, experienced record sales figures in the first quarter, lead mostly by a 20 percent sales jump for its flagship Samyang Ramen and its Extremely Spicy Chicken Flavor Ramen, more widely known as Buldak Ramyeon for YouTubers that dare to taste this famously spicy product


The company’s net profit increased by 82.1 percent, reaching 22.7 billion won for the first quarter. Its revenue increased by 29 percent.


Ottogi, the second-largest ramyeon maker in Korea, failed to achieve the massive sales that its competitors enjoyed. The company is the manufacturer of the best-selling Jin Ramen.


Its net profit for the first quarter increased by only 2 percent, reaching 31.2 billion won. Quarterly revenue was 575.3 billion won, up 6.3 percent on year.


Its instant noodles and home meal replacements did well, but around 60 percent of Ottogi’s sales come from business clients and restaurants, who purchase the company’s sauce and condiments. Restaurants and cafeteria operators have struggled as people refrain from eating out and schools replaced in-person classes with online sessions.


While some analysts dismiss the unexpected sales bump as a short-term effect of the pandemic, others say otherwise.


“Demand for ramyeon has remained strong in April, and the mega shopping season in China that falls in June may help boost sales,” said Park Sang-joon, an analyst at Kiwoom Securities. In the case of [Samyang’s] spicy chicken, ramyeon exports had been strong even before the pandemic, and therefore, we expect the market’s growth potential to continue on for longer."