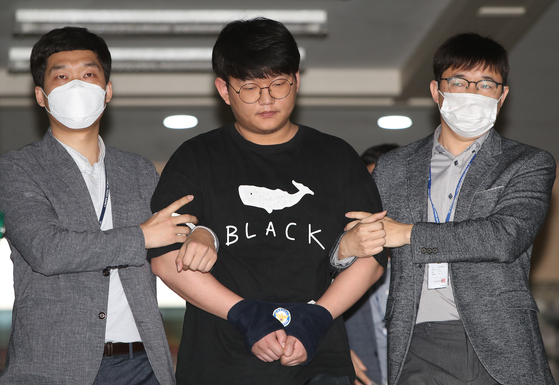 Moon Hyung-wook, the suspected operator of one of the earliest online sex trafficking rings on Telegram, is led out by police for a perp walk in front of the press at the Andong Police Precinct on Monday. [YONHAP]


Moon Hyung-wook, the 24-year-old alleged mastermind behind one of the earliest online sex trafficking rings on Telegram, said his actions were motivated by the “wrong sexual ideas” as he took a perp walk on Monday.

The suspect, better known by his online alias “God God,” delivered a brief apology to his victims in front of the press as he was led out — face uncovered — of a police precinct in Andong, North Gyeongsang, to a prosecutors’ office in the city.

Moon did not clarify why he had allegedly targeted young female students in particular as victims in his online pornography ring.

When asked about the number of times he ordered co-conspirators to film themselves sexually assaulting victims, Moon hesitated before answering that he had made such orders on three occasions.

As to the accusations of his association with Cho Ju-bin, another leading suspect accused of running a similar operation, Moon denied any ties.

The North Gyeongsang Provincial Police Agency said it had so far verified the identities of 21 of Moon’s victims. The suspect testified to police that his actual victim count numbered around 50 — many of whom were minors.

After a monthslong manhunt for “God God,” police arrested Moon — a 24-year-old university student — earlier this month on charges of violating laws to protect children and adolescents from sex crimes.

He admitted to the charges brought against him.

Under the username “God God,” Moon was the first to launch a Telegram pornography chat room that was used as a conduit for the circulation of thousands of pieces of pornographic material, police said. Such chat rooms have come to be known as "Nth rooms.”

Of these thousands of pictures and videos, Moon is believed to have made around 3,000 himself.

At a press conference Thursday, police described some of the methods by which Moon lured victims through social media from September 2018 to January this year.

He primarily targeted young women and minors who had uploaded revealing images of themselves on the internet, approaching them online with the claim that police were investigating them for sharing sexual content.

After gaining their trust, Moon obtained victims’ private information and then used it to blackmail them into providing increasingly more explicit photographs and videos of themselves, police said.

This content was then shared on Telegram chat rooms he ran to paying members.

In some cases, as he admitted publicly on Monday, Moon solicited other co-conspirators to rape or sexually assault victims while filming the process. In December 2018, a 29-year-old man surnamed Lee filmed himself raping a female high school student in a parking lot of a supermarket and at a motel.

The suspect was later caught by police and sentenced to three years in prison, but the video he filmed had already been passed onto Moon, who used it to threaten the victim and her mother.

“We plan to thoroughly uncover [Moon’s] other crimes that have not yet been confirmed, as well as how he collected profits from members,” said a police spokesperson. “We will also continue our probe into those other suspects who distributed, purchased or possessed the sexually exploitative content.”

While the methods he employed to blackmail victims mirrored that of the chat rooms run by Cho, Moon told police he collected his profits in the form of gift certificates as opposed to cryptocurrency.

Moon said he had charged those wanting to enter his chat rooms a fee of 10,000 won and collected a total of 900,000 won in the process. He claimed to police that he later gave that money back to victims in order to silence them.

Police added they apprehended four other suspects in their 20s and 30s who helped Moon exploit victims, three of whom have been placed under pretrial detention.

But police also suspect Moon’s alleged crimes could date further back and involve even more co-conspirators, as he himself testified he began such crimes as early as July 2015.

Police further said Moon could have committed some of these crimes while performing his military service as a social service agent at a child care institute from 2017 to 2019.

North Gyeongsang police revealed that they had apprehended 165 suspects — including Moon and the four possible co-conspirators — in total linked to digital sex crimes.

In a press conference Monday, Police Commissioner General Min Gap-ryong said that while police had caught "God God," there were still mountains of cases that needed to be investigated.

“We will use this opportunity to mount a probe in a large enough scale to wipe clean digital sex crimes,” Min said.