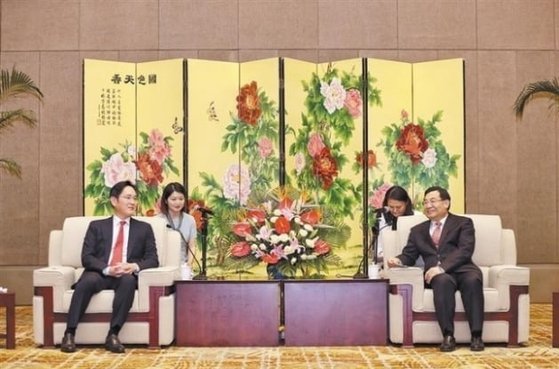 
Samsung Electronics Vice Chairman Lee Jae-yong met government officials in Shaanxi Province during his trip to China to discuss possible cooperation in the chip and biologics industries and the resumption of production following coronavirus-related lockdowns and shutdowns.


Lee held a meeting with Hu Heping, Communist Party secretary of the Chinese province, and Shaanxi Governor Liu Guozhong on Monday, after his visit to the electronics maker’s chip plant in Xi'an, the capital of the province.

The party secretary expressed his intention to support Samsung’s effort to normalize business operation in the region and its project in the memory chip business, according to Shaanxi Daily, while not specifying what sort of support it could provide.

Hu cited flash memory chips, logic chips, batteries and biologics as possible areas for future cooperations. He went on to thank Samsung for offering self-quarantine items during the pandemic.

The vice chairman also expressed his gratitude for the help Samsung received during the pandemic, adding that the company is hoping to contribute more for "the new chapter" in the province through deepened cooperation, according to the Chinese news outlet.

At the Xi’an factory on Monday, he emphasized the importance of swiftness in adjusting to changes.

Lee wrapped up the three-day visit to China on Tuesday.