North continues to deny kidnapping of passengers from 1969 KAL flight

North continues to deny kidnapping of passengers from 1969 KAL flight 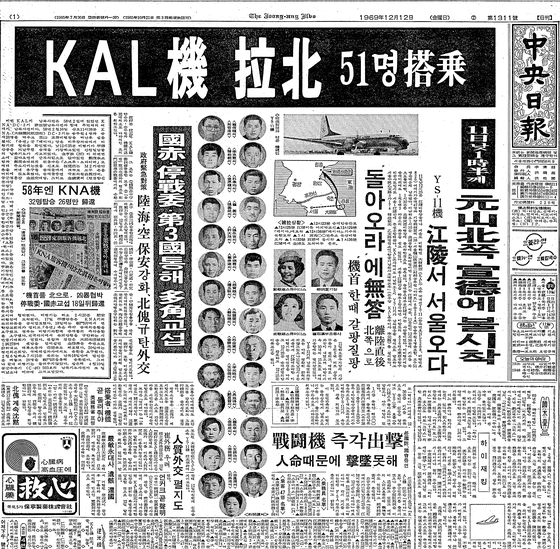 The front page of the JoongAng Ilbo on Dec. 12, 1969, the day after a South Korean plane was hijacked and forced to land in Wonsan, east of the North Korean capital of Pyongyang. [JOONGANG ILBO]


After half a century, North Korea still insists it did not kidnap the South Korean passengers aboard Korean Air Lines flight YS-11 in 1969, according to a letter released by a United Nations human rights agency Monday.

The incident in question refers to the hijacking of Korean Air Lines (KAL) flight YS-11, which was carrying four crew members and 46 passengers, on Dec. 11, 1969. The plane was destined for Gimpo International Airport, but after taking off from Gangneung, Gangwon, a North Korean spy aboard the plane forced the pilots to redirect the plane to land near Wonsan in North Korea that afternoon.

Pyongyang claimed the pilots had voluntarily defected in protest of the military junta that ruled South Korea at the time.

Thirty-nine passengers were repatriated back to the South two months later, but 11 never returned.

The hijacking was one of the many provocations undertaken by the North in the late 1960s, when tensions between the two Koreas were at their highest since the 1950-53 Korean War.

While the incident incited fury among many South Koreans — leading thousands to attend a rally protesting the North in the dead of winter — it too became overshadowed by a sudden détente in relations in 1972, when the two sides signed a joint statement for the first time since partition.

But for decades, human rights groups as well as family members of the abductees continued their struggle to shed light on the incident.

On Feb. 11 this year, the Office of the UN High Commissioner for Human Rights (OHCHR) sent a letter to Pyongyang urging the regime to repatriate the 11 abductees whose current fates are unknown.

Members of the UN Working Group on Enforced or Involuntary Disappearances who penned the letter called on the North Korean regime to “start genuine cooperation to clarify the fate and whereabouts of these 11 individuals as well as all the other disappearance cases.”

The North responded with its own letter from its UN mission in Geneva on Feb. 24, which was released by the OHCHR Monday, rejecting the allegations of the abductions of the crew and passengers of flight YS-11 and calling the claims an “extension of the stereotyped despicable political plots fabricated by the hostile forces aimed at overthrowing the [North Korean] system using human rights as the pretext.”

The letter continued, “If [the OHCHR] really cares about the protection of human rights, they are advised to refrain from carrying cases fabricated by wire-pulling forces, but should rather pay attention to confirming information on the fate and whereabouts of [North Korean] citizens abducted to South Korea including 12 females abducted as a group in China, in April 2016.”

Family members of the 11 South Korean abductees from 1969 say North Korea’s continuous denial does not hold up in the face of immense evidence pointing to a criminal act by Pyongyang.

“The 1969 KAL incident is a historic fact, and even if North Korea denies it or distorts it, the truth is that [the North] did not follow proper principles at the time,” Hwang In-cheol, the son of one of the unreturned abductees, told the Korea JoongAng Daily.

“[Pyongyang’s argument that the YS-11 passengers defected] is just North Korea’s claim, and it is my belief that the North should present facts that family members can accept.”

Hwang, who was 2 years old when his father — a producer for Munhwa Broadcasting Corporation — boarded that fateful flight and never returned, said he will continue his crusade to bring his father home.

“Until now South Korean society — as well the government — has regarded the [1969 KAL] incident with apathy,” he said. “We are campaigning to raise awareness of the case so that it can be solved on a humanitarian basis through the efforts of the international community.”