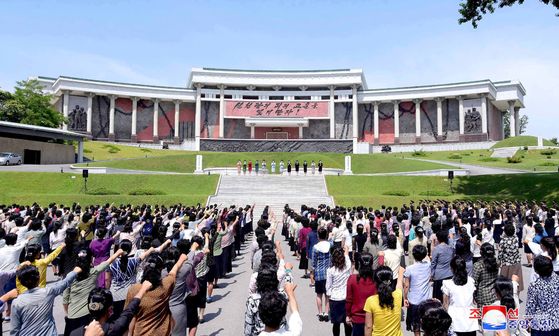 Members of the North’s Socialist Women's Union of Korea on Tuesday partake in a rally denouncing South Korean activists' dispatch of propaganda leaflets across the border into the North. [YONHAP]


North Korea’s Foreign Ministry on Thursday slammed the United States for “interfering” in inter-Korean relations after the U.S. State Department expressed disappointment with Pyongyang’s decision to sever relations with the South and regard it as an “enemy.”

Kwon Jong-gun, director general of the Department of U.S. Affairs at the North’s Foreign Ministry, called the U.S. response “ridiculous” and “disgusting,” while accusing Washington of double-dealing and meddling in inter-Korean affairs, according to an English-language statement carried by the North’s official mouthpiece, the Korean Central News Agency (KCNA).

“If the U.S. pokes its nose into others' affairs with careless remarks, far from minding its internal affairs, at a time when its political situation is in the worst-ever confusion, it may encounter an unpleasant thing hard to deal with,” the statement read.

“As there are not a few things to be settled between [North Korea] and the U.S., there would be no need for the U.S. to face disaster for others while playing the protector of south Korea.”

In a direct reference to the upcoming presidential election in the United States, in which President Donald Trump will stand for re-election, Kwon further warned the United States to “hold its tongue,” lest it is forced to experience a “horrible thing.”

The statement, which followed a series of livid commentaries from the regime toward Seoul, testified to what Kwon called Pyongyang’s “extreme dismay and resentment” at South Korea and the United States for their refusal to relieve economic sanctions on the North amid stalled denuclearization negotiations.

North Korea announced it was cutting all communications lines with the South Korean government on Tuesday, citing Seoul’s failure to follow through with an inter-Korean agreement signed at their first summit at Panmunjom in April 2018.

Throughout the week, propaganda outlets in the North let loose a storm of criticism of Seoul, denouncing defectors and the South Korean government over the leaflet issue.

In a Korean-language editorial published Thursday, the regime’s official party newspaper, the Rodong Sinmun, said Pyongyang would unleash “remorseless punishment” on the North Korean defectors responsible for dispatching the leaflets, while calling the South Korean government “cowardly” and “devoid of the most basic morals” for turning a blind eye to the leaflets.

“This situation represents a determined attempt [by the South] to derail inter-Korean relations and challenge us in a way tantamount to a declaration of war,” the editorial said.

The Arirang Meari, another regime mouthpiece, directly attacked South Korean President Moon Jae-in in a report Thursday without mentioning him by name, quoting a North Korean official who said Moon was worse than his predecessors in the way he has betrayed inter-Korean hopes.

South Korean authorities “will experience the most painful and nightmare-like time,” Han Song-il, the director of a research institute under the North’s United Front Department, told Meari.

The activities that have so incensed the regime were orchestrated by two civic groups run by defectors in the South, Fighters for a Free North Korea and Keun Saem, which dispatched balloons containing thousands of propaganda leaflets, books, memory sticks and $1 bills across the border into the North on May 31.

On Monday, they tried to send rice in water bottles to the North by floating them up the coast from Ganghwa County in Incheon but were stopped by local residents who protested that the act could incite the North to retaliate militarily at the border.

In a controversial decision that immediately generated intense backlash from South Korea’s conservative opposition, Seoul’s Ministry of Unification on Wednesday said it would press charges against the two groups for violating the Inter-Korean Exchange and Cooperation Act.

The ministry further said that it will take steps to revoke government-issued permits for the two civic organizations because they endangered the lives and safety of people living at the inter-Korean border and “infringed upon the public interest.”

The ministry cited Article 13 of the Inter-Korean Exchange and Cooperation Act, which states that any person who intends to "take out goods" is required to obtain approval from the unification minister.

On Thursday, the ministry said it had filed criminal complaints with the Seoul Metropolitan Police Agency against the two groups and that it informed them of plans to open hearings to revoke their government-issued permits to operate as civic organizations. 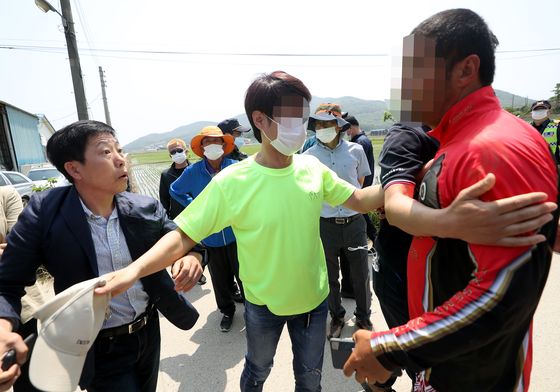 Park Sang-hak, a North Korean defector who heads the civic group Fighters for a Free North Korea, left, clashes with local residents of Ganghwa County, Incheon, after the residents stopped the organization from floating plastic bottles containing leaflets and propaganda across the coast into North Korea. [YONHAP]


Ministry officials told reporters the government filed additional criminal complaints against the groups for violating the Maritime Waste Control Act by floating the plastic bottles — most of which ended up as trash on South Korean shores — and the Aviation Safety Act for using unauthorized drones to carry leaflets over the border.

South Korea’s presidential office, the Blue House, released its first official statement on the leaflet ban on Thursday, expressing “deep regret” with the unauthorized acts by the civic groups which it said “do not help efforts to build peace.

“The government will strictly control the distribution of leaflets and objects to the North in the future, and will respond firmly to violations,” the statement said.

“Our government will continue to abide by all inter-Korean agreements to maintain peace and prevent accidental military clashes on the Korean Peninsula.”

The two civic groups and South Korea’s conservative United Future Party protested the move, accusing the government for giving in to the North’s saber-rattling.

Though some among its own ranks expressed disagreement with the Unification Ministry’s decision, the ruling Democratic Party (DP) on Wednesday said it would remain in lockstep with the administration in expediting legislation to support Moon’s inter-Korean policies.

Rep. Song Gab-seok, the DP’s spokesman on the floor, said following a meeting at the National Assembly Wednesday the party was likely to push through ratification of the April 18 Panmunjom agreement with its supermajority in the near future.

It is questionable, however, whether such steps will be sufficient to mollify Pyongyang and restore inter-Korean contact given the regime’s intense expressions of displeasure over the past week.

With tensions mounting on the Korean Peninsula, Secretary General of the United Nations António Guterres expressed regret for the North’s decision to cut off communications with the South, noting “such channels are necessary to avoid misunderstandings or miscalculation.”

Noting June 12 and June 15 as the anniversaries of the first summits between the leaders of the United States and North Korea, as well between the two Koreas, United Nations Spokesperson Stéphane Dujarric said Guterres hoped the parties will use the occasions “to redouble efforts to resume talks to achieve sustainable peace and the complete and verifiable denuclearization of the Korean Peninsula.”