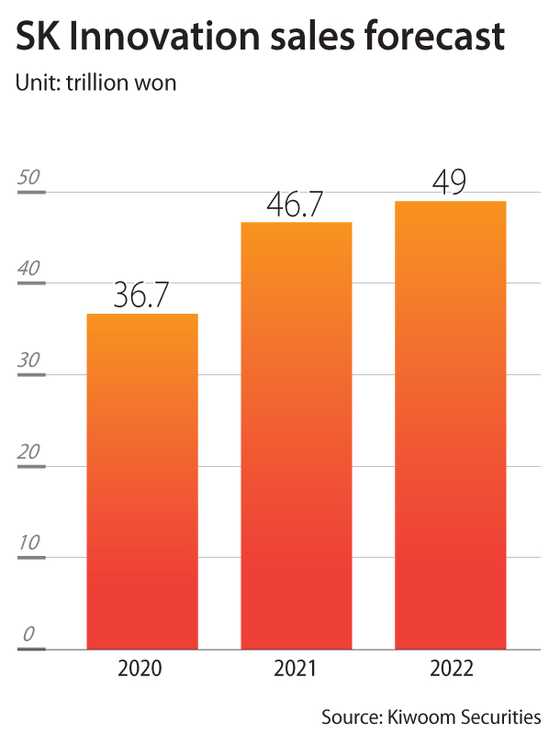 SK Innovation is expected to see substantial improvement in sales performance in 2021 and 2022 due to its aggressive investments in oil refining and battery business.

The report notes that the company decided to invest 890 billion won to build a second electric vehicle (EV) battery plant last month which could be a reason behind the improvements in sales. This EV battery plant, with a capacity of 11.7-gigawatt hours, will start operating in 2023 and is expected to increase the company’s total battery production to 71-gigawatt hours.

SK Innovation’s many contracts for supplying batteries to global car manufacturers, such as Volkswagen, Ford and Hyundai motors, is also considered as a factor for improvements. Through this, the company was able to expand its business globally, leading to an increase in the amount of order backlog from 320-gigawatt hours in 2018 to 500-gigawatt hours in 2019.

The market share of SK Innovation is also swiftly increasing which could be considered a sign for improvements. According to SNE Research, a market research company in Korea, SK Innovation, with 4.5 percent of the market share, ranked seventh in terms of the global electric car battery sector in the first quarter this year. The company is on the verge of entering the Top 5 considering the battery plants in China and Hungary is expected to soon begin operations.

In addition, SK Innovation invested 1 trillion won in vacuum residue desulfurization which enabled the company to produce 2000 barrels of liquefied petroleum gas (LPG) and naphtha, 6000 barrels of diesel and 34,000 barrels of low sulfur fuel oil per day. This played a significant role in improving the overall financial status of the company by creating an additional 200 to 300 billion won of earnings before tax, depreciation and amortization annually.

External factors are also considered as factors behind the bright outlook of this Korean petroleum refining company. Many countries are easing their lockdown regulations due to the decrease in cases of the coronavirus which will eventually increase the demand for the oil in the near future leading to an increase in sales.

For Korea's oil refiners, Q2 was a golden period