KDI's base case for 2020: Barely any economic growth

KDI's base case for 2020: Barely any economic growth 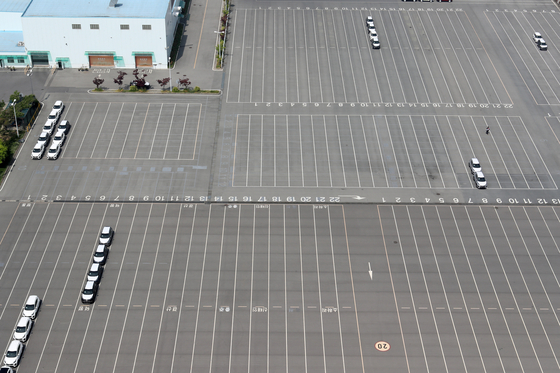 An empty parking lot at a Kia Motors plant in Gwangju on May 11 after the automaker had to partially suspend productions as export orders fell due to the coronavirus. [YONHAP]


The economy will barely grow this year, the Korea Development Institute (KDI) said, adjusting its forecast for 2020 to 0.2 percent from 2.3 percent. The state-owned think tank cited the sharp drop in consumer spending and exports.

It is forecasting 3.9 percent growth in 2021, as the economy will begin to recover in the second half of this year.

If the KDI's forecast turns out to be accurate, it would be the slowest growth in two decades. The only time the Korean economy grew slower than 0.2 percent was when it contracted 5.1 percent due to the economic crisis of 1998. The last year in which the economy grew less than 1 percent was in 2009, when GDP rose 0.8 percent.

The KDI projects a 0.2 percent year-on-year decline in the first half of this year and a half a percent growth in the second half.

The research institute said the easing of social distancing will contribute to more economic activity. Investments that have been on hold will return, the KDI projected.

Spending in the private sector is expected to decline 2 percent, with a 4 percent drop in the first half. This is expected to ease in the second half, only falling 0.1 percent year-on-year.

It projects spending to expand 5.3 percent next year.

The KDI’s projection is still considered optimistic, as major economic institutions have a much gloomier outlook, with many projecting negative growth this year.

The Korean economy in the first quarter of this year grew 1.3 percent year-on-year. However, this was the slowest growth in more than a decade, the last being the third quarter of 2009 when the economy grew 0.9 percent. When compared to the previous quarter, it contracted 1.4 percent, the first since the fourth quarter of 2008.

The larger concern is the second quarter, with major economies including the United States having been on strict lockdown. The U.S. Congressional Budget Office (CBO) on Tuesday released a forecast projecting the U.S. economy in the second quarter nosediving 38 percent year-on-year while contracting 11 percent compared to the previous quarter.

The CBO stated that the “pandemic and social distancing have widely disrupted economic activity,” adding they are “causing a wave of job losses and ending the longest expansion since World War II.”

The World Trade Organization projects global trade to contract between 13 and 32 percent this year due to the coronavirus. Korea’s trade accounts for 64 percent of the country’s GDP.

The state-owned think tank said the Korean economy this year could grow 1.1 percent in the best scenario where a vaccine or a treatment against the contagious disease is developed. It said this could quickly boost not only Korea’s own economy but also the global economy.

However, it also laid out the worst case of a 1.6 percent contraction.

The KDI projected that if the domestic economy and exports continue to struggle due to the virus until the end of this year, company and household bankruptcies will rise, which would lead to massive layoffs.

“As the uncertainties are high, there are equal possibilities of a reverse growth,” said Jung Kyu-chul, head of the economic forecast department at the KDI. “If companies and households go bankrupt and unemployment emerges, the recovery could progress slowly even after Covid-19.”

The KDI's Jung said as uncertainties are high, there’s a need to increase fiscal spending especially on welfare policies.

“As there’s a demand for expanding fiscal spending in the mid to long term, increasing taxes would be necessary,” Jung said. “While it would be difficult to proceed immediately, [I] think we are at a point of starting to discuss [the issue.]”