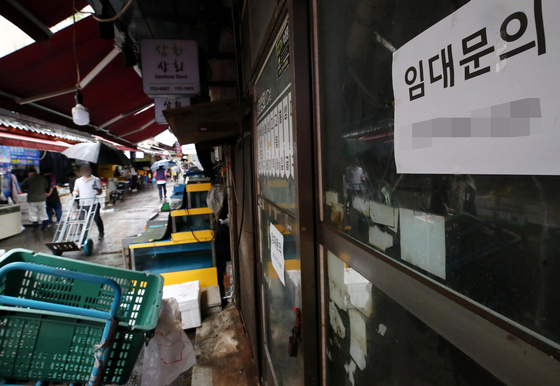 A store in Namdaemun Market, central Seoul, with a notice saying it is vacant. As the coronavirus crisis hurts small businesses. the KDI on Tuesday lowered its economic growth forecast for 2020. [YONHAP]

The state-owned think tank on Tuesday forecast the economy this year to shrink 1.1 percent. In May, the institute projected 0.2 percent growth.

Recently the number of daily confirmed Covid-19 cases has eased to around 100, a drop from above 400 recently.

However, with the government extending stricter social distancing regulations for a second week, consumer spending is expected to be affected significantly.

In its latest projection, the KDI estimates the economy will contract 1.4 percent in the second half of 2020, a stark contrast to the 0.5 percent growth projected in May.


The KDI projected consumer spending will shrink 4.6 percent year-on-year in 2020 annual. That’s double the 2 percent drop forecast in May.

In May, the KDI projected consumer spending in the first half of 2020 would contract 4 percent, and in the second half improve to a fall of only 0.1 percent year-on-year as the crisis improves.

In its latest report, it says consumer spending in the first half of this year dropped 4.4 percent. Spending in the second half is expected to decline 4.8 percent.

The KDI noted that thanks to emergency relief grants given to every Korean household between May and June, as well as other government policies including a cut in the consumption tax on new car purchases, consumer spending went up.

However, after these government support measures, spending began declining in July.

It projected that consumer spending in the immediate future will unlikely improve.

Consumer spending could be hurt by household incomes shrinking due to strict social distancing measures and their effects on businesses.

While the number of people employed shrunk 60,000 in the first half compared to a year earlier, that number is expected to surge to 250,000 in the second half.

The report predicted that exports will fall 4.2 percent in 2020, compared to a projection in May of a 3.4 percent decline.

The KDI noted that exports in the first half were lower than its initial projection.

In May, the KDI projected exports would decline 3.5 percent in the first half of this year. It turned out exports shrunk at a faster rate of 4.4 percent.

One contributing factor was tensions between the United States and China.

While the think tank noted that the situation could change after the U.S. presidential election in November, tensions between the two biggest economies in the world could continue.

The KDI raised concerns over the recent easing of social distancing in major countries including the United States and Europe, which could affect Korea's exports negatively. Unlike in April and May, when countries like Italy implemented full lockdowns, recent easings of measures could result in waves of infections. Some countries could be forced to implement stricter quarantine measures, the KDI noted.


The projection for imports in 2020 was changed from a 3.8 percent decline in May to a 4.2 percent drop.

The increase in facilities investment was largely due to greater demand for semiconductors than previously expected in the first half. Additionally, thanks to government policies such as the lowered individual consumption taxes on new car purchases, automakers’ investments have increased as well.

While the KDI expects the economy to recover next year, its growth projection has been lowered.

The KDI projects the economy to grow 3.5 percent in 2021, slower than the 3.9 percent growth projected in May.

“Not only has economic growth been lowered but also the possibility of an economic recovery has been pushed back due to the recent rapid resurgence of Covid-19,” said Cho Duk-sang, a KDI associate fellow researcher.

The KDI is just the latest institution to revise its growth outlook for the Korean economy.

Earlier, the Bank of Korea changed its outlook for this year from a 0.2 percent drop to a 1.3 percent decline.