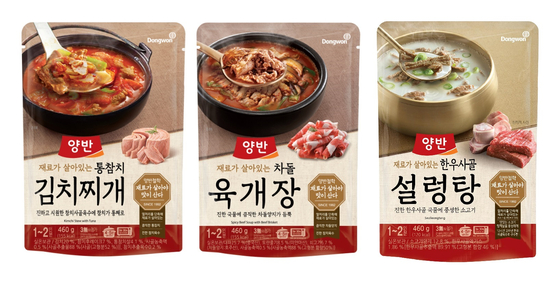 The 14 new soups and stews are being sold under its premium hansik (Korean food) brand, Yangban.

In the past, Dongwon F&B's HMR products were largely porridge and instant rice. It sold soup and stew HMRs, but they were made by another company.

The new releases are manufactured at a factory in the southwestern city of Gwangju. Forty billion won ($32.57 million) was invested to install the facilities to manufacture soups and stews, according to the company.

The products are heated 20 percent less than competing soup or stew HMRs, according to Dongwon F&B. Less heat processing translates into better maintenance of food textures, the company says.

The company’s goal is 50 billion won in sales for soup and stew HMRs this year, and 100 billion won annually by 2022.

"The soup and stew HMR market is very big for a single category and has shown continuous growth over the past several years,” said Kim Il-kyu, a spokesperson for Dongwon F&B. “People who want to buy all the ingredients needed to make a soup or stew are decreasing with the increase of single-person households. The growing 'untact' culture is also expected to boost the growth of the HMR market.” Untact culture refers to social distancing norms in the coronavirus era.

The market for soup and stew HMRs was 199.86 billion won last year, up 20.83 percent compared to 165.4 billion won in 2018, according to Nielsen Korea. The market was led by CJ CheilJedang with more than a 50 percent share, followed by Ottogi and Daesang.