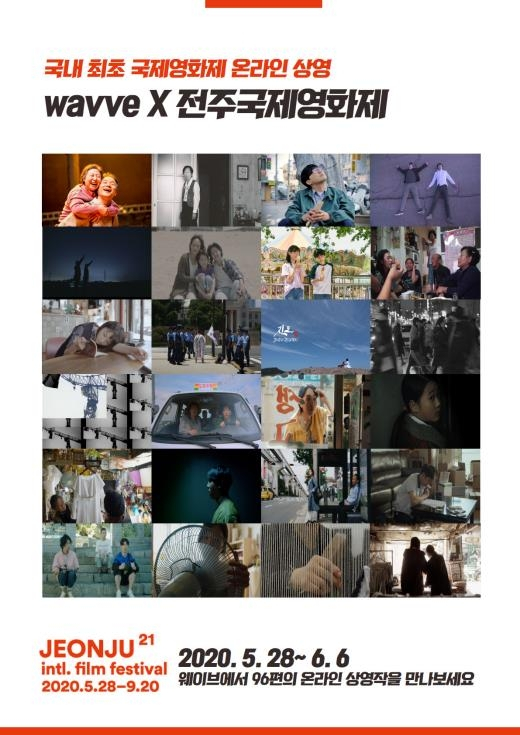 Some of the local and international films invited to this year's Jeonju International Film Festival (JIFF) will be made available through local online streaming platform Wavve during the festival period. [JIFF]


Local over-the-top media service Wavve will collaborate with this year’s Jeonju International Film Festival (JIFF) to stream 96 local and international films during the festival period between May 28 and June 6.


JIFF is the first domestic international film event to host an online edition amid the coronavirus pandemic. Fifty-four local films and 42 foreign films have given their consent to allow the public to enjoy the films via the streaming platform.

In the Korean Film Competition, nine out of 11 total films will be available on the platform, including “Gull,” “Blessedness: Monsters and Specters,” “Please Don’t Save Me,” “Take Me Home,” “Mom’s Song,” “33 Daldongne 33 Up,” “Midsummer Madness,” “Dispatch; I Don’t Fire Myself” and “Homeless.”

In International Film Competition, two out of eight films — director Alex Piperno’s “Window Boy Would also Like to Have a Submarine” and director Clarisa Navas’s “One in a Thousand ”— will be screened online.

Nineteen films from World Cinema selection, three from Cinema Fest selection, 11 from Expanded Cinema and one from Jeonju Cinema Project 2019 are expected to be available through the streaming platform.

“We have implemented strong security policies based on multi-DRM,” Wavve explained in an official statement. “In case a copyright violation occurs, we have technologies to track down the device and user logs. We will legally respond to any attempts to abuse copyright laws.”

The online streaming of these selections can only be accessed in Korea during the festival period. The viewers can visit Wavve’s website and sign up for a membership online. JIFF's official website will direct visitors to a list of titles that will be available for streaming.