Seoul tries to downplay sanctions from 2010

Seoul tries to downplay sanctions from 2010 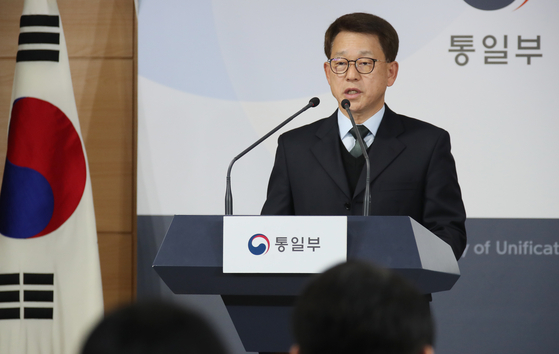 
The U.S. State Department expressed its support for inter-Korean cooperation in response to South Korea’s announcement Wednesday that its decade-old independent sanctions on the North had effectively expired.

But it may be a stretch to assume the statement from Washington — which didn’t depart from its usual comments on the Korean Peninsula — represents a backing of Seoul pursuing economic exchanges with Pyongyang, as hinted by South Korea’s top inter-Korean agency on Wednesday.

In a regular press briefing, Ministry of Unification spokesman Yoh Sang-key said South Korea’s independent sanctions on the North — which Seoul put in place on May 24, 2010, following the sinking of its Cheonan warship by a North Korean torpedo — had “lost most of their effectiveness."

“The government no longer believes the May 24 measures serve as an impediment toward pursuing inter-Korean exchange projects,” Yoh said. “In the future the government will continue its efforts to expand the space of inter-Korean relations and build a real peace on the Korean Peninsula.”

After condemning Pyongyang for the Cheonan’s sinking, the conservative Lee Myung-bak administration in 2010 banned all inter-Korean trade outside the Kaesong Industrial Complex, the harboring of North Korean vessels at South Korean ports, all visits by South Korean citizens to the North outside of the Kaesong Industrial Complex and the Mount Kumgang tourist region and any new investments in North Korea.

Any aid projects to the North save for those with a strictly humanitarian purpose were indefinitely postponed.

The measures effectively marked the end of South Korea’s so-called "Sunshine Policy” of conciliation with the North, highlighting a sea change to Seoul’s approach to peninsular relations with the conservatives’ rise to power.

Ties between the two Koreas soured further under the Park Geun-hye administration, which, following a series of nuclear tests by Pyongyang in 2016, decided to shut down all South Korean factories at the Kaesong Industrial Complex, the linchpin of the ties between the two countries.

Inter-Korean relations never fully recovered, even after the liberals returned to power in 2017 with Moon Jae-in’s election to the presidency.

Moon met North Korean leader Kim Jong-un three times since then, engendering hopes of renewed cooperation between the two Koreas, but the summits failed to lead to practical results because of strong opposition from the United States on easing sanctions before the North’s denuclearization.

Seoul tried persistently to persuade Washington last year to approve its exchanges with the North, particularly in regard to resuming the Kaesong Industrial Complex and Mount Kumgang tours, but the attempts only resulted in friction between the allies.

North Korea made its disappointment clear by refusing talks with the South, frustrating the Moon administration’s attempts to build a lasting peace regime on the peninsula.

Buoyed by a landslide victory for the ruling Democratic Party in last month’s general elections, Moon may be aiming to revive his North Korea policy by questioning the pertinence of measures put in place by his conservative predecessors.

At the World Health Assembly on Monday, Pyongyang again called for the lifting of international sanctions on its economy amid the coronavirus pandemic. In response, the U.S. State Department stressed it will “not allow those who endanger the national security of the United States to exploit the Covid-19 emergency to achieve long-standing goals of sanctions relief.”

Moon also faces an uphill challenge domestically in persuading the South Korean people of the necessity of resuming inter-Korean cooperation when public memories of the North Korean attack on the Cheonan remain fresh.

One government official in Seoul appeared cautious about the meaning of the Unification Ministry’s statement on Wednesday. “Spokesman Yoh merely described the situation as it stands currently,” the official said. “It does not mean the dismantling of the May 24 measures.”