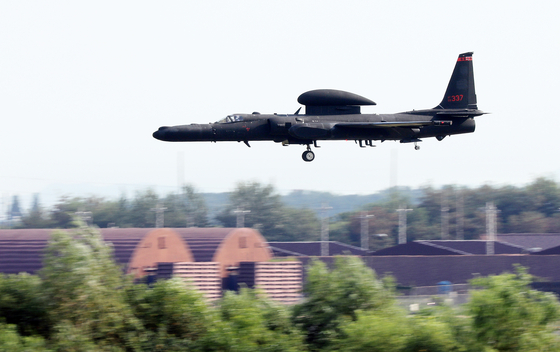 A Lockheed Martin U-2S high-altitude reconnaissance aircraft flies over Osan Air Base in Pyeongtaek, Gyeonggi, Tuesday after Seoul and Washington kicked off their four-day crisis management staff training as a prelude to their summertime military exercise next week. [NEWS1]


The Joe Biden administration, while saying it is open to dialogue, is drawing its line in terms of its approach to North Korea in regard to making any concessions or compromising on the Seoul-Washington military drills.

North Korea has ramped up its criticism of the annual summertime joint military exercise over Tuesday and Wednesday, even warning of a "serious security crisis.”

In response, the U.S. State Department repeated its position Wednesday that the joint drills “are purely defensive in nature.”

U.S. State Department spokesman Ned Price said in a briefing, “We have long maintained the United States harbors no hostile intent towards the DPRK,” referring to the acronym for the North's full name, the Democratic People's Republic of Korea.

South Korea and the United States kicked off Tuesday a four-day crisis management staff training as a prelude to their annual summertime joint exercise scheduled from Aug. 16 to 26.

In turn, Kim Yo-jong, the North Korean leader's sister, said in a statement Tuesday that the Seoul-Washington military drills "are the most vivid expression of the U.S. hostile policy towards the DPRK."

On Wednesday, Kim Yong-chol, director of the North's United Front Department, in charge of inter-Korean affairs, said in another statement that Seoul and Washington will “realize by the minute what a dangerous choice they made and what a serious security crisis they will face because of their wrong choice.”

In a statement to Voice of America (VOA) Thursday, a U.S. Defense Department spokesperson also stressed the U.S. will maintain a strong defense posture to protect South Korea from any threat.

Similarly, John Kirby, the Pentagon spokesman, in a briefing Tuesday told reporters, “Nothing's changed about our need for readiness on the Korean Peninsula and our desire to work in lock step with our ROK allies on training regimen that improves that readiness and keeps that readiness strong.”

He had been asked about a group of 74 South Korean lawmakers calling for a postponement to the joint drill last week and if there are differences between Seoul and Washington in terms of their military perspective.

Kirby replied that Washington makes such decisions “in lock step with our ROK allies, and that's not going to change.”

On the lawmakers’ joint statement, he added, “that's for the South Korean legislators to speak to.”

The Biden administration after completing its comprehensive review of North Korea policy in April said it will take a "practical and calibrated" approach to Pyongyang and has offered dialogue anytime, anywhere, “without any preconditions.” However, it is also making clear that it will not be making any concessions, and has adhered to its principles enforcing strict sanctions and not offering any incentives just for the sake of talks with Pyongyang.

“Our sanctions programs are designed to constrain the ability of bad actors to take advantage of our financial system or threaten the United States, our allies, and partners and civilians,” U.S. Ambassador to the United Nations Linda Thomas-Greenfield told reporters in a briefing Wednesday. “And we know that the North Korean regime is responsible for exploiting its citizens and diverting resources from its own people to bolster its nuclear and ballistic weapons program.”

Thomas-Greenfield, who was on a trip to Thailand after a visit to Japan for the closing ceremony of the Tokyo Olympics, did, however, stress that such sanctions do not affect the United States' readiness to offer humanitarian support for the North.

“We’re deeply concerned about the dire humanitarian situation in North Korea, particularly since the regime closed its borders,” said Thomas-Greenfield. “North Korea has implemented an extremely stringent Covid-19 response, including by closing its borders to international flights and shipments.”

North Korea has admitted it is suffering from an intense food shortage amid flooding from heavy rainfall, droughts, heat waves and strict border controls since January 2020 in response to the coronavirus pandemic.

Thomas-Greenfield said that the U.S. sanctions regime does “not target humanitarian-related trade, assistance or activity.”

The Food and Agriculture Organization (FAO) and World Food Programme (WFP) in its recent report on the outlook from August to November 2021 found that North Korea is expected to face a food shortage of around 860,000 tons this year, equivalent to approximately 2.3 months of food use. 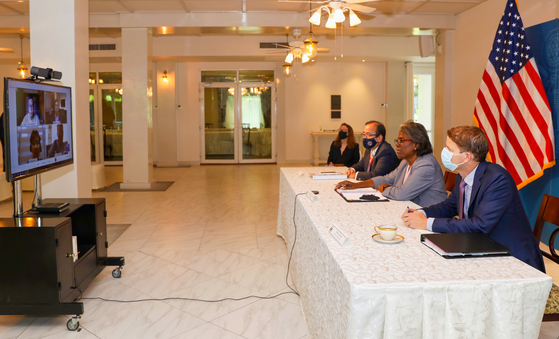 U.S. Ambassador to the UN Linda Thomas-Greenfield, second from right, is pictured in a photo shared on her Twitter account during a meeting to discuss U.S. support for humanitarian support in the region while on a visit to Thailand. [TWITTER]

Inter-Korean communication lines were restored on July 27 after Pyongyang unilaterally severed them 18 months ago. Some analysts pointed out that this could have been in part because of the North’s food shortage problem.

North Korea was unresponsive to calls over revived cross-border communication lines for a third consecutive day as of Thursday, Seoul officials said.

The North Korean side failed to respond to calls over military and joint liaison office hotlines since Tuesday afternoon, after Seoul and Washington began their preliminary training that day.

North Korean Ambassador to Russia Sin Hong-chol in turn said Wednesday that Pyongyang intends to ramp up cooperation with Moscow to counteract the United States.

Sin told Russia’s state-run Tass news agency that this was to “counter the U.S., a common threat, and continuously strengthen and develop at a higher level the strategic and traditional relations between our two countries.”