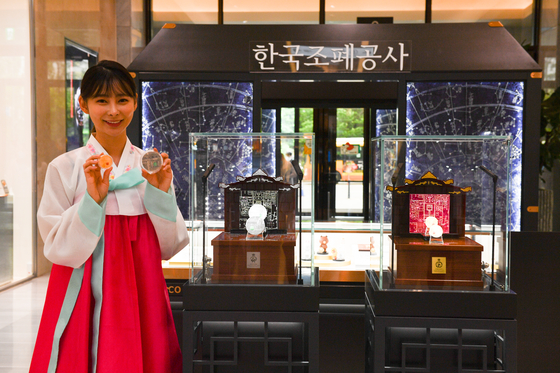 Medallions made with designs inspired by Gyeongbok Palace are on display at Hyundai Department Store’s Pangyo branch in Gyeonggi. A portion of the proceeds will be donated to help state-run agencies to acquire and preserve Korean heritage found overseas. [Komsco]


Korea’s Gyeongbok Palace is featured on the first of a series of limited-release medallions which are being sold to help support the country's mission to locate, preserve and acquire Korean heritage found overseas.

The Korea Minting, Security Printing & ID Card Operating Corporation (Komsco) on Friday released the first edition of its “Royal Series,” a collection of commemorative medallions whose designs are inspired by Korea's cultural and scientific heritage.

The first medallion features a design based on the historic Gyeongbok Palace, the oldest major palace in Seoul and the former royal residence of the Joseon Dynasty (1392-1910). Two versions are available: a gold medallion inlaid with coral, and a silver medallion inlaid with jade. Both coral and jade were jewels used by the dynasty's kings and queens.

The medallions are sold in wooden boxes decorated with mother of pearl.

The minting corporation will donate a portion of the sales profits to the Cultural Heritage Administration of Korea and the Overseas Korean Cultural Heritage Foundation, to help Korea find and acquire items of cultural and historic significance that have been taken overseas.

“By recreating major pieces of Korean heritage, we will continue to be a state-run company that tries to preserve what’s handed down from history,” said Komsco CEO Cho Yong-man.

Both are currently on display at Hyundai Department Store’s Pangyo branch in Gyeonggi through May 31. The gold version, of which 300 have been minted, costs 3.3 million won ($2,660).

The medallions are available online from both the department store’s and Komsco's online stores through June 5. They can also be purchased at the Pangyo branch  through May 31, or at post offices and by visiting NH Nonghyup Bank locations through May 29.

For the release of the first medallions in the series, the minting corporation is also selling heritage-related collectibles including small decorative items and clothes. Those are available for purchase at Hyundai Department Store’s Pangyo branch.

The second release will reproduce a traditional, Korean-style painting portraying the ocean, a crane and a peach, while the third will include an astronomical chart to reflect Korea's scientific heritage.

The fourth medallion will feature a reproduction of another painting, showing the sun and moon behind the king’s seat, along with five mountain peaks.