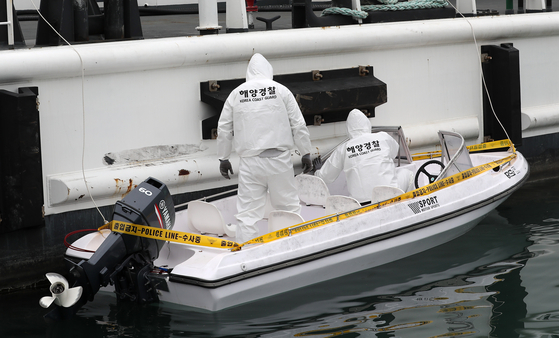 Korea Coast Guard officers on Monday inspect a boat discovered at a beach in Taean, South Chungcheong, on Saturday. [YONHAP]

The small, white boat may have been used by Chinese occupants to illegally enter Korea by sea, according to the Korea Coast Guard. Clothes, bread, a rusty knife, gloves, fishing equipment and life jackets with Chinese lettering were discovered on the boat, along with fuel containers with extra gasoline.

Footage from surveillance cameras about 800 meters (2,600 feet) from the boat showed six unidentified men getting off the vessel on Thursday and walking down a road, two days before the boat was reported to authorities. The men have not yet been located, but the Coast Guard and military believe they headed toward the township of Taean.

The Coast Guard on Monday analyzed the boat, which measures around 4 meters long and 1.5 meters wide. The vessel contains six seats and is powered by a Japanese motor engine with 60 horsepower.

The local fisherman who found the boat on Saturday said he was prompted to report it after he saw people trespassing into local fish farms. Another local resident said it was the first time he was aware of such an incident, and said he was concerned that the Navy and Coast Guard were not aware of the boat until it was reported.

The boat was found about 100 meters from a guard post operated by the Army’s 32 Infantry Division, on property that is off-limits to civilians other than the operators of nearby fish farms.

The Coast Guard has launched a manhunt and asked Interpol to help track down and identify the men.

There is a likelihood that the six sailed to Korea from Shandong Province in eastern China, where similar vessels are commonly found, maritime experts say. This would, however, mean the boat sailed a distance of at least 350 kilometers, a trip that would have taken the passengers nearly 10 hours if they averaged 37 kilometers per hour.

But the difficulty of such a voyage — and the lack of any signaling equipment on the boat — indicates that the men more likely sailed on a larger ship before transferring to the motorboat when they approached Korean waters.

“The boat appears to be Chinese in origin and we are cooperating with the relevant bodies to investigate where it was manufactured and sold,” said a Coast Guard spokesperson. “We are keeping every possibility open.”

The incident recalled a similar case that took place last year near Samcheok Harbor in Gangwon, in which North Korean sailors drifted into South Korean waters on a wooden boat, undetected by maritime surveillance.

As to Saturday’s case, the spokesman for South Korea’s Joint Chiefs of Staff said the likelihood that North Korean espionage is involved in the incident appeared very low.