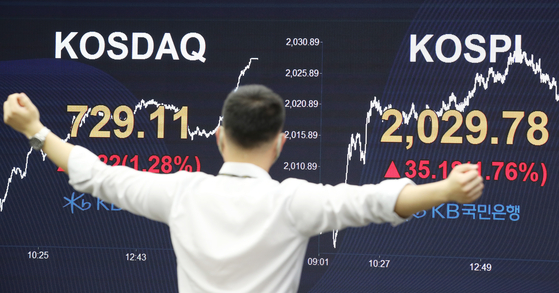 An employee looks at the benchmark Kospi index displayed on the screen attached to the walls of dealing room of KB Kookmin Bank, in the financial district of Yeouido, western Seoul, Tuesday. [YONHAP]

The index got off to a strong start and extended gains throughout the day. Gains were largely buoyed by the rollbacks of the coronavirus-incurred economic lockdowns, particularly in Europe, analysts said. The Euro Stoxx 50 surged 2.27 percent Monday. France's CAC 40 Index closed 2.15 percent higher, while Germany's DAX spiked 2.87 percent.

"The major economies are pushing for economic reopening ahead of the holiday season, especially among the tourist-rich regions in Western Europe," NH Investment & Securities analyst Noh Dong-kil said.

Korea's Composite Consumer Sentiment Index came to 77.6 this month, up 6.8 points from a month ago when the index dropped to the lowest level since December 2008, according to the data from the Bank of Korea.