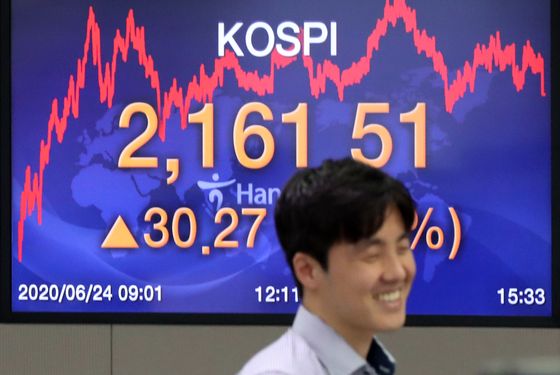 A screen shows closing figures for the Kospi at a trading room in Hana Bank, in Jung District, central Seoul, Wednesday. [YONHAP]

Stocks closed 1.42 percent higher Wednesday on the back of upbeat economic data from the United States and Europe and eased tensions with North Korea, analysts said. The won rose against the dollar.

The index opened higher, tracking an overnight Wall Street rally, and it continued to build gains on the back of a rise in tech and bio shares.

"The Kospi continues to maintain its upturn as various economic data showed improvement, followed by the North Korean risk being relieved," Choi Yoo-june, an analyst at Shinhan Financial Investment, said.

Bio stocks ended higher, with Samsung BioLogics going up 2.12 percent to 819,000 won after the biopharmaceutical affiliate of Samsung Group said it had clinched a 381 billion-won order to manufacture the products for a European firm.

The local currency closed at 1,199.4 won against the dollar, down 9.4 won from the previous session's close.