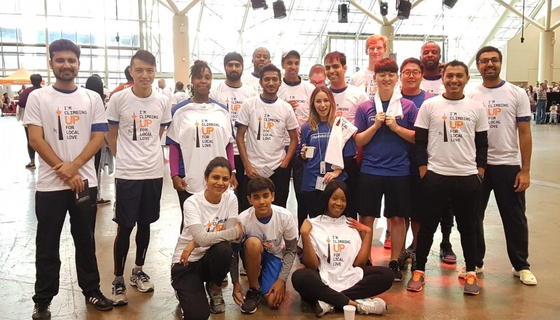 Hyundai Capital Canada employees pose for a photo after participated in the ’CN Tower Climb“ event.

Hyundai Capital United Kingdom is known for its love of football, and its many football clubs have been participating in local football championships. Through this new campaign, the company was able to boost the morale of the employees and encourage the local football league as well.

Hyundai Capital Canada also came up with campaigns to help the local community. For three consecutive years since 2017, employees at the Canadian operation have joined “Big Bike,” a charity running race to raise money for a foundation dedicated to help heart disease patients. The employees have also been joining “CN Tower Climb,” in which participants are required to climb 1,776 steps to the 147th floor of the CN tower, which is one of the highest communication and observation towers in the world.

Hyundai Capital America has been providing classes on basic financial knowledge for youths and adults from low-income households since 2015. This program is an expanded version of a teen education workshop in Irvine, California, that has been taking place since 2013.

Beijing Hyundai Auto Finance, one of the affiliates of Hyundai Capital in China, has been providing financial aid to build various educational institutions in Yunnan, Gansu, Huinan, Guizhou, Guangxi and other provinces in China over the past six years. The company also received a certificate from the Chinese Foreign Ministry for its contribution to an international charity bazaar called “Love without Borders.”

Hyundai Capital posts its CSR campaigns on social media to promote them and garner the attention of the public. Images of tumblers were uploaded on Hyundai Capital’s social media accounts in summer last year as part of a campaign to encourage replacing plastic and paper cups with tumblers to protect the environment. Video footage with the hashtag #ecoHchallenge were uploaded, and employees actively participated in the campaign by leaving comments and uploading photos of their own.