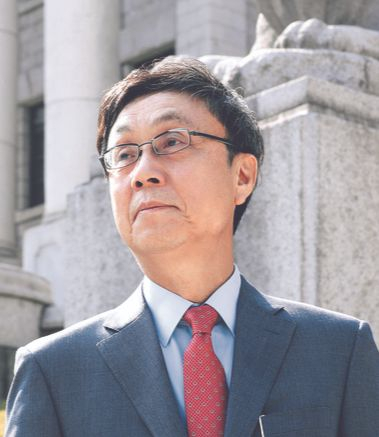 Han Kyun-tae poses for a photo in front of the main building of Kyung Hee University. [SHIN IN-SEOP]


Becoming the president of Kyung Hee University — in the midst of a pandemic that has upended the education industry — isn't the first major challenge Han Kyun-tae has faced.

After securing a job as a reporter with the Korea Economic Daily straight out of college, Han didn't waste time making a name for himself at the paper. During his first six months, he broke three exclusive news stories, a noteworthy feat for a cub reporter in a competitive field.

But two years later he found himself canned, after protesting the media censorship policies in place at the time. It was a major blow during an era in which Korean workers typically stayed with one company for many years.

But he responded by turning his attention to academia and enrolling in universities in the United States, where he learned innovative teaching methods and curricula. He returned to Korea, rising through the ranks of Kyung Hee University to become a professor of journalism and communications, and was ultimately promoted to dean of the department in 2009.

Han, 65, now finds himself at another crossroads. And as university president, he carries the responsibility for an entire institution and its student body on his shoulders.

In a interview published May 16 in the JoongAng Ilbo, Han describes a shifting educational landscape. Beyond the obvious challenge of keeping outbreaks from continuing to occur on campuses, universities face financial uncertainty while educators must find new ways to teach students. Artificial intelligence and remote learning are expected to become a growing part of the conversation.

But regardless of the uncertainty, Han believes it's an opportunity to address the university’s persistent financial and educational weaknesses.

Q. In your Feb. 14 inauguration, you said that you will stay true to your core duties as university president. Tell us more about that.

A. Higher education is undergoing rapid change. At the same time, uncertainty about the future is growing stronger as well.

While contemplating Kyung Hee University’s creative capacity, its history and its traditions, I want to create a university that lives up to its capacity as a university, something that future society will demand.

This is my duty as well as my original resolution.

I assume that you have to prepare for the post-coronavirus era as well.

I would not call it a “post-coronavirus era.” It is an “ongoing-coronavirus era” instead. In the case of the Spanish Flu of 1918, the second spike in infections was more serious than the first. This is not the time to get complacent.

Colleges cannot continue to rely on analog [offline] methods if they want to respond to the outbreak appropriately. Education in general, colleges and their finances must be upended. More than anything, the most urgent change that we require is innovation in teaching methods. We have to develop an environment where both professors and students can learn and develop themselves. We can no longer have 21st century students taught by 20th century professors in 19th century classrooms. The recent pandemic made us realize the seriousness of this issue.

Online learning seems to be getting popular, for reasons other than the coronavirus, and colleges seem intent on using it even after the pandemic is resolved. Why might this be so?

The reason for the sudden spike in interest in online learning is due to the potential earnings from it. If programs like the Minerva School [a highly competitive online university program] continue to get more popular, the future will turn out as Thomas Frey had predicted — more than half of universities in the world will disappear.

After your inauguration, you emphasized the “KHU [Kyung Hee University] Contingency Plan: Overcoming for Transition.” Tell us more about that.

The economics, financial management and disease management scholars have come together to create this plan, for the medium to long term, so that the university can respond suitably to the current crisis.

Out of all the duties of a university president, ensuring stability of the university’s finances is the most essential.

Right now, I am reading the book "Reforming Waseda University" by Seki Shotaro. Waseda University, a private establishment, went bankrupt in 1994. But it took its difficulties to heart and reformed its finances. Now, Waseda can boast some of the most stable finances in Japan as a private university.

Cost-cutting, prudent spending, and diversifying sources for mid- to long-term profits are important. A university has to be run like a business. Reforming our finances is our first priority.

How do you plan on making these changes?

We are going to form a financial body, called Finance21. Its main jobs will be minimizing financial risk, preparing the university for external risks, improving communication through the university and developing its financial system. Using our intellectual assets, we will diversify and cut costs in our business.

A private university must ultimately solidify its financial groundwork through its own efforts. But all of this is conditional on tax incentives for university donations.

The role of the College of Engineering will be important in the future. Any plans for development?


It has been a long-term dream of mine to strengthen the engineering department. In order for a university to remain competitive, it is vital that it develop its science and engineering programs.

Currently, my aim is to get Kyung Hee University into the top 100 international university rankings. It is vital to develop our science and engineering programs to make this happen.

I already asked the dean of the engineering department to start developing specific programs. As of now, renewable energy and climate change are currently the major candidates for development. We are also creating an interdisciplinary major that combines applied sciences, natural sciences and engineering.
Single-subject majors are no longer enough. Universities need to combine subjects together.

A major consideration is the development of AI. Will this affect any of your plans?

AI is capable of efficiently analyzing a vast array of data. But in the end, it is only a tool. Human endeavors must be carried out by humans. Alex Pentland, a Professor of Media Arts and Sciences at MIT said that instead of going the way of AI, we must go the way of EI, that is, “extended intelligence.”
Universities need to center their programs around developing creativity, one that is infused with human sensibilities. This is what an EI program does.

While leaving AI to do what it is good at, students will now be able to focus more on developing creative and interdisciplinary programs. This is the path that universities must take in the future.

KHU's push to analyze and test new students’ core abilities seems to be a fresh idea.

Critical reasoning, analytical reasoning, creativity, communication skills and digital literacy are five examples of the total eight core abilities that we analyze. If the first round of the examinations [given to all students in their first years], reveals a particular weakness in a student, then the university arranges an appropriate program for the student.

Students take their second round of examinations in their second year. The general process is repeated until their fourth year, by which time we can assume that they have [adequately developed] their core abilities.

The companies that are considering hiring a student from Kyung Hee University will be given a certificate [confirming their ability levels] and will base their hiring decisions on it.

Skills matter, not grades. Does Google or Amazon make hiring decisions based on grades? The reason why the Minerva School is so popular is because it emphasizes the development of practical abilities.