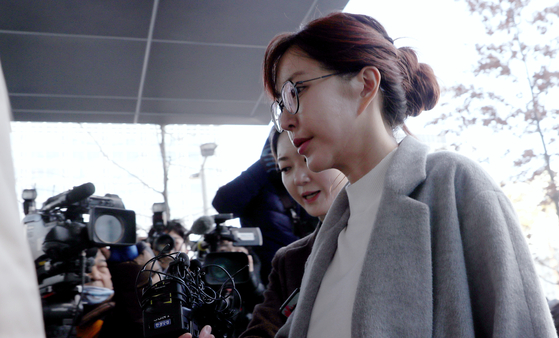 In this picture taken on Feb. 7, 2019, Yoo Soo-young (also known as Shoo of disbanded girl group S.E.S.) walks into the Seoul Eastern District Court to attend the court on her gambling charges. [NEWS1]

Yoo lost the civil court brought against her by Park to repay money that she borrowed to gamble with.

"The defendant must pay the 346 million won and interest [caused by the failure to repay], and also pay for the cost of the lawsuit," the court ruled.

Yoo is said to have met Park at a casino in Las Vegas in 2017, borrowed money then failed to pay it back due to debt she created by gambling. Park filed the suit against Yoo in May last year.

According to Yoo's attorney, Park "demanded 1,800 percent interest rate for the money" and she was not obligated to repay it as it had been borrowed for the illegal purpose of gambling.

Yoo was sentenced to six months in prison, suspended for two years, for gambling 26 times from August 2016 to May 2018 overseas. She was also indicted for fraud but found not guilty.