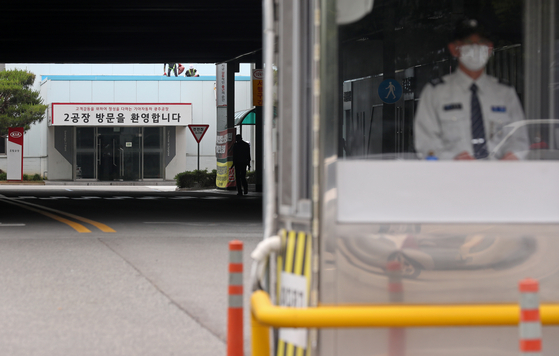 The entry of Kia Motor's plant in Gwangju on May 25. The plant has been shut down since May 25 due to the declining sales overseas. [YONHAP]

A special 500 billion won ($403 million) loan guarantee facility will be established by the government, with some help from the auto manufacturers, to support car parts companies.


The government is also planning a raft of other measures to help jump-start the economy, which is already showing signs of recovery. It will support automotive parts suppliers, small- and medium-sized enterprise (SME) shipbuilders, textile and fashion companies, the exhibition and convention business and sports.

“Recently due to a significant drop in global demand [for cars] including business suspension of overseas dealerships, there has been a major disruption of automaker productions,” Finance Minister Hong Nam-ki said during a government economic emergency meeting on Thursday. “The production disruption of automakers has resulted in a drop of work for parts suppliers, which faces a liquidity crunch.

“This could end up as a risk factor for our automotive industry’s ecosystem.”

Kia Motors on Wednesday announced that it will again suspend two production lines in Gwangmyeong, Gyeonggi, next month due to falling sales overseas as a result of lockdowns overseas.

The country’s No. 2 carmaker suspended productions between late April and early May and also recently which halted production at its plant in Gwangju. Hyundai Motor, the No. 1 automaker, earlier announced of halting three assembly lines at its Ulsan plant early next month.

In April, the Korean automotive industry was hit heavily by the pandemic as exports declined 44 percent in April year-on-year. While domestic sales were up 8 percent, helped by the government’s temporary cut in individual consumption tax, sales of Korean cars in the United States fell 45 percent, while those in Europe nosedived 80 percent.

The government in helping struggling SME shipbuilders has decided to push up the dates on commissioning 30 ships including environmentally friendly ships that will replace outdated ships for public use. Some of the ships that were supposed to be commissioned starting next year will be commissioned this year.

The government also will help extend the maturity of shipbuilder borrowings for production for a maximum one year if their business has been delayed.

It said it will execute 90 percent of this year’s budget in purchasing uniforms for public institutions including police officers and firefighters within the first half to help the struggling textile and fashion industry, whose businesses have been affected due to the decline of clothing sales domestically as well as shutdown of major fashion retailers, including J.C. Penney.

The government will also provide a loan guarantee of 400 billion won for start-ups and venture companies in the textile and fashion industry. While the maximum cap is 50 million won per business, the loan guarantee could be raised to maximum 300 million won if the business keeps its employees on the payroll for a year.

Loans for sports companies including fitness centers as well as sports gear manufacturers and service companies will be increased from current 66.2 billion won to 86.2 billion won. The government will also provide 12.2 billion won for sports facilities that have been affected due to social distancing.

The government introduced plans to further expand the recent recovery of consumer spending triggered by the government’s emergency relief grant of maximum 1 million won per household. Major sales events to help small businesses will be held for two weeks between June 26 through July 12.

“It will be a special discount event of a grand scale that is equal to the Korea Sale Festa,” Hong said. “It will ease the difficulties of SME retailers, SME companies and small businesses that have been directly hit by the coronavirus crisis.”

The Korea Sale Festa, first held in 2015, was created during the Park Geun-hye administration to boost the domestic market, which was affected by the Middle East respiratory syndrome (MERS) outbreak.

“There are many businesses that say their biggest problem is liquidity,” Hong said. “In some parts there are those that are discouraged as they struggle to get loans or extend their loans. We shouldn’t take away the umbrella when it rains.”