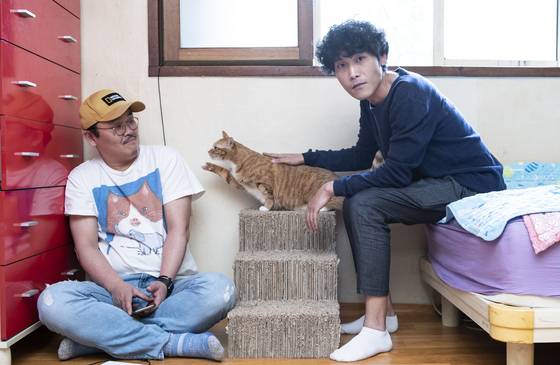 Producer Cho Eun-sung,left, and director Lee Hee-seop of the cat documentary "Our Cats" pose for a photo in Lee's home along with his cat and roommate, Lenny. [KWON HYUK-JAE]


The word butler conjures images of immaculate men in suits and white gloves, ready to wait on their wealthy employers at a moments notice.

“Our Cats," a documentary which premiered in theaters on May 14, focuses on these so-called butlers who dedicate their lives to taking care of street cats. Producer Cho Eun-sung, who also directed and filmed another cat documentary “I am a Cat” (2017), which takes a look at the lives of street cats across Korea, Japan and Taiwan, joined forces with another cat lover, director Lee Hee-seop, to make the documentary.

The JoongAng Ilbo, an affiliate of the Korea JoongAng Daily, met with the two feline fanatics in Lee’s home in Mapo District, western Seoul, and were also joined by Lee's cat, Lenny.

“The central theme of my documentaries has always been coexistence,” producer Cho said in an interview. “We discriminate people based on their color, sexuality, race — even the disabled.

“As I began to film stray cats, which are usually the first things that I see when I go outside, I began to wonder, 'If we couldn’t even coexist harmoniously with these small creatures, how can we live in peace with other human beings?' That was when I decided to start [filming] animals,” Cho said.

“Our society tends to eliminate things that we find uncomfortable. There was even a case a few years ago where all the local street cats were purposely locked in the basement storage of an apartment complex in Apgujeong-dong [in southern Seoul], to be starved to death. I found it horrifying to imagine what kind of world the children who grew up watching such atrocities would build."

Cho met Lee while he was wrapping up filming “I am a Cat” in Japan. Lee happened to be in Japan as well, looking for locations for his debut film “The Goose Goes South” (2018). Lee also had prior experience filming cats in films such as “How to Break Up with My Cat” (2016) and “Cat Day Afternoon” (2018).

With such common ground, the duo scoured local towns far and wide for places where cats and people lived in harmony: from Hyoja Village in Chuncheon, Gangwon, which was then on the brink of being transformed into the country’s first cat village; the redeveloped Seongnam, Gyeonggi; Noryangjin Fish Market in southern Seoul; Cheongsapo village in Busan; and Heyri Art Village in Paju, Gyeonggi. 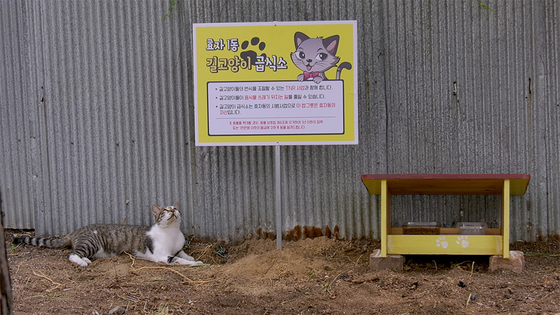 A spot in Hyoja Village where people distribute cat food for the cats in town. [M&CF, INDIESTORY]


The stories of these street cats, the people who care for them and the relationships the duo witnessed, were more than enough to be turned into a film.

Characters include Red, the cat who spends his day gazing into space and tagging along with the owner of a violin store all day, Jopok, who never misses a chance to pick a fight with a fellow feline but also has a soft spot for Red, and the resilient Ibbeuni, who managed to escape a life of abuse. 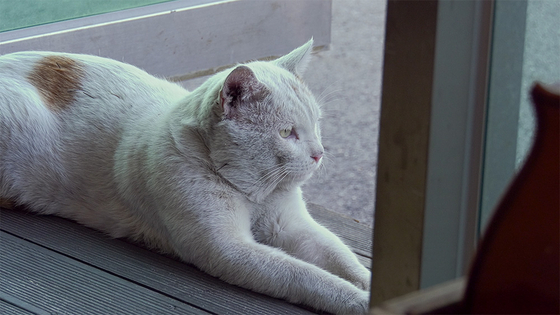 
Although these characters might not take direction well, Lee assures that filming cats is the easiest thing in the world.


“I would squat somewhere on the street and wait for hours, but it didn't bore me. I actually have an advantage [filming cats] because I have light footsteps and I enjoy being alone."

Lee says the difficulties he faced filming "Our Cats" stemmed from people.

“I thought people [who take care of the cats] would be happy doing what they are doing — you know, helping out the cats. But to my surprise, they weren’t,” the director said.

For the documentary, he met with and interviewed different people who were caring for the stray cats including an elderly lady who feeds the cats at the Noryangjin Fish Market and an owner of a Chinese restaurant in Chuncheon who gives cat food to the stray cats he spots eating leftover jjajangmyeon (black sauce noodles) from the delivery bowls waiting to be collected. “It’s not as if I placed the cats there, they were already living here [when I started feeding them],” the owner mumbled when a resident complained that his actions attract the cats to the neighborhood. 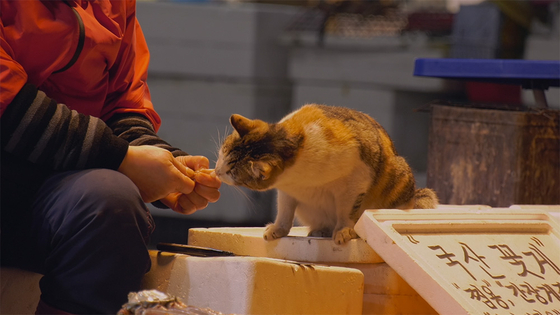 An old lady who is one of the sellers in Noryangjin Fish Market feeds this cat every day when it comes by. [M&CF, INDIESTORY] 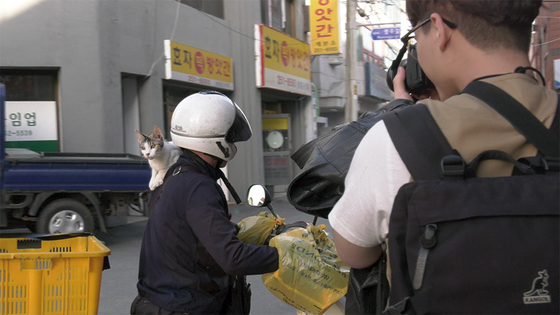 A Chinese restaurant owner delivers daily cat food for the street cats using his own expenses. His companion cat, who likes to climb up his shoulders, sometimes tags along in his delivery. [M&CF, INDIESTORY]


“The most important thing about a cat documentary is the space, the village,” Cho said. “People can leave when their homes undergo redevelopment, but since cats are territorial animals, they stay. Is it truly a good environment for everyone to live in only if clean buildings go up if communities are destroyed?


“Our main setting in the film are old towns, and there isn’t a clean street in sight,” Cho said. “That’s the kind of environment cats live in. And those who can barely look after themselves are the ones who take care of the cats.”

Both Lee and Cho reiterated that anything that didn't go to plan in the filming process was down to the people, not the cats.

“We actually wanted to film year-around in Hyoja Village where they were planning to build a cat village, but so many disputes arose [among the residents] that we had to leave,” Lee explained.

“We first went to Noryangjin Fish Market when its demolishment was imminent, and to the city of Seongnam, where the majority of people had left. The handful of people left are doing everything they can to transfer the cats that remain to a safer environment. In Busan Cheongsapo village, [where a cat village already exists,] we wanted to see if it’s possible for cats to adapt to a new environment, and everyone can live in harmony.” 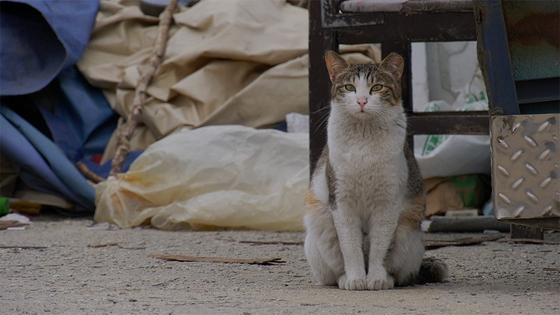 "Our Cat," which premiered on May 14, is about how town residents look after street cats and live harmoniously with them. [M&CF, INDIESTORY]


“My grandmother ran a restaurant in Chuncheon for a long time, and she had a cat,” Cho reminisced. “I looked into its eyes when it was a kitten and thought I was peering into a universe.”


This experience sparked Cho's love of felines. His current roommate is a cat called Happy that he adopted from the streets.

Lee fondly remembers his first encounter with a cat too. “There was this cat who used to come by our home in the countryside to evade the cold,” Lee said. When Lee moved to Seoul and began to live alone, he officially became a cat butler.

He met Lenny, his one and a half-year-old cat who has been with him for a year, through this film when a cat adoption center asked him to look after Lenny who had been shuttled from one center to another because of pneumonia. 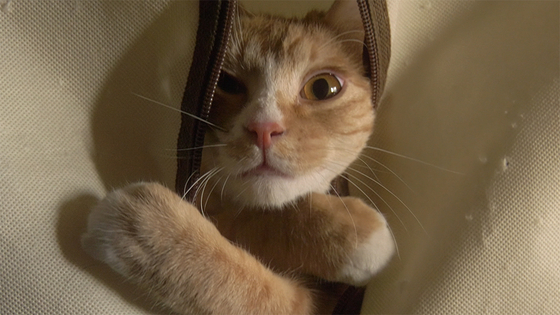 Photo of Lenny, Lee's cat who once suffered from pneumonia and has a hoarse voice. [M&CF, INDIESTORY]


“I was told that he was really shy and timid, but strangely enough, he layed down comfortably almost immediately on his first day here,” Lee said.

The duo has more cat-related ambitions for the future and are planning to create an omnibus short film series related to cats. For this series, another cat lover and director Kang Min-hyun, who is currently filming a documentary on street cats in Busan, will be joining them.

“I’m also thinking of creating a feature film about people whose lives were changed due to cats,” said Cho. His dream cast includes actors Ma Dong-seok and Im Soo-jung, as he heard that Ma is also a “butler” living with a rescue cat, and Im, who narrated “Our Cat,” feeds street cats even though she has a severe allergy to cat fur.

“There are those who don't understand why we should look after animals on the street when there’s enough going on [among people.]” Cho said. “We’re not asking or demanding that they should take care of the cats though. We just don’t want them to have any issues with those who do."

“And we hope that people refrain from killing, abusing or chasing away cats that already live in an area,” he continued. “When we ask the question, 'Are we going to live with cats, or with mice?’ the answer is obvious. The torment inflicted upon animals will come back to haunt people some day. We hope stricter legal measures can be taken on animal abuses.”

“We’re not saying that animals come first, we’re saying that we should be able to live together in peace,” Lee emphasized. “I hope the audience can get a glimpse of understanding into the reason why we love cats so much through the film.”