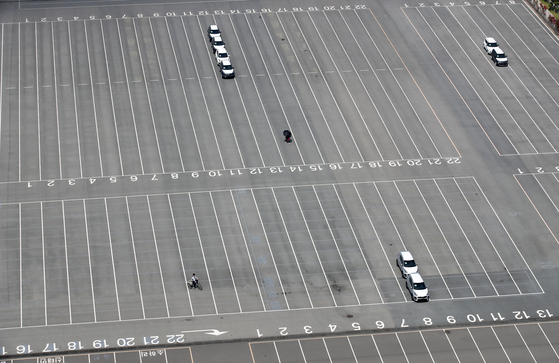 A view of the parking lot at Kia Motors' plant in Gwangju on May 11. The parking lot is used to store completed vehicles. The Korean automaker has suspended the operation of several of its production lines at its Gwangju plant and other facilities including one in Gwangmyeong, Gyeonggi, as overseas sales have been falling. The average manufacturers' utilization capacity ratio was at its lowest in more than a decade. [YONHAP]


The latest industrial output data shows the devastating blow that the coronavirus pandemic has had on Korean manufacturers as plant operations slowed to levels unseen since the global financial crisis more than a decade ago.

According to Statistics Korea on Friday, overall industrial output in April fell 5 percent compared to a year ago, the sharpest year-on-year decline since January 2009, when it tumbled 8.6 percent.

April’s drop is especially dramatic as in March overall industrial production actually inched up 0.8 percent on year, which was still significantly slower than the 4.9 percent growth reported in February.

This drop was largely due to the mining and manufacturing industry, which was directly impacted by the jump in coronavirus cases in Korea’s major overseas markets including the United States, which leads the world by number of confirmed cases as well as deaths.

The United States has nearly 1.66 million confirmed cases with the number of people that died from the infectious disease exceeding 100,000, accounting for one third of the deaths in the world.

The mining and manufacturing industry’s output fell 4.5 percent on year, the sharpest drop since September 2018 when it fell 6.5 percent.

The decline was cushioned by semiconductors, which grew 17.3 percent. Automobile output, however, suffered heavily, declining 19.1 percent.

But even semiconductor production has slowed sharply considering that in March output grew 45.3 percent on year.

The stark decline is more evident when compared to the previous month.

Semiconductor production suffered a 15.6 percent drop on month, largely due to the slowing global economy lowering demand for memory chips such as DRAM.

The overall mining and manufacturing industry’s output when compared to March has declined 6 percent, the sharpest drop since December 2008.

With major export markets including the United States under some form of lockdown, adding to the decline in demand, the average manufacturing plant capacity utilization rate fell from 74.3 percent to 68.6 percent.

This is the lowest in 11 years. 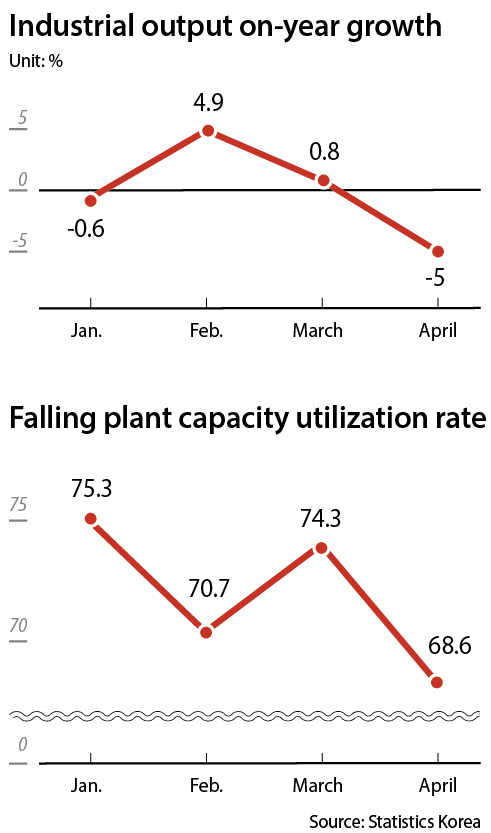 The service industry declined 6.1 percent on year, further falling from a 4.9 percent decline in March.

Hospitality, including restaurants and accommodation, continued to fall sharply, down 24 percent on year.

The hotel and accommodation industry suffered an especially heavy decline, with business halved 55.8 percent on year, while restaurants and bars declined 19.9 percent.

Sports, art and leisure continued to fall more than 40 percent for the second consecutive month.

The transportation and storage industries declined 21 percent, further widening from a 16.9 percent drop the previous month.

But when compared to the previous month the sector actually inched up half a percent, a significant turnaround from a 4.4 percent month-on-month drop in March.

While accommodation saw a slight on-month improvement, increasing 6.7 percent month, restaurants and bars turned around from a 16 percent decline to a 13.2 percent increase compared to March.

The positive turnaround was reflected in the increase in consumer spending.

Year-on-year spending has dropped 2.2 percent from a year earlier, but this is an improvement from an 8.8 percent drop in March.

When compared to the previous month, spending has gone up 5.3 percent, which is the biggest month-on-month jump in more than 24 years.

According to a statistics agency official, while consumer spending has not recovered to the level of last year, the month-on-month increase indicates that sentiment has improved since the number of confirmed cases in late April started to drop.

The central bank’s consumer confidence survey for the first time in four months saw an increase, while the majority of participants remained pessimistic.

The figure for this month is still up in the air.

Spending recently has been rising thanks to the government emergency relief grant of up to one million won ($800) per household, already claimed by more than 94 percent of households.

But the recent rise in the number of confirmed cases, which started with a cluster in Itaewon-dong, central Seoul, and has now infected workers at warehouses of one of Korea’s leading e-commerce companies Coupang, could affect sentiment with tougher social distancing measures reimposed.

The latest output report came a day after the central bank projected the bleakest economic growth forecast in two decades.

The central bank on Thursday lowered this year’s growth forecast to negative 0.2 percent.

If the economy actually contracts this year, it would be the third time that the country has ever seen negative growth.

The first negative growth was recorded in 1980, when the economy declined 1.6 percent, and again in 1998, when it declined 5.1 percent.

Although slightly more positive than the central bank, the Korea Development Bank has readjusted its growth projection for this year from the earlier 2.3 percent to 0.2 percent.

The government will be announcing its revision on economic growth, which earlier this year targeted 2.4 percent, next month when announcing the government’s economic direction for the second half.

In preventing major manufacturers from being crushed by the coronavirus outbreak, the government has been pushing for the approval of a third supplementary budget, which is estimated to be the largest of all supplementary budgets submitted to lawmakers this year at a minimum 30 trillion won.

While the first two budgets were focused mainly on small businesses and quarantine efforts as well as the government emergency relief grant targeted at also helping mom-and-pop stores in an effort to boost the domestic economy, the third budget will have to focus on propping up not only small businesses but also major companies that have been hit hard by the pandemic.

The goal is to help even large businesses so that they won’t be forced to lay off employees.

So far, a combined 23.9 trillion won in supplementary budgets has been approved this year.

The government will announce the size and details of its third supplementary budget request next week.

Minister of Economy and Finance Hong Nam-ki raised concerns about the coronavirus impact shifting from the service industry to the manufacturing industry.

“The current crisis is unlike any other crisis,” Hong said in a Facebook post on Friday. “The emergence of a health crisis resulted in a service industry crisis that has now spilled over to a manufacturing industry crisis spread across the world.”

However, he added that positive signs in the service industry and consumer spending show a glimpse of hope that the economic crisis could be overcome quickly if quarantine successes are backed up.

“While it is regrettable that there’s a spread [of the virus] in several communities recently, I have hope that rapid economic recovery could be achieved based on a successful quarantine,” Hong said.