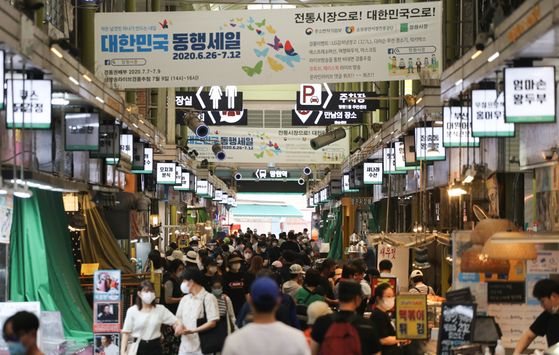 A banner advertising a government-led discount event hangs in the Mangwon Traditional Market in western Seoul on June 28. The government hopes to continue to boost the domestic economy by encouraging spending. However, industry continues to struggle with the impact of the coronavirus pandemic. [YONHAP]


Consumer spending in May managed to rise compared to a year ago, largely thanks to emergency relief grants paid to households by the government.

But manufacturing output shrunk at the sharpest rate since the global meltdown of 2008-2009, showing the continuing impact of the global pandemic.

The latest report by Statistics Korea came in the wake of economic institutions further lowering their growth forecasts as the coronavirus resurges in the United States.

According to the official statistics agency, consumer spending in May rose 1.7 percent compared to a year earlier, up from a 2.2 percent decline reported in April.

Consumer spending fell 8 percent in March when Korea's coronavirus patients surged, especially among followers of a religious sect in Daegu.

The increase was helped by spending on durable goods such as automobiles, which was up 14 percent thanks to a government cut in the 5 percent individual consumption tax on new car purchases.

With that success, the government has decided to extend the cut, which was supposed to expire by the end of June, to the end of the year.

However, the cut has been reduced from 70 percent of the original tax rate to 30 percent.

Even when compared to the previous month, consumption rose 4.6 percent, although that was down from the 5.3 percent month-on-month increase in April.

Purchases made online were up 18 percent, a direct result of the coronavirus lockdown, while spending in brick-and-mortar shops fell, including duty-free shops (minus 49.8 percent), department stores (minus 7.8 percent) and big discount marts (minus 0.7 percent).

Service industries saw declines that were somewhat eased in May.

Sales at restaurants and lodging places fell 14 percent compared to a year earlier. This was an improvement from the previous month when they fell 24.6 percent, or the 32.5 percent decline in March.

When compared to the previous month, restaurant and lodging sales grew 14.4 percent. 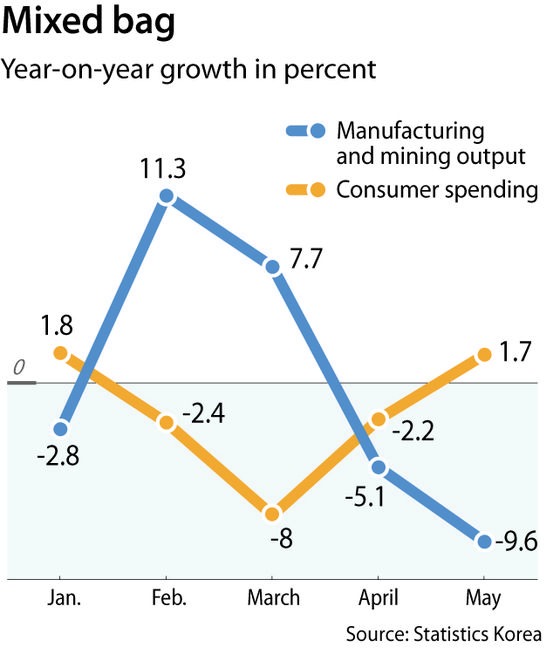 But manufacturing continued to struggle.

When compared to a year ago, output from all manufacturing and mining businesses declined 9.6 percent, the sharpest drop since March 2009's 10.1 percent year-on-year tumble.

Even when comparing on a monthly basis, output fell for two consecutive months at 6.7 percent.

The bright spot was semiconductor production, which grew 27.1 percent.

Production of automobiles, in contrast, declined 35 percent, largely due to a sharp decline in overseas sales.

Korean automakers in May saw overseas sales fall 47.8 percent, a stark contrast to a 9.4 percent sales increase in the domestic market.

“Services saw a significant decline due to the sharp spread of Covid-19 in February and March,” said Ahn Hyung-joon, head of the statistics agency’s short-term economic statistics. “But since April, as the Covid-19 situation relatively stabilized, the services industry started to rise and shot up after the relaxing of social distancing in early May.”

Manufacturing went in the opposite direction as the spread of the virus surged overseas, affecting Korea’s exports.

“While our exports suffered limited influence until March, exports started to shrink sharply in April and resulted in decreasing production in May,” said Ahn.

With major manufacturers struggling, smaller parts suppliers have been going out of business.

Investment, when compared to a year ago, grew 3.6 percent thanks to spending on machinery and transportation equipment.

However, when compared to the previous month, investment fell 5.9 percent, a turnaround from a 4.6 percent increase in April.

When compared to the previous month, it declined 1.2 percent, cushioned by the boost in consumption and in the service sector. In April, it fell 2.8 percent on a month-on-month basis.

The road ahead looks unfavorable as the coronavirus pandemic rages, forcing many economic think tanks to lower their global economic forecasts.

Growth for Korea’s economy, which is export-dependent, was also revised from a previous 1.2 percent decline to a 2.1 percent drop.

The relief grants' fillip to domestic spending is expected to wear off with the passing of the month. According to the government, at least 85 percent of the grants had been spent so far.

The government in hoping to keep consumption alive with a major discount event that started June 26 and will last until July 12. Discounts will be as high as 87 percent.

Attacking their own (KOR)