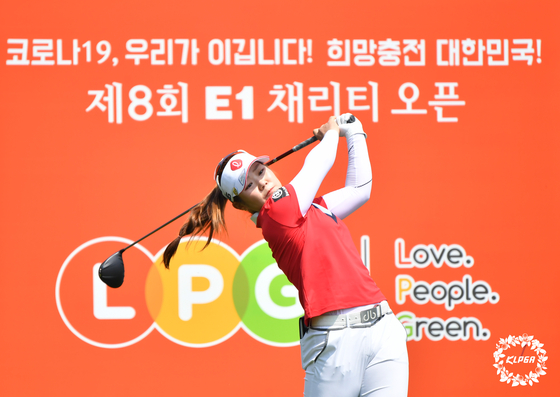 Lee So-young hits her tee shot during the final round of the 8th E1 Charity Open at South Springs Country Club in Icheon, Gyeonggi, on May 31. [KLPGA]

Lee, who started her final round two shots ahead of Ryu Hae-ran, shot a bogey-free round of three under par, 69, to finish the tournament at 17 under par, 271. She may not have made as many birdies as expected, but since Saturday’s round, Lee seemed to be consistent.

As Ryu made a birdie on the par-5 third, Lee closely held a lead by a shot, but just a few holes after it, Lee responded and regained her two-shot lead by making her first birdie of the day on the par-4 seventh. Lee’s bogey-less streak could have ended on the par-3 eighth, but with a successful up-and-down from the rough and by making a 10-footer, Lee was able to continue her streak.

Once the group headed to the second half of the round, Ryu once again chased after Lee on the par-4 13th. On the short par-4 13th, where all the players hit their drives to the green in one, Lee successfully managed to hit the green while Ryu missed hers to the bunker.

It may have seen more likely for Lee to extend her lead, but it was Ryu who changed things up and started to pressure Lee. From the right-side bunker, Ryu made an eagle by rolling her bunker shot right into the hole. Her eagle made Ryu the first player on the final round to make an eagle on the par-4 13th.

Although Lee wasn’t able to make her eagle putt, she still managed to pick up a birdie and hold the lead by a shot.

Lee finally gave herself some breathing room on the par-5 16th. On her third shot, where she hit it from a divot, Lee was right on point, where the ball just missed the hole, leaving herself a tap-in birdie. Ryu, too, responded by sticking her third shot within about six feet, but as Ryu missed her birdie putt and Lee made hers, Lee once again managed to extend her lead by two shots.

“I feel great to play well to pick up another win at South Springs Country Club, and feels great to win early in the season," Lee says.

With a win, Lee took home the prize money of 160 million won ($130,000). This allowed Lee to pick up her fifth victory on the KLPGA Tour. Throughout Lee’s round, she’s managed to pick up pars, but when it came to birdies, she struggled. However, Lee said consistently making pars may have helped her win.

Having made her KLPGA Tour debut in the 2016 season, Lee picked up her first win as a rookie at ChoJung Sparkling Water Yongpyong Resort Open with SBS in July that year. A win was impressive, but Lee ended up finishing second in the 2016 Rookie of the Year race.

After a winless 2017 season, Lee made quite a comeback in the 2018 season by picking up three wins. With the KLPGA Tour having such a competitive field of players in the 2017 season, Lee didn’t top any of the awards categories, but she did manage to finish third in the KLPGA points standing.

Following an impressive 2018 season, Lee once again spent a winless season in 2019. She came close to picking up a win by having three runner-up finishes. But this year, she is off to a quick start with a win in only her third tournament of the season. Since the first tournament of the 2019-20 season, at the Hyosung Championship with SBS Golf in Vietnam, Lee finished fourth and at the 42nd KLPGA Championship, which ended on May 17, she once again finished fourth.

Having experienced a number of runner-up finishes including the 2019 season and the Rookie of the Year race, Lee says this time, she set her sights on the Player of the Year race. So far, Lee seems to be on a good pace. With a win, Lee is expected to top the KLPGA Tour’s player of the year standing, at 134 points, as well as the money ranking.

Although Ryu finished runner-up, she is expected to top this year's Rookie of the Year race. Aside from Ryu, notable KLPGA Tour golfers like Choi Hye-jin and Jang Ha-na finished tied for 10th at nine under-par, 279.

Once again, the tournament, where it was played without any fans, saw few LPGA Tour players, where world No. 10 Lee Jeong-eun finished tied for 21st at seven under-par, 281, and No. 13 Kim Hyo-joo finished tied for 33rd at four under par, 284.

The KLPGA Tour will continue its season without any gallery on the course with the 10th Lotte Cantata Ladies Open at Sky Hill Jeju in Jeju Island starting from June 4 to 7.