The Pentagon on Monday left open the possibility that the U.S. military is improving the capabilities of its advanced antimissile system in the southern region of the Korean Peninsula, contradicting a denial of any upgrade by Seoul's Ministry of National Defense.

A surprise, overnight transport last Thursday and Friday of equipment into the U.S. Forces Korea’s Terminal High Altitude Area Defense (Thaad) base in Seongju, North Gyeongsang, prompted speculation that the U.S. military is upgrading the capabilities of the powerful antimissile system, which has been the subject of bitter complaints by China and North Korea. Seoul’s Ministry of National Defense, however, rejected the analysis, stressing that the U.S. military was only replacing parts to maintain the system. 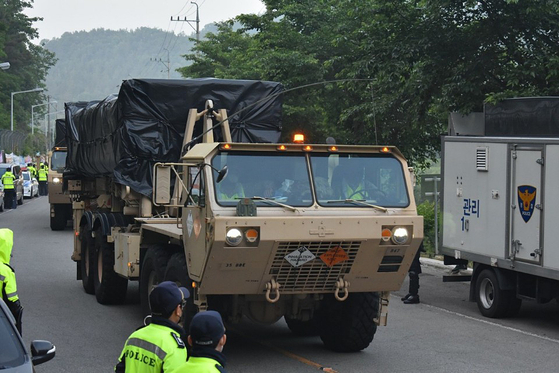 Military vehicles enter the U.S. military's Terminal High Altitude Area Defense anti-missile base in Seongju, North Gyeongsang, on Friday. The Ministry of National Defense and the U.S. Forces Korea said transports were made to maintain the system by replacing old parts. [YONHAP]

Asked about the connection between the recent transport and efforts to advance interoperability between the Thaad and Patriot missile systems, the U.S. Defense Department told the JoongAng Ilbo on Monday that it does not want to comment on a specific system. The Pentagon, however, stressed that the U.S. military is “continually improving” capabilities to counter all threats against not only the United States but also its partners and allies, leaving open the possibility of an upgrade.

Since Friday, the Ministry of National Defense maintained that it has supported the U.S. Forces Korea’s shipment of equipment to the Seongju base from Thursday night until Friday morning. The shipments were for construction to improve working conditions of the Korean and U.S. soldiers on the Thaad base and to replace some old parts, the ministry said.

The ministry said no upgrade to the Thaad system was made, stressing that even new interceptor missiles shipped to the base were merely to replace old ones.

Sources, however, told the JoongAng Ilbo that new systems to improve the performance of the Thaad system and augment its interoperability with the Patriot (PAC-3) system were included.

A source in Washington told the JoongAng Ilbo on Sunday that the replacement of equipment was intended to operate the PAC-3 system using the Thaad system’s radar.

“This is not a simple replacement of old parts,” said the source. “It is intended to make an augmentation so that the AN/TPY-2 radar of the Thaad system will share detection information with the PAC system in real time.”

It is no secret that the United States has plans to upgrade its Thaad systems deployed around the world. According to a Missile Defense Agency 2021 budget briefing in February, about $1 billion was to be allocated to upgrade seven Thaad units in the U.S. mainland, Guam and Seongju.

The agency also said software development to remotely launch Patriot missiles using the powerful radar of the Thaad systems was completed last September and would be deployed during the first half of this year.

According to military sources, progress was made in late 2019 to advance interoperability between the Thaad and Patriot systems. The United States wants to further integrate the two systems in order to build a multi-layer defense system that covers different ranges and interception altitudes at the same time, they said.

The U.S. military’s priority for the Korean Peninsula is using the Thaad radar system for remote launches of the new PAC-3 MSE missiles, a Korean military source said. “There are many obstacles to bring in new Thaad launchers here,” he said.

The Thaad battery in Seongju at present has six launchers, each equipped with a radar system. There are eight interceptor missiles for each launcher, putting the total number of Thaad missiles in Korea at 48.

The AN/TPY-2 radar for the Thaad system has a range of 2,000 kilometers (1,243 miles). Replacing the Patriot’s 100 kilometer-range radar system is expected to dramatically improve the effectiveness of the Patriot missiles deployed around the Korean Peninsula.

As of now, the Korean military deployed about 40 Patriot launchers around the country. Adding 60 launchers of the U.S. Forces Korea, the peninsula has a total of 100 launchers deployed.

The Defense Ministry repeated its stance on Monday that the surprise shipment last week was intended to maintain the Thaad system, not for an upgrade. It stressed that a U.S. briefing made last year about the replacement equipment said nothing about an upgrade.

The ministry, however, refused to confirm if the shipment included electronic equipment.

“For a ground-to-air missile system, electronic equipment for data collection means sensors, in other words, radar,” said Ryu Sung-yeop, a researcher at the Korea Research Institute for Military Affairs.

Military sources said the United States can make an independent decision to upgrade the Thaad system. “Just like any other assets of the U.S. Forces Korea, it is up to the United States to make an upgrade,” a source told the JoongAng Ilbo.

Other sources said the government offered detailed explanations to China early last month through various channels about the planned transport of equipment to Seongju. Beijing did not react “negatively,” the sources said.