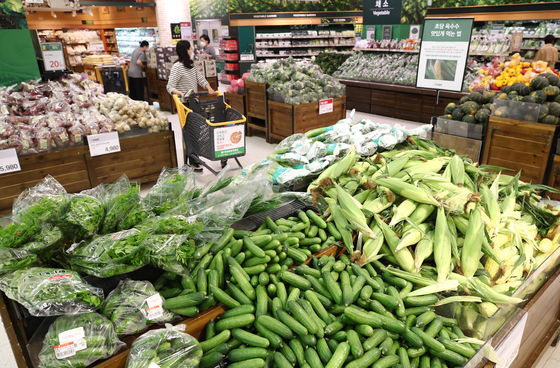 A shopper strolls around a discount mart in Seoul on Tuesday. While the overall inflation fell year-on-year in May food prices were up. Especially vegetable prices increased nearly 10 percent, increasing household burden. [YONHAP]


Consumer prices fell in May, only the second monthly decline ever for the statistic.

While the Covid-19 pandemic contributed to the lower prices, some foods became rapidly more expensive. The price of Napa cabbage, which is used to make kimchi, more than doubled.

According to Statistics Korea on Tuesday, consumer prices last month fell 0.3 percent compared to the same period last year. The last time consumer prices fell was in September 2019, when they dropped 0.4 percent.

Korea has compiled the statistic since 1965.

The statistics agency cited the sharp decline in petroleum prices and the government expansion of education expenses support and free school meals in explaining the drop last month.

The official added that individual service prices, including the slower increase of restaurant prices resulting from the continuing social distancing. partially affected the inflation rate.

Service sector prices, which not only include public services, such as school tuition, but also individual services, such as restaurant meals, grew 0.1 percent year-on-year. It is the slowest growth in more than two decades. The last time service prices grew at such a low rate was in December 1999, when they were also up 0.1 percent.

“The prices of vegetables and fish went up as harvesting wasn’t good, while many people eat at home rather than going out to restaurants due to the Covid-19,” said Ahn at the statistics agency.

The agency official projects that individual service prices will increase due to the disbursement of government emergency relief grants in mid-May. But as the relief grants are one-offs, the effects could wear off quickly.

Deflation is now a serious concern as core inflation remains stuck at low levels. It has been under 1 percent for 10 consecutive months.

In May, core inflation, which excludes volatile factors such as agriculture and petroleum prices, was only 0.5 percent. It has been around this level since coming in at 0.9 percent in August last year.