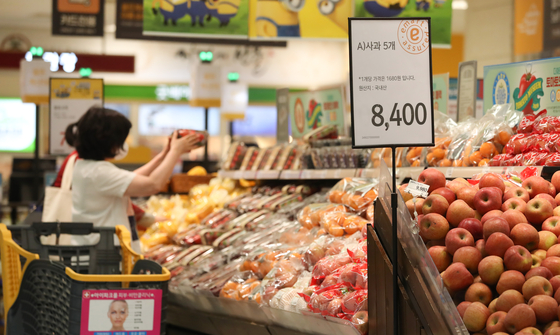 A shopper at the vegetable corner at amajor discount mart in Seoul on Monday. According to Statistics Korea report, inflationgrew at the slowest pace in six months. [YONHAP]

Inflation fell to its lowest level in six months as the coronavirus drove down international crude prices and suppressed consumer spending as people stayed home.

According to Statistics Korea Monday, consumer prices in April grew 0.1 percent, the slowest growth since October, when inflation was flat compared to the previous year.

This is a contrast to the first three months of this year when inflation rose more than 1 percent, ending 12 consecutive months of inflation below 1 percent, which was a record for Korea.

This drove down the prices of manufactured goods 0.7 percent compared to a year earlier.

The coronavirus impact was also evident, particularly in food prices.

Prices for restaurant dining only grew 0.8 percent as people avoided eating out.

On the flip side, agriculture, livestock and fishery prices rose 1.8 percent as more people ate at home.

Leisure and culture prices fell 2.5 percent when compared to a year ago while overseas group tour prices fell 10.1 percent as travel shut down.

Core inflation, which excludes volatile items such as agricultural produce and petroleum, was 0.3 percent in April. Core inflation has remained below 1 percent for nine consecutive months. 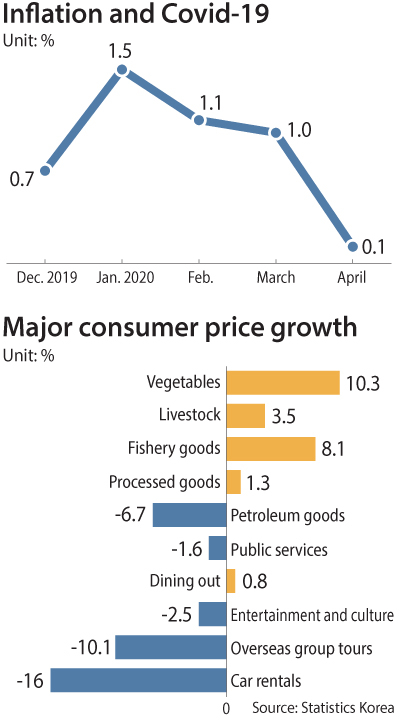 
The low inflation numbers came a few days after the government announced the worst decline in exports in 11 years.

On Saturday the Ministry of Trade, Industry and Energy announced that Korea’s exports shrunk 24.3 percent in April year-on-year to $36.9 billion. It was the sharpest decline since May 2009, when exports tumbled 29.3 percent.

As imports fell at a slower rate of 15.9 percent to $37.9 billion, Korea’s string of trade surpluses ? which has lasted for 99 consecutive months since January 2012 ? finally came to an end.
Korea reported a trade deficit of $946 million last month.

Not even semiconductor exports, which were a driving force for Korea’s exports, were able to dodge the coronavirus's impact.

Exports to major trading partners all shrunk. Exports to China fell 17.9 percent, to the United States 13.5 percent and to Europe 12.8 percent.

The government said the situation will be much worse in the coming months.

“The impact of Covid-19 including on the economy and unemployment is just beginning,” said Vice Finance Minister Kim Yong-beom, during a meeting on Monday.