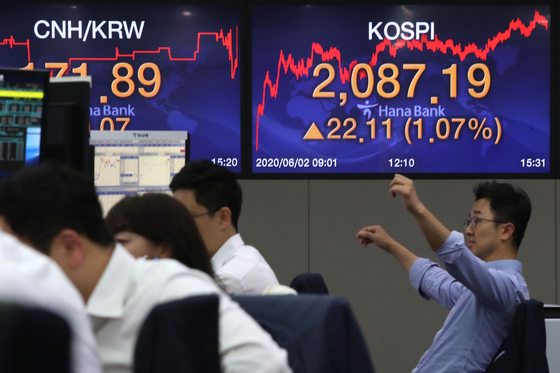 The final Kospi is displayed on the screen inside a dealing room in Hana bank, Jung District, central Seoul, Tuesday. [NEWS1]


Stocks rose by more than 1 percent Tuesday, extending a winning streak to a third consecutive session on hopes for economic reopening, despite uncertainties from the spreading protests against police violence in the United States. The won fell against the dollar.

The growing hopes for economic reopening boosted investor sentiment in the face of growing unrest in the United States and the escalating Sino-American tensions.

"We are still seeing market expectations that the post-lockdown economic recovery will pick up down the road," said Kim Yong-gu, an analyst at Hana Financial Investment.

Among gainers, shipbuilders outshined others on news that big-three players here have landed a mega-deal to build LNG carriers.

Most other large caps finished in positive terrain.

Shares of banks were in positive territory after the Bank of Korea lowered the country's base rate to a historical low of 0.5 percent. Woori Financial Group, increased by 6.36 percent and the Industrial Bank of Korea risen by 6.13 percent.

Among Insurance companies, Samsung Fire & Marine Insurance gained the most with 8.85 percent followed by DB Insurance adding 6.35 percent.
The secondary Kosdaq inched up 7.86 basis points or 1.07 percent to close at 743.58.

Bond prices, which move inversely to yields, closed lower. The yield on three-year bonds rose 2.0 basis points to 0.851 percent, and the return on the benchmark ten-year government bond inched down 0.6 basis points to 0.65 percent.