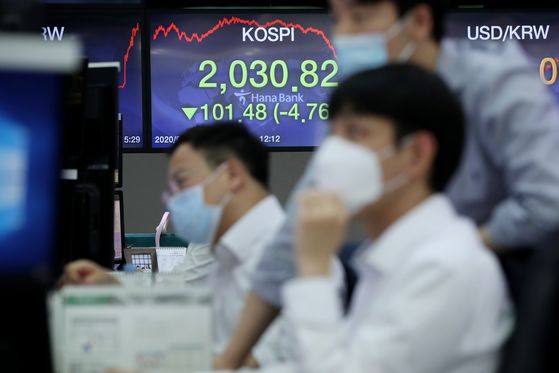 Employees sit in front of a screen showing the Kospi close in the trading room of Hana Bank in Jung-district, central Seoul, Monday. [YONHAP]


Stocks sank almost 5 percent amid rising concerns of a second wave of the coronavirus, extending their losing streak to a third consecutive session. The won fell sharply against the dollar.

Individuals raked in a net 1.24 trillion won, while foreigners sold off a net 474.4 billion won, extending their selling streak to a fifth session. Institutions offloaded a net 764.2 billion won.


The plunge in the main index came amid rising fears of a second wave of the Covid-19 pandemic in the wake of the global economic reopening.
"Investor sentiment seems to have worsened over concerns of a second wave of Covid-19, particularly in the U.S. and China," said Lee Kyung-min, an analyst at Daeshin Securities.

The number of new cases is on a decline in New York, but it is rising in some 20 other states, including Florida, analysts said.

The United States is one of  Korea's largest trade partners, along with China.

Share prices of refineries were in negative territory, despite oil prices slightly recovering from an all-time low in April. SK Innovation shed 7.39 percent to close at 106,500 won and S-Oil inched down 4.49 percent reaching 66,000 won.