Korea’s participation in the G7 summit means the group will be expanded permanently and the country will become a formal member, presidential spokesman Kang Min-seok said Tuesday, rejecting reports that the invitation is a one-off.

“If Moon’s trip to the United States is realized later this year as planned, he won’t be participating in the G7 summit as an observer for a one-time attendance,” Kang said. “It means Korea will become a formal member of a new international system called G11 or G12.”

Kang said membership in a new global forum is a symbol of Korea’s growing prestige. 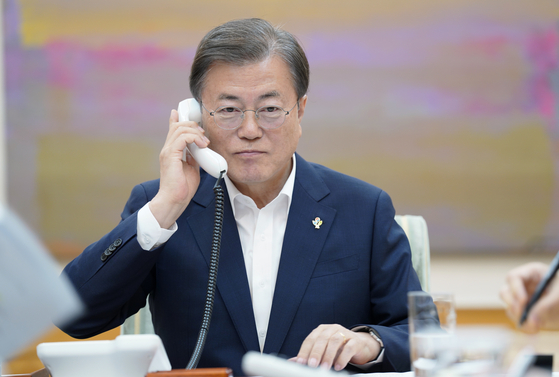 President Moon Jae-in talks to U.S. President Donald Trump over the phone on Monday. The two leaders had a 15-minute phone talk starting 9:30 p.m. on Monday at the request of Trump. [Blue House Press Corps]

According to Kang, Trump told Moon that the G7 is an outdated system that fails to reflect the current state of international affairs. The U.S. president said he is seeking to expand the G7 to a G11 or G12 by including more countries and asked Moon’s opinion.

Starting as a forum of major industrialized countries to discuss the economic and financial crises triggered by the oil shock of 1973-74, the G7 is an organization of the world’s seven largest advanced economies: Canada, France, Germany, Italy, Japan, Britain and the United States.

Last week, Trump said he would postpone until September a G7 Summit he was supposed to host in June. He also said he wanted to invite Korea, Australia, India and Russia to the meeting.

The idea prompted speculation that Trump wanted to create a geopolitical bloc to contain China amid escalating tensions between the two nations in the aftermath of the coronavirus pandemic. The White House admitted that the summit will discuss China.

During their phone conversation on Monday, Moon agreed with Trump that the G7 has limits and welcomed the idea of expanding the elite group. “Korea will play all possible roles in terms of disease prevention and economy,” Moon was quoted as saying.

“If the face-to-face meeting of the leaders will successfully take place at an appropriate time, it will be a signal that the world will return to normal conditions,” Moon told Trump.

Asked by Trump about including Brazil , Moon said it deserves the opportunity because of its size. Trump said he will work on it, Kang said.

The White House also said Monday that Trump and Moon spoke about “a range of economic and national security issues, including the coronavirus pandemic and restoring the strength of the global economy.” According to White House spokesman Judd Deere, Trump and Moon also discussed progress toward convening the G7.

A senior presidential aide on Tuesday dismissed concerns that China will be disgruntled by Korea’s participation in the global forum.

“During the two presidents’ phone talks yesterday, the China issue was never mentioned,” said the source. “They didn’t even discuss Hong Kong. The Korean government believes that there will be no opposition from China.”

Moon has been working hard to improve ties with China using Chinese President Xi Jinping’s trip to Korea, expected later this year, as a turning point. Bilateral relations with China have been chilly since the deployment of the U.S.-led Terminal High Altitude Area Defense (Thaad) antimissile system in Korea in 2016.

Last month, Xi reaffirmed a plan to visit Korea this year in a phone call with Moon, but Blue House sources said no tangible progress has been made.

While Korea is sanguine about Trump’s invitation, Japan is wary of another Asian country joining the prestigious forum.

“It is irrational to abruptly add four more members to the summit,” a Japanese Foreign Ministry official was quoted as saying by the Sankei Shimbun on Tuesday. The source said expanding the G7 to a G11 or G12 requires approvals from the current members, and the decision is not up to the United States.

On Monday, a Japanese Foreign Ministry official told the Yomiuri Shimbun that the participation of Korea and Australia will weaken Japan’s presence in the G7 as the only Asian member.

“The G7 will continue to be an important framework allowing the participating major countries to jointly tackle global issues and confirm cooperation and coordination,” Chief Cabinet Secretary Yoshihide Suga also said at a news conference on Monday.

Meanwhile, Trump’s idea of bringing Russia back to the group was rejected by the British and Canadian leaders. Russia was expelled from the group — previously known as the G8 — in 2014 for its annexation of Crimea.