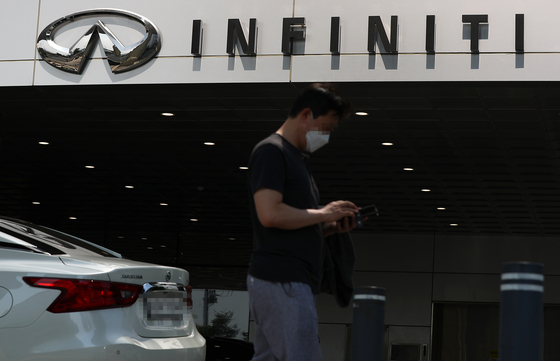 A pedestrian walks by a Nissan customers service center in Seongdong District, eastern Seoul, on May 28. [YONHAP]


Owners of Nissan cars are expressing their frustration after the Japanese carmaker decided to permanently close its operations in Korea. They are furious about the possibility that the move will have a negative effect on the quality of after-sales service. There are also concerns that the used-car prices of Nissan vehicles will plummet. Frustration built up so much that some are even considering suing for damages.


Nissan announced on May 29 the company, including the premium Infiniti brand, will exit the Korean market by the end of December, 16 years after it first rolled into the country in 2004. The company never manufactured here, but maintain a distribution and service network.

The decision came as Nissan struggled with dismal sales figures, a result in part of anti-Japanese sentiment that started building last July after Tokyo restricted the export of some materials to Korea.

Sales of Nissan cars dropped by 40 percent and Infinity cars by 6 percent in Korea last year. This year Nissan barely managed to keep its head above water, as only 813 Nissans and 159 Infintis were sold through the end of April.

“Despite Nissan Korea’s effort to continue business in the local market, the business condition here deteriorated due to both internal and external factors,” the local unit of the Japanese carmaker said Thursday in a statement. “The headquarters concluded that it would be difficult for the brand to again build a sustainable business structure in Korea. We sincerely thank everyone who has expressed love for our brands.”


Customers of Nissan and Infiniti are shocked about the car maker’s sudden withdrawal. 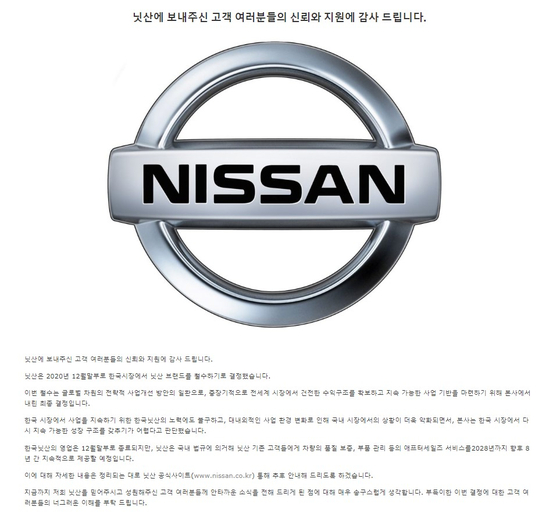 
Their biggest concern is that this might lead to service degradation. Nissan has promised to follow Korea’s vehicle administration law and provide necessary car parts and after-sales services for the next eight years. Car owners are skeptical if the company will fully commit to its pledge.

Industry watchers say the negative impact will be greater for customers with Nissan cars less than three years old. The company's warranty period is three years. Nissan cars under warranty can be fixed in repair centers directly managed by the company.

“It’s highly likely that Nissan will close all service centers locally, except for one or two places,” said an industry official. “Customers who wish to use car repair services from the company will inevitably have to travel long distances, which is a waste of time and expense for the consumers.”

Subaru and Mitsubishi, which left the country in 2012 and 2013, no longer have company-owned service centers in Korea, despite the two promising to maintain its service centers for eight years.

Nissan's policy for post 2028 is still under mystery. According to Nissan’s official statement, the company did not address the question of what will happen after eight years.

“We will provide after-sales service, such as quality assurance and car parts management, for the next eight years until 2028. Further details will be informed later,” the company wrote on its official website.


Nissan’s decision to leave the country may negatively affect the company’s brand value, which could drag down the price of its vehicles in the used-car market.

“Secondhand cars of Nissan will not drop right away. However, problems with service will make Nissan cars less popular in the future. Taking that into account, a price drop is inevitable since used-car dealers would want to sell their inventory as fast as possible,” said an official from the secondhand car industry.

Another issue concerning Nissan car owners is the increase in car insurance fees. The Korea Insurance Development Institute (KIDI) determines insurance premiums for each model four times every year, according to the "damageability" and "reparability" measured by tests conducted at the institute.

Ratings run from one to 26, with higher numbers attracting bigger premium discounts. Nissan's departure means that the company’s existing models will not be able to receive any discounts.

One group of Nissan car owners organizing on Naver under the “Shift Nissan Club” name is reportedly preparing for a class action suit against the company. Community members argue that Nissan should be responsible for the brand image damaged by its closing in Korea, as well as for the many promised deals and services that would not be kept.

It wrote in an announcement recently that the community’s managing directors “will finalize our decision on whether to go forward with a class action suit against the company, after many of our members demonstrated an interest in doing so.”

Nissan Korea said it would do its best to minimize any inconveniences in customer services.

“We are discussing with dealers on how to provide customer services in the future,“ said the company. “We will do our best to provide as much service as possible to our customers.”