A Daegu court began the process of liquidating assets of a Japanese company that ignored a Korean Supreme Court order to compensate victims of wartime forced labor.

The Pohang branch of the Daegu District Court started the process by serving notice to Japanese steelmaker Nippon Steel on Monday that the court had ruled to seize the company's assets, according to the plaintiffs’ legal representative Wednesday.

The court decided to employ a public notice because the Japanese Foreign Ministry did not deliver court documents to Nippon Steel. Service of process through public notification takes place when there is no other means to deliver documents to a defendant. In this case, the documents are posted on the court's website and notice will be considered to have been served after two months.

After Aug. 4, the court can order the sale of company assets in Korea.

The Japanese companies have refused to comply, and plaintiffs began the legal process to seize their assets in Korea. Tokyo maintains that all compensation issues related to colonial rule were resolved through a 1965 treaty normalizing bilateral relations.

The assets in questions seized by a Daegu court last year are 194,794 shares, worth around 973 million won, in PNR, a rotary hearth furnace technology joint venture by Nippon Steel and Korean steelmaker Posco.

But even with notice served, the liquidation of assets may not begin in August.

Japan has warned that the liquidation of assets of Japanese companies in Korea will provoke a strong retaliation, and the latest court action is expected to escalate tensions between Seoul and Tokyo.

Seoul on Tuesday decided to resume its complaint with the World Trade Organization (WTO) about those export restrictions as the two sides failed to make progress in negotiations to resolve the trade spat.

Seoul temporarily suspended the WHO complaint last November — along with an earlier decision to terminate the General Security of Military Information Agreement (Gsomia) intelligence-sharing pact with Tokyo — in favor of dialogue.

Motegi was reported in Japanese media to have expressed concern over the wartime labor issue, and said the liquidation of Japanese assets would result in serious repercussions.

Yoshihide Suga, Japan’s chief cabinet secretary, said in a briefing Thursday, “The liquidation of assets of Japanese companies could bring about a serious situation,” adding that it “must be avoided” by both sides.

Suga called the Korean Supreme Court rulings and the local court procedures “a violation of international law” and said that Motegi in the phone conversation with Kang urged an early resolution of the issue.

He did not elaborate on the specifics of possible retaliatory measures.

However, Japan’s right-wing Sankei Shimbun reported that in the case of the liquidation of assets of Japanese companies, Tokyo could levy additional taxes on Korean products among other measures.

Kim In-chul, spokesman for the Korean Foreign Ministry, said in a briefing in Seoul Thursday on the issue of compensation of force labor victims, “We will do our best to closely consult with Japan.”

He added, “We are taking an open stance to reach a reasonable solution, comprehensively taking into consideration respect for the decision of the judicial branch, realizing the rights of the victims and bilateral relations.”

On the serving of notice in Daegu, he said, “It’s a judicial procedure, so I have nothing more to say on that.”

Kim said Kang and Motegi did not discuss the Daegu court decision during their phone conversation the previous day.

However, Kim acknowledged, “It appears that things will be different before and after the liquidation [of assets].” 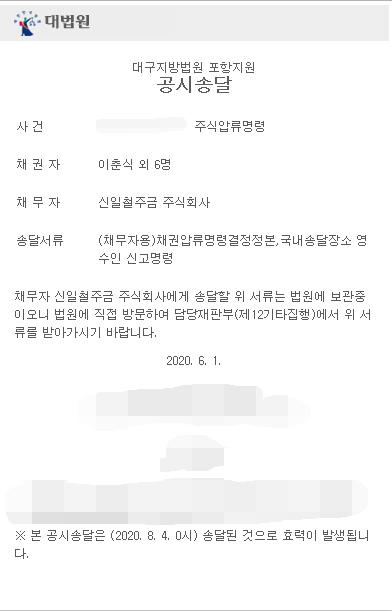