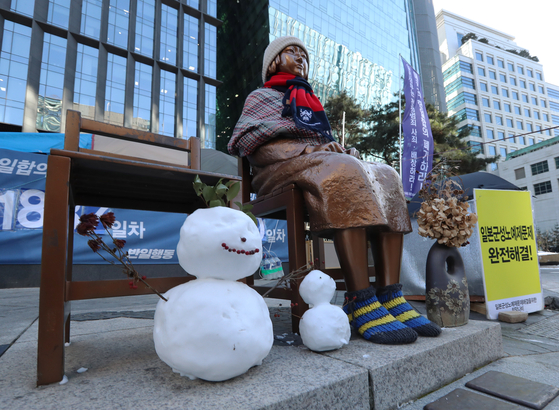 A statue representing comfort women victims near the former Japanese embassy in central Seoul is bundled up for the cold weather, as a local court made a landmark ruling Friday that the Japanese government is responsible for paying damages to victims of its wartime sexual slavery. [YONHAP]

Kang made the remarks in a phone call with Japanese Foreign Minister Toshimitsu Motegi to discuss the court decision, according to the Korean Foreign Ministry in a statement, amid ongoing tensions between the two countries over historical issues.

The two envoys “shared the view that the diplomatic authorities of the two countries will continue close communication on various pending issues between Korea and Japan,” it added.

The court ruled that the Japanese government must pay 100 million won ($91,100) each to 12 comfort women victims who were forced into sexual slavery by the Imperial Japanese Army during World War II, the first such legal victory of its kind.

The ruling Friday concluded an arduous legal battle of more than seven years. Of the 12 plaintiffs, only five are still alive.

“State immunity cannot be applied to the inhumane actions,” Judge Kim Jeong-gon said in the Friday ruling. “Japan’s unlawful actions are proven by various evidence, data and testimonies in the courtroom. The plaintiffs clearly suffered unimaginable physical and psychological pain.”

The group of 12 former comfort women victims, including the late Bae Chun-hee, filed the civil suit against Japan in August 2013. The plaintiffs said they were raped, beaten and starved while they were forced into sexual slavery. They also said it was illegal for Japan to set up and operate the sexual slavery camps.

Japan refused to participate in the trial, citing state immunity — a principle of international law that a particular court or tribunal does not have jurisdiction over a state without its consent. The court, however, made clear that it won’t condone the argument in a trial of crimes against humanity.

“Japan is responsible for committing premeditated and organized acts against humanity in violation of the international standard and norms,” said Judge Kim. “State immunity does not extend to such a case. Therefore, the court concluded that it has jurisdiction over this trial.”

The court said it will grant the plaintiffs’ request to receive compensation of 100 million won each but stressed that each victim actually deserves a larger amount.

The Japanese government refused to receive any documents related to the lawsuit, citing Article 13 of the Hague Service Convention. It says a state may refuse to comply with a court service only if it deems that compliance would infringe on its sovereignty or security.

As the court’s attempt to start a mediation process was rejected by Tokyo, the plaintiffs demanded a formal trial in October 2015. The judiciary granted their wish and assigned the case to the Seoul Central District Court in January 2016.

However, it took years to hold the first hearing of the trial. As the Japanese government refused to participate in the process, the court took an extraordinary measure in January 2020 of “service by public announcement” to start the trial in absentia. When it is impossible to serve the accused, the paperwork will be kept in the court and an announcement is made to publicly notify the accused instead.

Four hearings took place last year, and the final argument was made in October.

“When Korea and Japan normalized relations in 1965, a bilateral claims settlement agreement somewhat covered the forced laborer issue,” Kim Gang-won, a lawyer representing the plaintiffs, said Friday, welcoming the verdict. “But the comfort women issue was never discussed at the time, so the victims deserve to receive compensation for their damages by filing lawsuits.”

Friday’s key ruling is expected to influence a similar lawsuit filed by a group of comfort women victims. The Seoul Central District Court will announce Wednesday its ruling for a damage suit filed by 20 victims and their surviving family members.

Their suit was filed in December 2016, and the 20 plaintiffs are each seeking 200 million won. The trial also proceeded in absentia as Japan argued state immunity.

Diplomatic relations between Korea and Japan have been strained in recent years over ongoing historical disputes and a trade spat.

Katsunobu Kato, the Japanese chief cabinet secretary, said Japan will not appeal the ruling as doing so would put the country under Korea's jurisdiction, in a press conference the same day.

He said that the decision went against a 2015 comfort women deal.

Korea and Japan struck a deal attempting to resolve the comfort women issue in December 2015 "finally and irreversibly,” and included an apology by the Japanese government and a 1-billion-yen ($9.6 million) fund for the victims.

The agreement provoked an immediate backlash from some survivors and civic organizations, who claimed Japan should take clearer legal responsibility by paying reparations. The Moon Jae-in administration said it would not scrap the 2015 bilateral deal, despite it being “flawed,” but has also underscored that the agreement is not a true resolution of the issue of Japan’s wartime sexual slavery.

Motegi in a press conference referred to the latest ruling as an “irregular situation that cannot be understood” and said that Japan will respond “leaving all options open.”

Tokyo claims that all compensation issues related to its 1910-45 colonial rule were resolved through a 1965 treaty normalizing bilateral relations.

The Japanese government in turn is reviewing raising the comfort women ruling with the International Court of Justice (ICJ), according to Japanese media reports.

However, the ICJ lawsuit would become void if Korea doesn’t accept it.

On the same day as the ruling, the Korea and Japanese governments named new top envoys to each other’s countries, though it is unclear if a change in ambassadors can ease existing tensions.

Kang Chang-il, a former four-term lawmaker from the Democratic Party, was named Korean ambassador to Tokyo on Friday. Japan appointed Koichi Aiboshi, its ambassador to Israel, as its top envoy to Seoul replacing Koji Tomita.

Aiboshi served in the Japanese Embassy in Seoul on three previous occasions. His last posting in Seoul was from 2006 to 2008. He previously served as an ambassador to the Association of Southeast Asian Nations and the head of the Foreign Ministry’s Consular Affairs Bureau. He has served as Japan's ambassador to Israel since July 2018.

Kang, who hailed from academia before first winning a National Assembly seat in 2004, is known as an expert in Japan-related affairs. He received his doctorate degree from the University of Tokyo and previously headed the Korea-Japan Parliamentarians' Union from 2017 to 2020 and remains an honorary chairman.

The South Korean government sees the Tokyo Summer Olympics, expected to be held in July, as a possible opportunity to put back on track denuclearization dialogue with North Korea, similar to the PyeongChang Winter Olympics in February 2018 leading to a period of détente on the Korean Peninsula.

But Seoul-Tokyo relations hit a low after Japan’s implementation of export restrictions on South Korea in the summer of 2019, seen as retaliation against forced labor rulings.

Japanese conservatives have also raised as an issue former Rep. Kang’s visit to the Kuril Islands, disputed by Japan and Russia, in May 2011.

Kang thus faces a daunting task to bring Seoul and Tokyo together, at a time when U.S. President-elect Joe Biden is expected to encourage greater cooperation between American allies in East Asia amid greater Chinese assertion in the region.

With Japanese Prime Minister Yoshihide Suga’s approval ratings sliding in recent days over his coronavirus response, analysts point out that Tokyo could employ a tougher stance on Seoul as a tactic to raise the administration’s popularity.

The Korean government is also planning to host a nearly annual trilateral summit with Japan and China, though the timing is unclear because of the Covid-19 pandemic and difficulties getting the other two leaders to commit.