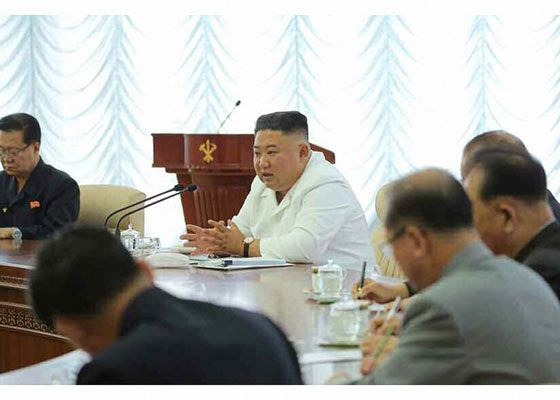 There was no mention of South Korea or the North’s Sunday announcement that it would pull out of an inter-Korean liaison office at the gathering, focusing instead on issues of economic self-sufficiency, improving living standards and personnel issues, according to the regime mouthpiece Korean Central News Agency (KCNA).

The Politburo of the Workers’ Party is the highest decision-making body in between plenary sessions of the party’s all-member central committee. Saturday and Sunday marked the first time since April the body met.

The contents of the meeting did not stand out from regular sessions, with Kim expounding on the need to focus on growing the country’s fertilizer production and chemical industry as a whole.

But the meeting did mark a rare occasion in which Kim took part in an official gathering this year, as he has been unusually sparing in his public activities. Since April 11, when he abruptly ceased public appearances for three weeks, fueling international speculation about his whereabouts and health, Kim has only attended four public events.

His remarks at the meeting — focused squarely on economic issues — also stood in stark contrast to a public commentary recently laid out by his sister, Kim Yo-jong, slamming South Korea on the issue of propaganda leaflet distribution across the border.

On Friday, one of the North’s top inter-Korean agencies, the United Front Department (UFD), said Pyongyang would withdraw from a joint liaison office located in the border town of Kaesong on the orders of Kim Yo-jong.

The separation of roles indicates Kim Jong-un may have vested his sister with the authority to conduct inter-Korean affairs, as suggested in the way the UFD statement on Friday referred to Kim Yo-jong as the department’s first vice department director.

The Politburo meeting was also notable for Kim Jong-un's failure to remark on geopolitical issues like military action or summits, topics he frequently comments on after emerging from extended periods of silence.

The elder Kim may be attempting to prop up his public image as the country’s leader focused on the people’s welfare, while delegating the often unsavory task of pressuring foreign powers to his sister.

“Chairman Kim Jong-un may have felt no need to mention anything [on the liaison office] as the North has already begun to act on the matter,” said Chin Hee-gwan, a professor of unification studies at South Korea’s Inje University. “He appears to be focusing on domestic governance and policies benefiting the people, while leaving South Korea relations to his sister Kim Yo-jong, and economic issues to Cabinet Premier Kim Jae-ryong.”

While South Korea was taken aback by the North’s bombshell announcement on the liaison office, the fact that a blood relative — and Kim Jong-un’s closest confidante — is acting as the chargé d’affaires on relations with Seoul suggests inter-Korean relations remains an issue of key importance to Pyongyang.