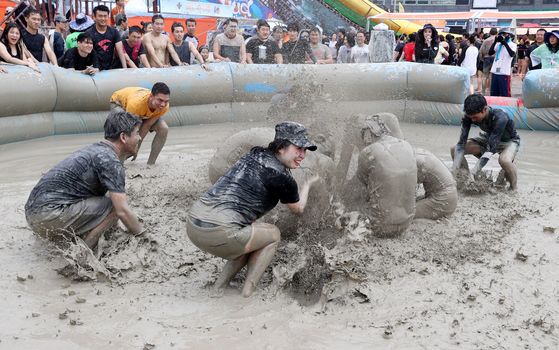 An iconic mud festival held annually in Boryeong, South Chungcheong, will go online this year due to the Covid-19 pandemic, the city announced Monday.

The 23rd Boryeong Mud Festival, which was initially slated to run for 10 days starting July 17, will be replaced with an online festival to feature various mud-themed games and activities, the city said in a statement. The so-called Untact Mud Festival ON will kick off sometime next month or in August.

The final decision not to hold an in-person Boryeong Mud Festival, which in previous years included concerts and participants hurling mud at each other near Daecheon Beach, was reached during a recent board of directors meeting of the Boryeong Festival and Tourism Foundation, the city said.

The Korean central government has strongly recommended canceling or postponing all local festivities and events where participants engage in close physical contact to one another.

The Boryeong Mud Festival is one of Korea’s three largest local festivals, attracting several millions of people every year, including many foreigners.

Boryeong Mayor Kim Dong-il said in a statement Monday that the city had no other choice but to hold this year’s festival online due to fears of Covid-19 transmission, adding that he and the city would do their best to come up with fun, educational programs for participants in the Untact Mud Festival ON.

This isn’t the first time that the province of South Chungcheong scrapped plans for a major festival this year.

Late last month, organizers of the Gyeryong World Military Culture Expo announced that the festival will be postponed for a year due to fear of the coronavirus. The exhibition, initially scheduled to take place in September in Gyeryong, South Chungcheong, was expected to attract 1.3 million visitors from all over the world, including veterans of the Korean War (1950-53), soldiers and military officials.

Get your mud on