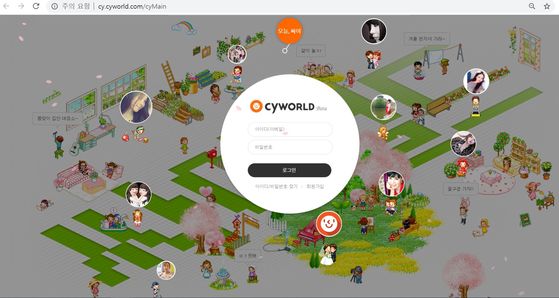 
Cyworld, once Korea's most popular social network and one of the first in the world, is finally reaching the end of its long life after failing to keep up with newer services like Facebook and Instagram.

The National Tax Service revoked the Seoul-based company’s business registration last month after it constantly failed to pay withheld tax. On the tax agency’s website, the company has been shown as closed since May 26.

Its website has been unstable since then, with many of its remaining loyal users struggling to log in to the service.

Apparently acknowledging the impact of Cyworld’s potential closure, the Ministry of Science and ICT stepped in to inspect the state of business operations. The company hasn’t officially reported that it has shut down to the ICT Ministry.

Jun Je-wan, CEO of Cyworld, maintains that the social network isn't finished yet, vowing to raise capital from investors to revive the platform.

But that is not going to be an easy task given the difficult financial state of the company and its inability to come up with a strategy to compete in the market.

Even paying for server maintenance posed a challenged to Cyworld, as it was forced to temporarily shut down the site last year after it failed to pay its maintenance bill.

Telecom company KT supports Cyworld’s server and the ICT Ministry pleaded with KT to keep providing server management despite the outstanding bills, according to an anonymous source at the telecom unit.

“Cyworld managers and officials are not reachable currently, and we don’t really know what is going on [with Cyworld],” the source said.


The king of social networking

A group of graduate students from KAIST, a prestigious research university, launched the platform in 1999. It quickly gained popularity with its virtual living room, called a minihompy — equivalent to Facebook’s Timeline — for each user.

Back then, Cyworld was a true pioneer — it is generally recognized as the world's first mass social network.

Its main cash stream came from Cyworld’s virtual money, called dotori (Korean for acorn), which allowed for the purchase of music and decorative items.

The site was so successful that SK Communications, an affiliate of SK, acquired the unit in 2003.


By 2010, users had started leaving en masse. Kakao's Kakao Story was gaining popularity, and the international success of Facebook and Twitter loomed on the horizon.

Not only did those platforms allow for networking with overseas friends, but they didn’t require additional payment to decorate users’ own space — factors that industry insiders see as reducing the appeal of Cyworld.


A premature attempt at expansion outside of Korea and a belated move to go mobile accelerated Cyworld's decline.

Still, it has tried to turn things around.

He attempted to transform the platform into a customized news content provider, although the service, dubbed Que, failed to take off.

Back in 2017, there was a glimmer of hope. Samsung’s start-up investment arm Samsung Venture Investment invested roughly 5 billion won ($4 million) in Cyworld in 2017, providing a much-needed cash injection.


But by then it was too little, too late. Most of the accounts left on the site are now inactive after Korea users embraced Facebook and Instagram.