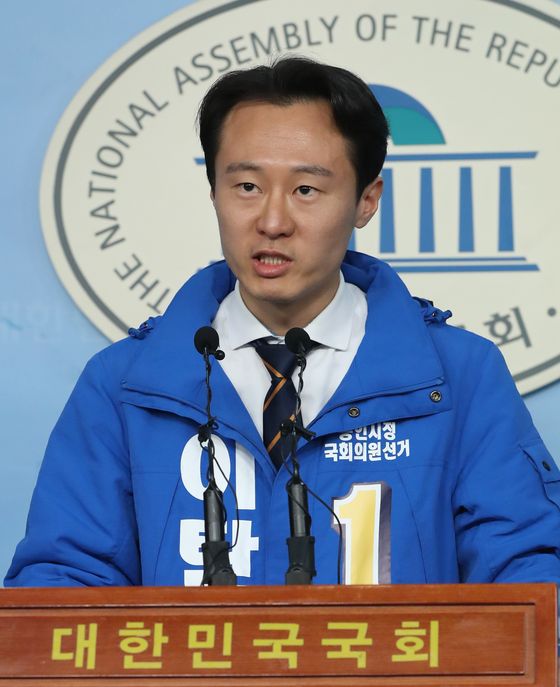 Lee Tahney announces his bid for the April 15 general elections on March 12. [YONHAP]

The National Assembly has sent back a ruling party lawmaker’s application for a medical leave to restore his mental health, as the law governing the legislature has no clause to allow such time off.

Rep. Lee Tahney, a first-term lawmaker of the Democratic Party (DP) and former judge, posted a message on his Facebook on Saturday that he wanted to take medical leave to treat his panic disorder.

He stated that he developed a panic disorder in February 2017 after resigning from the judiciary in protest of alleged abuse of power by Supreme Court Chief Justice Yang Sung-tae. Lee, who was then serving as the deputy director-general of the National Court Administration, particularly opposed the judiciary’s operation of a blacklist of judges based on their political persuasions.

Lee said he had since recovered from the disorder, but relapsed in late March this year when the election campaign heated up.

“I decided to make an honest confession to the people about the condition of my body and mind, because it is a responsibility of an elected public official,” Lee wrote. He said he wants to take time off and concentrate on medical treatments before returning to the legislature.

According to local news media, Lee submitted an application to take a 60-day medical leave to the National Assembly speaker, after consulting with the DP leadership. The application, however, was turned down on the basis of there being no legal grounds to accept it.

The current National Assembly Act says only that a lawmaker, when not attending a voting session, is required to submit a report in advance or afterward about the absence. There is no clause governing a long-term leave of absence.

According to Lee’s office, the lawmaker submitted a report to the legislature stating that he won’t attend the voting session on Tuesday and skipped the meeting.

Lee, 41, passed the bar exam in 2002 and served as a judge of Suwon District Court beginning in 2008. He served on multiple local and high courts before leaving the judiciary in 2017. He entered politics in January, after the DP recruited him as a star candidate to promote judicial reform. He was nominated to Yongin D district and won in the April 15 general elections.