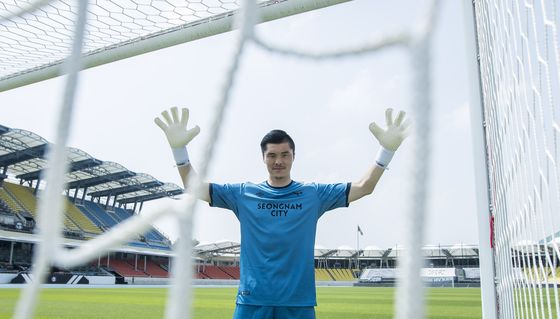 Seongnam FC goalkeeper Kim Young-kwang poses for a photo ahead of his 500th career match in the K League at Tancheon Sports Complex in Seongnam, Gyeonggi, on June 4. [KIM SUNG-RYONG]

Seongnam FC lost 1-2 against Daegu FC at Tancheon Sports Complex in Seongnam on Sunday, but the home team still left the field with something to celebrate when the referee blew the whistle.

Appearing in front of the net against Daegu, Seongnam goalkeeper Kim Young-kwang earned his spot in the history books. Kim is one of just a handful of players to have appeared in 500 K League matches.

“It would’ve been good if we won,” Kim, who appeared in the game wearing a shirt with "500" printed on the back, said. “But I’m still happy because it’s not an easy record to set.”

Although the focus was on Kim's achievement, the loss was significant for Seongnam as it was the first time the team has failed to pick up points this season. Throughout five matches as of Tuesday, Seongnam has a record of two wins, two draws and a loss, totaling eight points. This is good enough for fourth place.

“Even [Kim] Byung-ji, who I highly respect, gave away four goals in his 500th match,” Kim said. “I’m not depressed about losing because I gave up [two] goals. I got congratulatory messages from the top Korean goalkeepers like [Kwoun] Sun-tae [of Japanese club Kashima Antlers] and [Jung] Sung-ryong [of Japanese club Kawasaki Frontale]. Even people that I normally don’t talk to messaged me.”

After joining the Jeonnam Dragons in 2002, Kim has passed through a number of KBO clubs, never giving up his spot in the starting lineup. Back in 2012, when Kim played for Ulsan Hyundai FC, he helped the club win the Asian Football Confederation (AFC) Champions League title. Then at the 2004 Summer Olympics in Athens, Kim helped Korea advance to the quarterfinals as well as getting to experience the FIFA World Cup twice in 2006 and 2010. 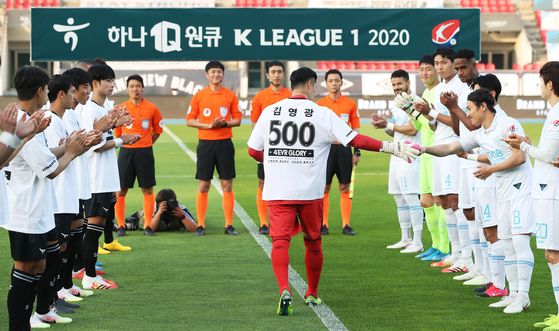 Goalkeeper Kim Youg-kwang, center, walks up to the pitch as both Seongnam FC and Daegu FC congratulate his achievement at Tancheon Sports Complex on June 7. [YONHAP]

Kim credits his 19-year career at the top of the game to hard work.

“As a former member of Korea’s national youth team, I was filled with confidence when I decided to turn pro,” Kim said. “But on the first day of team training, my confidence fell apart. After trying to block Roh Sang-rae’s shot, I just came to my senses. It was too quick that I couldn’t block it at all.”

Standing at 1.83 meters (6 feet), Kim is not especially tall for a goalkeeper, so the only way for him to survive in the professional league was to improve on his jumps. As he was competing against goalkeepers who were about 1.90 meters tall, Kim had to run more and jump higher. To do so, Kim trained four to five hours every night to improve on his reactions.

At 36, Kim is a veteran in the K League, but he still hasn’t missed a single individual training session. With the help of Seongnam’s goalkeeping coach, Kim had been working on improving his visual focus, which has gotten worse compared to when he was in his 20s. Even if the football is coming right at his face, Kim tries not to blink.

Along with personal training, when it comes to self-conditioning, Kim has been on top of his game.

“I weighed 86 kilograms (190 pounds) when I made my pro debut, and I’m still maintaining it at 86 to 87 kilograms,” Kim said. “If I think I ate a lot, then the next day, I eat a lot less. When I see younger players eating ramyeon at night, there are times that I want some too, but I turn my back on it by telling myself that each bag of ramyeon is a goal.”

Despite joining the K League in 2002, Kim only joined Seongnam this year. After failing to re-sign with Seoul E-Land at the end of last season, Kim was on the verge of retiring.

However, it was his former teammate Kim Nam-il, who now manages Seongnam, who reached out to him. As head coach, Kim Nam-il considered Kim Young-kwang the last puzzle piece to compete his team.

With the two Kims back together, now as head coach and player, they are hoping to bring Seongnam back to the top. In 2019 , Seongnam finished ninth  of 12 clubs in the K League 1. Along with the K League, they faced an early exit in the FA Cup. This was quite a disappointment as they have previously won the FA Cup three times and have won the K League title seven times in the club’s history.


So far, Kim has paid back the Seongnam head coach’s trust as he’s played full-time in all five matches this season and only allowed one loss.

To remember where and how he started, Kim chose the jersey number 41, which was the number he used back when he was a rookie, when he joined Seongnam this season.

“Every goalkeeper dreams of becoming a ‘superman’ by blocking every single shot,” Kim said. “At 37 [Korean age,] that dream applies to me too.”

Seongnam will continue their 2020 season with a match against the second-ranked Ulsan at Ulsan Munsu Football Stadium on June 13. The match will kick off at 4:30 p.m.