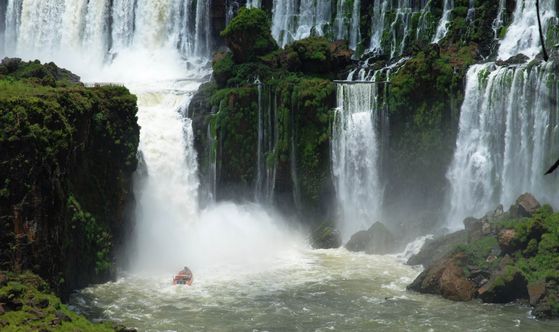 A boat approaches the falls of the Iguazu National Park in Argentina. [EMBASSY OF ARGENTINA IN KOREA]

The massive waterfall is just one wonder Argentina has to offer 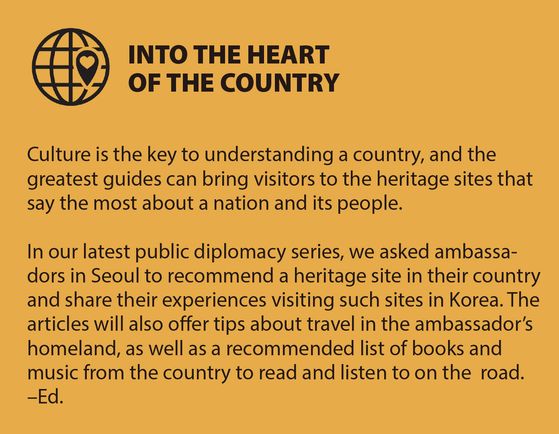 A boat ride directly under the widest waterfall in the world — so wide that it straddles two nations — might be worth putting onto your bucket list.

“It’s called la garganta del diablo, or the devil’s throat,” said Ambassador of Argentina to Korea Alfredo Carlos Bascou. “It’s a point where you see massive waterfalls around you dropping some 80 meters [260 feet] in cataracts.”

The Iguazu National Park in Argentina, alongside its sister park in Brazil, boasts the widest waterfall in the world, with the cascades stretching nearly three kilometers on the border of the two countries. It was inscribed on Unesco’s World Heritage List in 1984 for its “visually and acoustically most stunning natural sites.”

One of the best ways to see the waterfall, Bascou said, is to take a path that leads visitors just a few steps from the devil’s throat, or to take a boat under the falls.

“The boat ride is a brave decision,” said Bascou. “The closer you get to the waterfalls, the sound of the water blocks out everything else. It’ll be just you and the falls.” 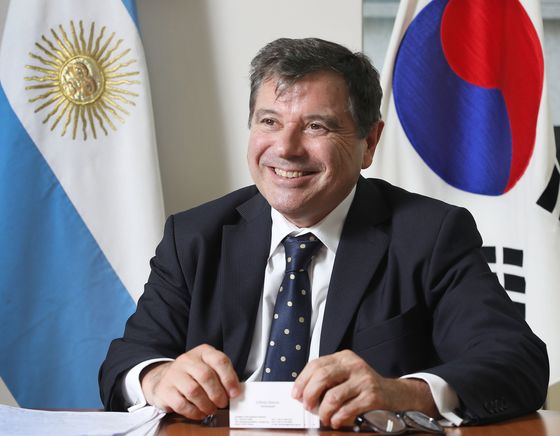 Ambassador of Argentina to Korea, Alfredo Carlos Bascou, in the interview with the Korea JoongAng Daily at the office in central Seoul last month. [PARK SANG-MOON]

Argentina, battling the Covid-19 pandemic like the rest of the world, has closed its borders. But if all goes well, the country may reopen in time for its spring season, which begins in September, one of the best times to visit the park, an ecological paradise with around 2,000 plant species, 400 bird species and 80 mammals, including jaguars, howler monkeys, ocelots and tapirs.

The ambassador sat down with the Korea JoongAng Daily last month to share his best tips on visiting the heritage site in Argentina, as well as other pit stops to make in the country, from its wine vineyards in Mendoza and blue glaciers of Perito Moreno, to its bookstore capital Buenos Aires and the ruins of Jesuits in Misiones.


How did you come to choose the Iguazu National Park to introduce as the heritage site of Argentina?
Argentina is home to many heritage sites, but the waterfalls of Iguazu is both a Unesco heritage site and one of the seven wonders of the world. You will see why when you visit, it is the maximum expression of nature. The waterfall is the widest in the world and there are different points at the park to enjoy it. You can take a path that will take you just steps away from the devil’s throat, or a boat ride that will take you just below the falls. For a different experience, take the train that goes through the national park that surrounds the waterfalls — on the ride, you will come across thousands of species of plants and animals. If you want to meet nature at a slower pace, take one of the trails in the park. Sometimes it will be just you, the trail and the birds of so many colors in the trees. It will be special. 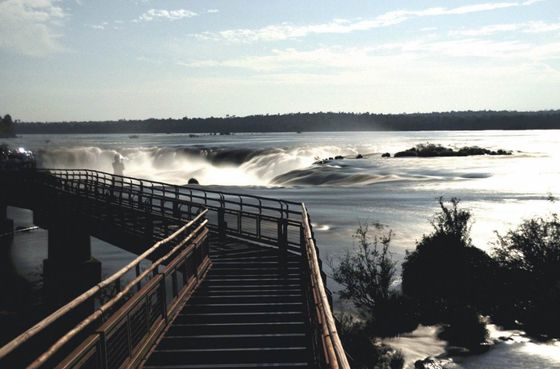 A walkway in Iguazu National Park. [EMBASSY OF ARGENTINA IN KOREA]


Argentina is one of the top-10 largest countries in the world and home to over 10 Unesco world heritage sites. Where else do you recommend visitors check out during their stay in the country?
Within the same province of the national park is the San Ignacio Mini, or the ruins of Jesuit missions that date back to the 17th century, also a Unesco heritage site.
Perito Moreno Glacier will also be worth your visit. It is a moving glacier and visitors from all over the world come to see the ice bridge breaking off the glacier every four to five years, although now that time period has been shortened due to global warming.
There is also the Península Valdés, a Unesco heritage site and home to the endangered southern white whale.
In the northwest region of the country you can see mountains that, because of the minerals, sparkle in different colors when the sun reflects off them. It is a unique spectacle, an art work by nature.
Then there is the Province of Mendoza, where you have the vineyards. Wine tours are easy to find there.

Since visitors are likely to spend a few hours on the road during their stay in Argentina, do you have recommendations on books they should read, or music to listen to, while traveling?
Definitely pick up the epic poem “Martín Fierro” by José Hernández, that tells the history of cowboys in Argentina. I also like “Civilización y Barbarie” by Domingo Faustino Sarmiento. He was the president of Argentina who ensured people’s basic access to education. I would also recommend “Sovrieroe e Tumbas (On Heroes and Tombs)” by Ernesto Sabato. The book is about dictatorships in Argentina. By the way, Buenos Aires is the city with most the theaters and libraries in the world, and you will see people with paperbacks in their hands in the city.
In music, we have the tango, the national rock genre starting in the 1970s, and folk music dating back to the colonial period. Most recently we developed another genre of music called Cumbia. It’s very popular these days. Look up the group Agapornis. The music is very tropical, quite the opposite from the vibes you get from tango.

Does the embassy have regular programs for Koreans to enjoy Argentinian culture in Seoul?
We have a tango academy open at the embassy twice a week. However, that’s been put on hold since February due to the Covid-19 outbreak. But we have had some 40 students so far and they love it. Anyone can join. All that is required is that you want to start dancing tango.
We have also been hosting movie screenings once a month. Argentina is home to two Oscars winners. We were very happy to see Korea’s “Parasite” (2019) win at the Oscars. If you’re looking for a movie to watch over the weekend, we recommend Oscar-winning “The Official Story” (1985) or “The Secret in Their Eyes” (2009). Both are related to the period of dictatorships. As dark as the topic is, the second one will make you laugh.

Has there been more information-sharing about Covid-19 between Argentina and Korea lately?
We sent samples of test kits from Korea to Argentina. We have scheduled video conferences between hospitals in Korea and in Argentina, including H Plus Yangji Hospital in Seoul, to assist with information sharing regarding Covid-19.
There are different areas where we believe Korea has done a stunning job. And we want to learn. I have calls coming in from Argentina, asking if I am working from home. I tell them, no, here we have an almost normal life. People are still able to go about their everyday activities without a nationwide lockdown. That’s rare in many parts of the world these days. But then, we are speaking of Korean society and its people, a very disciplined and ordered society, in my opinion. 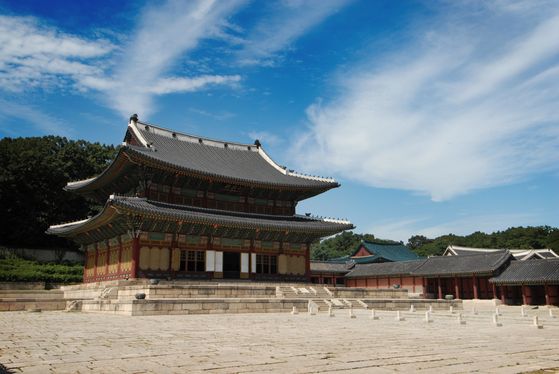 
What is the next Korean heritage site that you would like to visit?
Changdeok Palace is definitely on my list. Palaces in Korea provide an interesting look into the country’s changing cultures – for instance you see the letters on palace gates written in Chinese and you wonder when Korea used Chinese in written language and when Korean started being used. Heritage sites are great in that sense.

What areas of bilateral ties do you plan to focus on?
We are hoping to work more together with Korea on start-ups, artificial intelligence and the agro industry. We have been working closely together on biotechnology as well. Argentina has been exporting vaccines for foot and mouth disease to Korea since three years ago.
One difficulty we are having is exporting Argentinian beef to Korea. Argentinian cows are all 80 percent to 100 percent grass-fed. We export only the 100 percent ones. Korea’s doors to our beef have not opened yet.

How do you wish Koreans would remember Argentina by the time your tenure here concludes?
I would like the people of Korea to see Argentina as a reliable partner. The country is a land of opportunities and there is a lot we can do together. Our history of friendship dates back to 1962. In the 1970s, we had a large number of Koreans immigrate to the country — up to 60,000. Today there are around 30,000 in the country still, and you should see the way we celebrate together in Buenos Aires every year in November. We have designated one day as the Day of Korean Culture, and in the Korean town of the city, we close down the avenues, some eight blocks in all, and have hundreds of booths selling Korean food, like bindaeduk (mung bean pancakes). Last year it drew a crowd of some 120,000 people, I remember when I got there, the streets were packed from one end to another and the mood, simply festive. 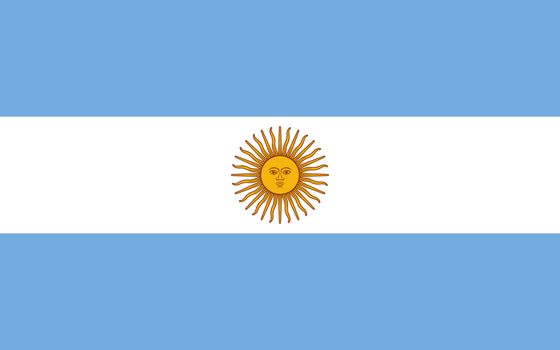 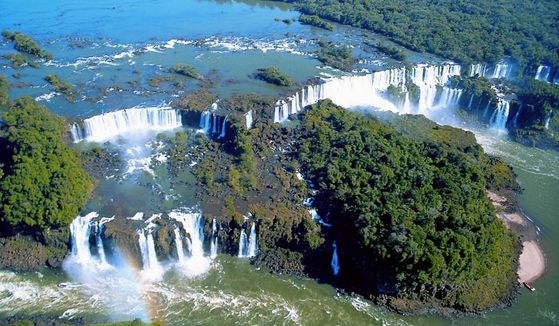 An aerial view of the Iguazu National Park. [EMBASSY OF ARGENTINA IN KOREA]

• Best time to visit: All seasons but avoid summer (December to February) if you are not in the mood for humidity.

• Recommended flight routes from Korea: Take a flight to Buenos Aires, then a local flight to Puerto Iguazu, or a bus, but this can take some 15 hours.

• Books to read before the trip: “Martín Fierro” by José Hernández; “Civilización y Barbarie” by Domingo Faustino Sarmiento; “Sovrieroe e Tumbas (On Heroes and Tombs)” by Ernesto Sabato; “The Aleph and Other Stories” by Jorge Luis Borges; “Santa Evita” by Tomás Eloy Martínez; and “Don Segundo Sombra” by Ricardo Güiraldes.

Argentina Iguazu falls Into the Heart of the Country Unesco Travel