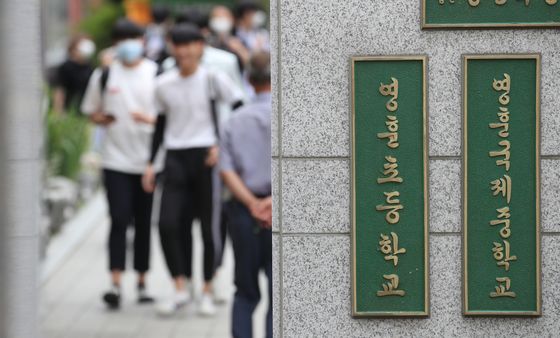 The Seoul Metropolitan Office of Education announced Wednesday that it was recommending the revocation of special status for two international middle schools, criticizing them for educational elitism.

The two schools were designated international middle schools in 2009 but became to be known as “schools for the elite,” with high annual tuitions of over 10 million won ($8,400) and very low ratios of actual international students.

The office said that Young Hoon and Daewon scored less than 70 points out of 100 in the latest evaluation. Evaluations for special status of schools take place every five years.

The education office this year raised the passing threshold from 60 points to 70.

Seoul Metropolitan Education Office Superintendent Cho Hee-yeon said in a briefing, “We decided to take steps to cancel the designation of Daewon and Young Hoon as specialized middle schools after determining that the two schools have not achieved their original purposes.”

He said, “The schools are damaging the essential values of compulsory middle school education, which should guarantee all students equal educational opportunities and strengthen public education.”

Cho added, “The international middle schools, unlike their original goal, are encouraging stratification of schools and private education.”

The Education Ministry last November announced a plan in which autonomous, foreign language and international high schools will be deprived of special status that grants them greater autonomy in admission, financing and curriculum and be converted into regular schools by 2025.

The ministry said it wanted to create a more equal education system and improve the overall quality of public education while discouraging costly private education.

President Moon Jae-in in a campaign pledge in 2017 said he would end elitism in the school system.

Since 2014, superintendent Cho has been a strong proponent of converting specialized schools into regular schools.

However, Cho stressed Wednesday that the decision to revoke the special status of the two international middle schools is “based on a fair and objective evaluation of their management over the past five years.”

International schools allow anyone who can pay the tuition to enroll, in contrast to foreign language schools which require students to be non-Korean or to have at least one foreign parent, though these schools allow up to 30 percent of students with both parents of Korean citizenship if they spent at least three years abroad.

Autonomous high schools likewise maintain financial independence from the government and, in return, are granted more freedom in picking students, creating their curriculum and charging tuition.

The Seoul education office will allow a period of time for Daewon and Young Hoon to explain their circumstances.

Ultimately, the Education Ministry will make a final decision on whether to revoke the special status of the two schools.

If the status is revoked, they will have to be converted to regular schools by next year. However, students currently enrolled will retain their status as international middle school students.

But if the international schools file a lawsuit over the cancellation of their special status, the conversion to regular schools could be delayed. Some special autonomous high schools that had their status revoked last year sued to buy more time.