Self-employed are back, at least 97 percent back

Self-employed are back, at least 97 percent back 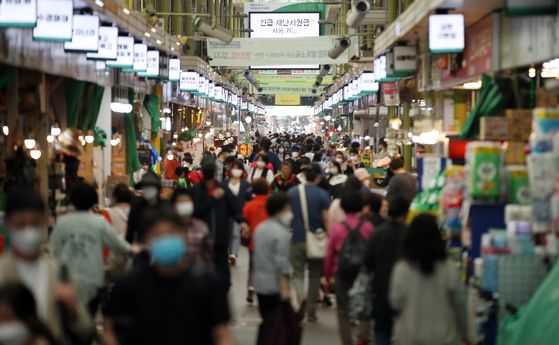 Mangwon Market, the neighborhood's traditional market in Mapo District, western Seoul, is crowded on May 26. [YONHAP]

The easing of social distancing and the disbursement of emergency disaster relief funds may have had an effect. According to a recent report, sales by self-employed businesses, which had been suffering during the Covid-19 outbreak, are getting back to pre-outbreak levels.

Some notable exceptions exist. Based on an analysis of credit card sales at 425 neighborhoods in Seoul collected by Korea Credit Data, which manages payment information for some 660,000 small businesses nationwide, sales in tourist commercial districts, university areas, transportation hubs and areas frequented by the elderly still remain sluggish.

According to the report, sales in the last week of May at small businesses in Seoul were 97 percent compared to the same period last year. In other words, if an average store sold 100 units last year, it sold 97 units this year. Sales were down in February, though the decline in sales eased from March, when the spread of Covid-19 slowed, and steeply recovered from May holidays following the disbursement of emergency disaster relief funds.

Neighborhood business districts recovered the most. Sales in Jeungsan-dong in Eunpyeong District, northern Seoul; Jangwi-dong and Seokgwan-dong in Seongbuk District, central Seoul; Yeomchang-dong in Gangseo District, western Seoul; Gaepo-dong in Gangnam District and Garak-dong and Macheon-dong in Songpa District, all southern Seoul, increased by more than 20 percent on year.

"The increase in sales is mostly seen in 'bed towns' where large apartment complexes and residential areas are concentrated,” Kim Dong-ho, CEO of Korea Credit Data, said. “Consumers used local stores closer to home rather than large commercial districts where many people gather.”


A total of 29 neighborhoods have not recovered 90 percent of last year's sales.

Eleven neighborhoods around university campuses were severely hit, including Cheongpa-dong 2-ga (Sookmyung Women's University), Seogyo-dong (Hongik University), and Hwayang-dong (Konkuk University), which recorded 61 percent of sales in the same period last year. With the cancellation and postponement of the spring semester, these commercial districts faced a dramatic decrease in sales. The businesses are still struggling, with various school events and meetings canceled. 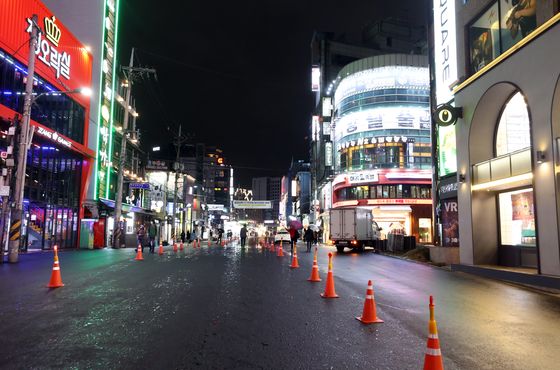 Seogyo-dong near Hongik University, which is usually crowded at night, is empty on a Friday night. [YONHAP]

"Considering the upcoming summer break, which has always been an off-season in university areas, more than half of the year's business is ruined," Kim said. "Considering that online lectures will continue until the pandemic situation calms down, sluggish sales around the university districts are expected to continue for a while." 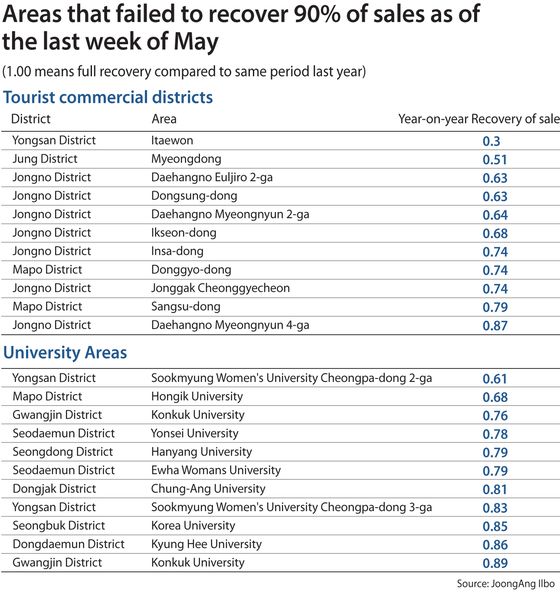 In addition to Myeong-dong, 11 other popular shopping and entertainment neighborhoods, including Insa-dong, a mecca of performance and art Daehangno, Sangsu-dong, Donggyo-dong and Gwangcheol-dong, were also hit. These are areas where many foreigners and young people visit, and are often classified as tourist-commercial districts. As of the last week of May, Itaewon-dong's sales recorded 30 percent of sales a year ago, which is the lowest recorded among 425 neighborhoods in Seoul. The floating population of Itaewon's commercial districts significantly decreased after a Covid-19 patient visited Itaewon clubs and bars.

"The Itaewon area has been affected by the stigmatization effect after a cluster of Covid-19 infections were linked to clubs in the Itaewon area,” Kim said.

Areas near major subway transit stations, such as Yongsan Station and Seoul Station, suffered from the smaller floating population.

Nakwon-dong around Tapgol Park, where people above 60 tend to gather, recorded sluggish sales as seniors stayed home in the fear of Covid-19. Nakwon-dong has a theater dedicated to the silver generation and a live music cafe. Gwancheol-dong, which is close to Tapgol Park, also suffered diminished sales.

The recovery rates in an industry-specific analysis were mixed. As of the last week of May, sales in the furniture and household goods sectors increased 53 percent and 63 percent, respectively. With their free money from disaster relief funds, people spent money on home furnishing as they spent more time at home. The 40 percent increase in the sales of books is also a result of people staying at home more. Sales of health food increased 37 percent and sports products 60 percent.

Although the recovery in sales of self-employed businesses has been confirmed by figures, it is yet too early to say that overall consumption is picking up. Sales through large distribution channels, such as department stores, discount stores and shopping malls, continue to be sluggish, and various consumer indicators are still weak. The social distancing campaign can be strengthened again at any time, and the effect of relief funds has its limit. The Composite Consumer Sentiment Index (CCSI) released by the Bank of Korea was 77.6. in May. The index plunged from 96.9 in February to 70.8 in April. Although it rose 6.8 points last month, consumer sentiment fell far short compared to the long-term average of 100 percent between 2003 and 2019.

"It will take time for domestic consumption to fully recover to the level before the Covid-19 outbreak," Jung Yeon Sung, president of the Korea Marketing Management Association and a business administration professor at Dankook University, said. "The impact of the change in consumption patterns brought by the outbreak is enormous. Some overcrowded industries and overcrowded commercial districts can start on restructuring measures."