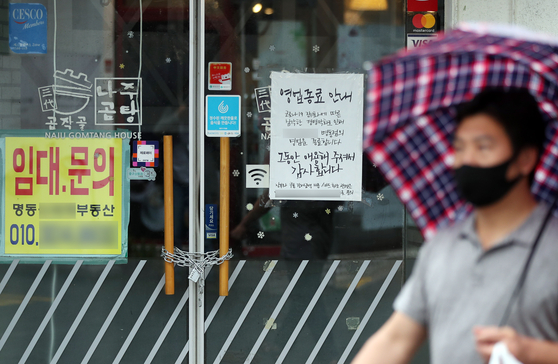 A notice at a restaurant in Myeong-dong, central Seoul, reads it closed as a result of the pandemic, on Oct. 8. [NEWS1]


A small barbecue restaurant in Yongdap-dong, eastern Seoul has racked up 100 million won ($85,000) of debt since the pandemic started.

“Now, the maximum amount I can borrow is around 40 million won. It’s never been this tough in my life,” the 55-year-old owner said. “So many restaurant owners nearby are already out of business."

When asked if situation will improve if the government adopts its “With Corona” strategies, Kim said the policy is not enough to bring things back to normal.

“The prices of major ingredients are too high,” the woman added. “Even if the pandemic ends, it will be impossible to bring the economy back to normal. It’s not just me thinking like this; many restaurant owners feel the same”

Small restaurants owners, stuck between social distancing guidelines and rising prices, are now left with no choice but to shutter their businesses with hundreds of million won of debt.

There were around 5.5 million self-employed in September, down 26,000 from same month last year, according to data by Statistics Korea. It’s first time the ratio of self-employed to the total working population fell below 20 percent since 1998, when the data were first collected.

Many self-employed already gave up. A total of 48,394 people received government subsidies after closing their businesses in the first half, up 17 percent on year.

Increasing prices for meat, fish and other raw materials needed to make the food served is another factor pushing restaurant owners into a corner. 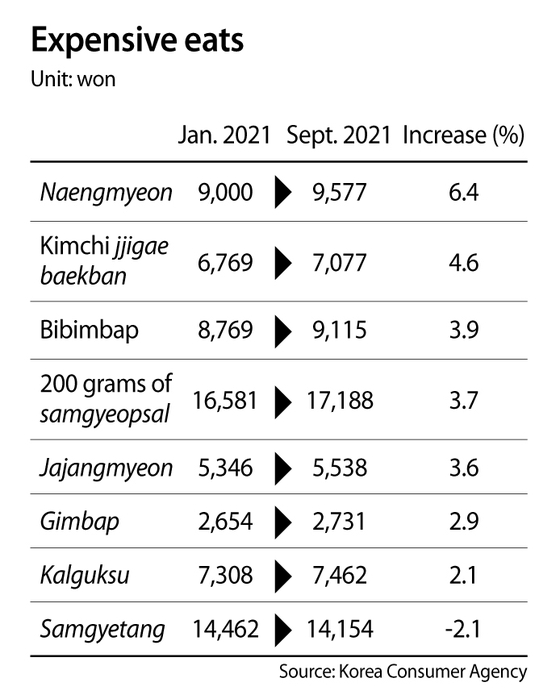 “The price of fishes like fluke and rockfish jumped 250 percent compared to two years ago,” said a 44-year-old man who runs a raw fish restaurant in Yongsan, central Seoul. “I’ve never seen sharp inflation like this in the 10 years I’ve been running the restaurant.”

“Considering the cost of ingredients and commissions for delivery companies, I'm left with nothing. These days, I feel like I’m a volunteer rather than a businessman.”

Consumer prices have increased more than 2 percent on year for the six consecutive months.

According to data from the Korea Consumer Agency, a bowl of naengmyeon (noodles in a cold meat broth), which cost 9,000 won per serving at the beginning of the year was 9,577 won in September.

The price of kimchi jjigae (kimchi stew) baekban rose 4.6 percent to 7,077 won during the same period. Baekban refers to a bowl of rice served with a couple of side dishes and a main dish, such as kimchi jjigae or jaeyuk bokkeum (stir-fried pork in red pepper paste).

Restaurant owners argue that the government should ease distancing guidelines for gatherings and allow the self-employed to extend the opening hours.

“There’s nothing more small restaurant owners can do at this point since they’ve been struggling due to the tightened guidelines since last year as well as the skyrocketing prices of ingredients,” said Son Mu-ho from the Korea Foodservice Industry Association. “The government should allow them to earn money, not just cover up the situation with temporary cash handouts. Extending operating hours is essential for them to survive.”