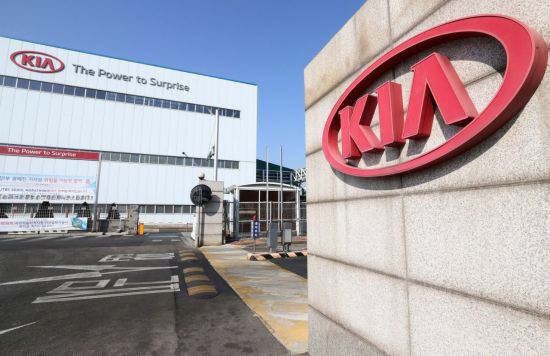 
Kia Motors, Korea's second-biggest carmaker by sales, halted its two domestic plants Thursday, as two workers at the plants near the capital were confirmed to have contracted the new coronavirus.

The suspension came after two workers at the plants in Gwangmyeong, Gyeonggi, tested positive for Covid-19.

Korean health officials tested workers who came into contact with the virus patients. The test results are due as early as Friday morning.

Kia Motors and health officials carried out disinfection work at the two plants, including a fitness center used by a coronavirus patient, in a precautionary move to stem the spread of the virus. Around 6,000 people work at the plant.

The company said it remains unclear how long the suspension will last.

The suspension disrupted production of about 1,300 vehicles, according to Kia Motors.

The No. 1 plant churns out the Carnival minivan, the Stinger sports car and the flagship K9 sedan, while the No. 2 plant produces the Pride compact and the Stonic subcompact sport utility vehicle.

Kia has eight plants in Korea — two in Gwangmyeong, three in Hwaseong, Gyeonggi and three in Gwangju — and seven overseas ones — three in China and one each in the United States, Slovakia, Mexico and India. Their overall capacity is 3.84 million units.