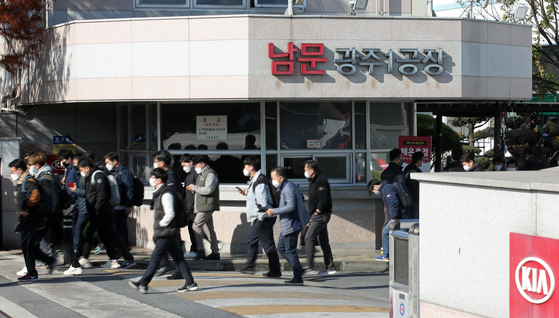 Kia Motors' morning-shift workers at its Gwangju factory leave work at around 11:10 a.m. on Nov. 25 as they went on a partial walkout where they worked for four hours per day out of their regular eight-hour shift. [YONHAP]


Kia Motors and its unionized workers tentatively agreed on a wage deal Tuesday after a monthlong partial walkout.

The management and unionized workers agreed on a base wage freeze and a one-off bonus payment worth 150 percent of monthly salary, as well as a 1.2-million-won ($1,100) special allowance in relation to Covid-19.

This is the first time since 2009 that Kia Motors has agreed to a base wage freeze.

“The latest tentative deal derives from an understanding that the management and the union need to settle in order to be prepared for the future mobility business and lead the change in the automotive industry amid the third wave of the Covid-19 pandemic,” the company said in a statement Tuesday.

The two sides have been at odds over reintroducing paid overtime. The union has strongly insisted that workers should be allowed 30 minutes of paid overtime a day, for which they get paid time-and-a-half. The company removed the 30 minutes overtime in 2017.

“Bringing back the paid overtime system has been agreed upon under the condition that [workers] enhance their productivity,” the company said.

Kia Motors’ unionized workers have also been demanding a pay raise, including a 120,000 won increase in their monthly base wage and incentive payments worth 30 percent of the previous year’s operating profit.

The management didn’t accept the request, citing deteriorating sales amid the pandemic.

Kia Motors has sold 2.39 million vehicles this year as of November, 6.1 percent less than the same period last year.

The union has been staging a partial walkout since Nov. 25, disrupting production of some 47,000 units.


Hyundai Motor’s unionized workers also accepted 150 percent of their monthly salary as a one-off bonus and a 1.2-million-won allowance in relations to the Covid-19.

The tentative deal will put to a vote by the Kia Motors union on Friday.