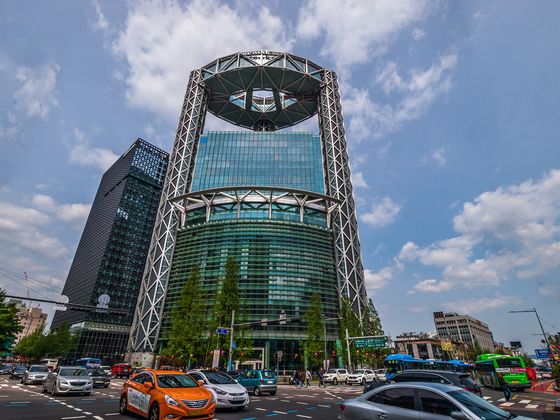 
When U.S. co-working space provider WeWork took over the lease of a landmark building in Yeouido, a financial hub in western Seoul, from Hewlett-Packard two years ago, the move seemed more significant than just a change of tenant.

WeWork was seen as the face of the game-changing industrial shift as "unicorn" start-ups seemed to overshadow traditionally dominant IT firms like Hewlett-Packard.

Things have changed a lot over the last two years. Facing significant domestic competition and a smaller market than anticipated, WeWork was recently forced to request a review of its 10-year lease contract with the landlord of its space in central Seoul's Jongno Tower due to a low rate of occupancy.

While the New York-based company struggles, homegrown co-working companies like Fastfive have worked to undercut its position in the market, primarily by charging lower fees.

The uncertainty over the Jongno Tower office reflects broader issues at WeWork. Many of its recent woes can be traced back to its botched attempt to go public last year. The paperwork submitted for the planned initial public offering revealed its shaky financial status and questionable corporate governance, causing its valuation to plummet to $2.9 billion from an eye-watering $47 billion.

SoftBank, WeWork's largest outside investor, rushed to bail it out by pumping in billions of dollars, installing CEO Sandeep Mathrani to replace founder Adam Neumann.

The new management is seeking to negotiate rent relief or change the terms and conditions of contracts in some locations across the globe in an effort to improve the profitability of the loss-making company.

“Rather than implementing a company-wide policy, we are individually reaching out to our more than 600 global landlord partners to work in good faith toward finding asset-specific solutions that benefit all parties involved,” a spokesperson from WeWork Korea said.

But the spokesperson denied reports that it is either exiting or paring down its Korean operations.

“WeWork is committed to our business in Korea and is dedicated to provide our space and services to our members in Korea. All of our locations in Korea are fully operational,” she said.

Still, KB Asset Management, the landlord of the eight floors of Jongno Tower used by WeWork Korea, said that it received the tenant’s notice to terminate the lease contract signed in 2018 and turned down the request.

“We got a letter from WeWork in April saying it wants to cancel the lease contract,” said a spokesperson at KB Asset Management, who requested anonymity citing the sensitivity of the issue.

“We rejected the offer because it is in breach of the tenancy contract,” the spokesperson said.

Asked whether the two parties have entered a renegotiation afterward, the spokesperson declined to answer. Industry sources that asked to remain anonymous due to the sensitivity of the issue have confirmed that WeWork is seeking to renegotiate the contract to enhance its profitability.

WeWork has given up two spaces in Hong Kong's Causeway Bay and Tsim Sha Tsui neighborhoods in the last month.

Since its inception in 2016, the Korean branch of WeWork has rapidly expanded into a major co-working office provider, running 20 spaces in Seoul and Busan.

Of the 20 locations, 12 are located in the wealthy Gangnam area.

The growth goes hand-in-hand with the growing number of WeWork locations globally, at more than 750, a rapid rate of expansion given that the U.S. company has only existed since 2010. It entered Korea in 2016.

The firm rents out work space — ranging from shared work areas to dedicated private offices — and amenities, catering to its members including start-up workers, freelancers and those who work remotely for larger companies.

Beside the office space, the major appeal of WeWork lies in the ‘WeWork community’ that allow for natural gatherings and meet-ups among promising enterprises.

But the Korean market is not an easy place to stand out with so many co-working space providers setting out to serve a relatively small number of small enterprises with enough money to pay the rent.

Local workspace providers like Fastfive and SPARKPLUS are on track to increase their number of locations in a fierce race to grab as much of the market as possible. Also competing is financial institutions like Hyundai Card offering a shared workspace.

“The starting price at WeWork is around 700,000 won ($580) [for a dedicated private office], but local providers charge around 400,000 won,” said a source from a public relations agency with business relationships with multiple Korean start-ups.


“So, many of my corporate clients have moved into spaces offered by domestic companies after staying with WeWork for a short period,” she said.

The source said that WeWork also has heavier penalties for ending a contract before the set date.

Of the local operators, Fastfive is considered the top player, with 25 locations and 17,000 members.

Founded in 2015, it aims to carve out its own niche to avoid being considered as a mere follower of WeWork.

“We are adding our own services not seen in other co-working spaces such as a kindergarten exclusively available for our member companies,” said Seo Han-sol, lead of corporate branding & communication at Fastfive.

The kindergarten in Yeoksam-dong, southern Seoul, is the first childcare center operated by a co-working space provider.

SPARKPLUS has increased its market share with competitive price options and customized offerings.

Both companies said that their average vacancy rate is below 3 percent. WeWork Korea declined to reveal the rate, citing company policy.

Still, it is an open-ended question whether the newer players can beat the well-established WeWork brand.

A member using the Jongno Tower space said that WeWork is superior in global networking, adding that she intends to keep using the company.

“If you often go back and forth between different countries or locations in Korea, you can use different WeWork spaces there, which is a great advantage for workers like me who often travel around cities and countries,” the member said.

WeWork Korea said that the number of members has actually increased after the coronavirus outbreak as it preemptively moved to minimize exposure to the pandemic by spacing out desks and having sanitizer readily available.

“Compared to June of last year, we saw an increase of members by 21 percent at [the beginning of] June 2020,” the WeWork Korea spokesperson said.

“And even when we compare the statistics from February this year when Covid-19 began to emerge, to June, we still saw an approximate increase of 7 percent, which goes against common perceptions.”