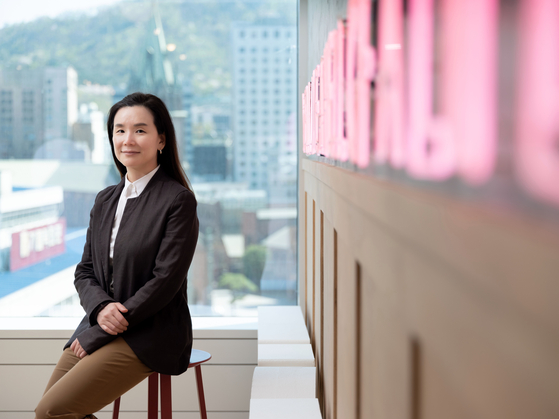 
After a difficult year globally, WeWork's focus in Korea will be on increasing the level of localization.

The global coworking pioneer experienced a rapid downfall in 2019 with a failed IPO that exposed founder Adam Neumann's lavish lifestyle and management problems.

In Korea, the company is facing tough competition from domestic players like Fastfive and Sparkplus, which have caught up or even outpaced WeWork in terms of the number of branches.

WeWork's General Manager Chun Chung-joo, or Patricia Chun, admitted that in its early days, most policies offered at WeWork in Korea were decided top-down from the U.S. headquarters which prioritized applying "global standards" in all markets.

Chun was appointed to head the Korean unit in April 2020.

"The pricing and the scope of services offered — they were all decided without serious deliberation on localizing," she said during an interview with local reporters in central Seoul, Tuesday. "But today, when it comes to pricing, we thoroughly check to see whether it's fit for the local market. There's also a lot of services we're developing to newly adopt in Korea."

For example, WeWork clients are offered a wide range of services from office software and logistics to accounting. Chun said the company is planning to allow corporate clients to purchase multiple services as a bundle at a discounted price, and Korea may be the first market to get this feature.

As Korean office workers work later into the night, WeWork is also preparing to offer heating, ventilation and air conditioning around the clock in domestic branches, possibly as early as next month.

Among existing WeWork services that will be newly introduced in Korea this year are the "All Access" pass that allows clients to use WeWork offices in different countries without an additional charge, and the On-demand app, through which individuals can reserve space on a daily basis.

At the same time, WeWork in Korea also faces the task of meeting high standards when it comes to office infrastructure, as that's what still makes the brand attractive for global firms like Amazon seeking a base in the country. That includes issues like security, IT infrastructure and whether the office is equipped with a toilet for workers with physical disabilities.

"If you look at major global companies, you never hear them using shared offices operated by domestic companies — these are clients that look for more than a pretty space or a sturdy desk, but the overall infrastructure in the office environment," said Chun. "In terms of providing that premium-level service, I think WeWork still takes up an irreplaceable position in the local competition."

Maintaining that high-level standard in service and space is important for WeWork as the company still has higher pricing compared to local rivals.

The Korean unit saw revenue grow 20 percent on year in 2020, says Chun, even as the company's business in markets like the United States and Britain greatly suffered due to the Covid-19 pandemic.

On a global level, WeWork is still going through a difficult time. After 10 years of business, the company remains in the red: WeWork saw $3.2 billion in losses last year, according to the Financial Times. But even as its office occupancy rate fell below 50 percent by late 2020, the company managed to narrow down the losses compared to $3.5 billion in 2019.

Chun said she feels the direction shift as top management are driven by profitability, compared to old days when the focus was purely on growth.

"I think back then, WeWork's center of attention was proving that this new business called office sharing can work and in that fixation for growth, detailed discussions on profitability was somewhat overlooked," she said.

"Now we know there is a market and we have data from our past experience. That will be our new stepping stone for growth."

WeWork's goal is to realize a turnaround in profits globally by the fourth quarter of this year. According to Chun, WeWork will not expand its branches in Korea for the time being. The company currently runs 18 branches in Seoul and two in Busan.