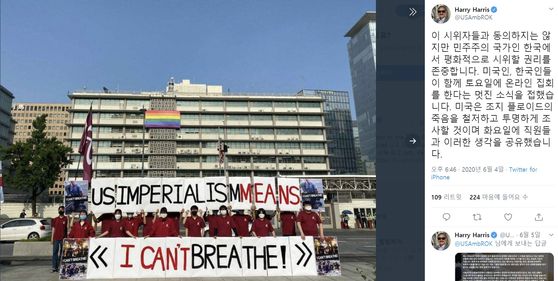 A screenshot of U.S. Ambassador Harry Harris’ Twitter post on June 4 with a photo of an anti-American rally held in front of the U.S. Embassy in central Seoul. [SCREEN CAPTURE]

The U.S. Embassy in Seoul last week asked local police if there was any way to block rallies held under the guise of press conferences in front of the embassy, according to a police source.

The People's Democracy Party, a Korean progressive group, has held anti-American rallies in front of the embassy in Gwanghwamun, central Seoul, for the past three years. The political party, established in 2016, has advocated for workers, farmers and small business owners while calling for the withdrawal of U.S. troops from Korea.

On June 3, about 20 members of the People's Democracy Party held a rally in the form of a press conference in Gwanghwamun Square, protesting the death of George Floyd, who died from suffocation in Minneapolis police custody last month. Protesters held up a sign that read: “U.S. imperialism means ‘I can’t breathe.’”

The next day, the protesters again gathered in Gwanghwamun and called for the expulsion of U.S. Ambassador to Seoul Harry Harris from Korea.

While groups are required to report to police before holding a rally, the People's Democracy Party claimed that they were exempted from the requirement because they were holding press conferences.

Police are conducting an internal investigation into whether the June 3rd press conference should be considered a rally. However, the June 4th gathering was determined to be a press conference, and thus exempt from the reporting requirement.

“When gathering the event’s goals, actions and content of the remarks, the June 4th event was determined to be a press conference," a police official told the JoongAng Ilbo.

In accordance with the Assembly and Demonstration Act, courts have considered press conferences to be rallies if there is repetition of chants or people holding up banners and pickets.

The U.S. Embassy made an inquiry to the police soon after the June 4 protest, asking about the difference between a press conference and a rally and whether rallies held in the pretext of press conferences could be blocked. The embassy suggested such a rally could be stopped for breaking social distancing requirements amid the coronavirus pandemic.

“Ambassador Harry Harris saw the press conference and inquired to police about it through a security manager," a police official said.

It's rare for the U.S. Embassy to make such requests directly to the police, rather than the Korean Ministry of Foreign Affairs.

“I’ve never seen someone from the U.S. Embassy inquire about managing of rallies in all my time working at the Foreign Affairs Bureau," a former senior official at the Korean National Police Agency said.

Police explained that a press conference cannot be disbanded just because it is believed to have become a rally and that “under law and principle, only in cases where it clearly could bring about danger can it be disbanded.”

Rallies that are not reported to authorities can be punished under law. However, a press conference falls under the scope of “freedom of speech” guaranteed under the Constitution.

The People's Democracy Party has previously claimed that they were holding a "political party speech session" after being warned about the police over unreported rallies.

The U.S. Embassy has been a target of anti-American rallies in recent months.

In October 2019, members of the Korean Progressive University Student Union held a rally in front of the U.S. ambassador’s residence in central Seoul protesting U.S. demands for the exponential increase of Korea’s contribution toward the bilateral defense cost-sharing agreement. The U.S. State Department expressed concern over this rally.

Last December, another civic group, the People’s Sovereignty Solidarity, attempted to stage a performance showing the decapitation of the ambassador but it was blocked by police.

U.S. Ambassador Harris tweeted on June 4: "I disagree w/these protestors but respect their right to peacefully protest here in democratic ROK,” using the acronym for the Republic of Korea.